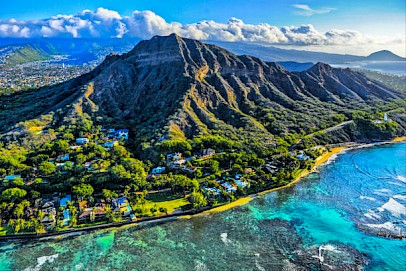 Despite a grave warning from the United Nations about the impending danger of climate change, state officials believe Hawaii is making good progress toward protecting the environment.

Earlier this month, the U.N.’s Intergovernmental Panel on Climate Change released its Sixth Assessment Report about how climate change is affecting the global environment.

The report, drawn from years of data gathered since the Fifth Assessment Report in 2013, paints a grim picture of unprecedented and accelerated climate change over the last several decades and extrapolates a potential future where global average temperatures increase by more than 10 degrees Fahrenheit by the end of the century.

Since preindustrial times, human activities already have caused the average temperature of the planet to increase by about 1 degree Celsius, or nearly 2 degrees Fahrenheit, the report stated.

While the report does not include data specifically about Hawaii, the report’s most dire scenario predicts the Pacific Ocean will warm by nearly 1 degree Celsius by 2040, local air temperature will increase by nearly 2 degrees Celsius, and local sea levels will rise by about 0.2 meters, or nearly 8 inches.

Based on the report’s most optimistic scenario, humanity will have to immediately begin curtailing carbon dioxide emissions, dropping to zero emissions by 2050, to keep the temperature from rising more than an additional 1.5 degrees Celsius, which has been identified as the maximum allowable temperature increase before risking catastrophic impacts around the world, ranging from a sharp uptick in extreme weather events to biosphere collapse.

However, Hawaii Sustainability Coordinator Danielle Bass said Hawaii, at least, is on track to meet that deadline.

“The state of Hawaii has acknowledged anthropogenic climate change years ago,” Bass said, noting that Hawaii was much faster to do so than many other states and nations. “We’ve already got laws in place to address it.

“We’re doing a very good job, actually, although we could do more,” she continued.

The state has set a goal to shift entirely to clean energy by 2045, Bass said, and already has introduced a wide variety of programs to pave the way toward that goal. However, she went on, the state will need to introduce more climate resilience measures — after all, she said, even the IPCC’s most optimistic scenario will result in rising sea levels, ocean acidification and an increase in severe weather.

The state Department of Transportation released a Climate Resilience Action Plan earlier this year examining how the state’s roadways might be impacted by the various effects of climate change.

Although the report states that most of the Big Island’s highways are not immediately threatened by sea level rise, the increased chance of powerful storms will increase the chance of landslides throughout the state and will require more frequent road maintenance.

Bass said that assessment only targeted state roads, however, and areas such as Banyan Drive will almost certainly be impacted by rising sea levels.

A 2017 DOT report determined that most of the Big Island’s state highways are at low risk of impact from sea level rise, with the exception of Highway 19 along the Hilo Bayfront, which is at “moderate” risk.

Beyond the island’s roads, Bass noted that the state’s hurricane shelters could benefit from additional funding, as the frequency and severity of tropical storms is likely to increase over the next few decades.

With impending changes to the local climate, Bass said the state will ultimately have to reconsider how its economy is structured in order to survive.

“We need to have way more food security than we do now,” Bass said, adding that Hawaii is too isolated to rely on agriculture from the mainland, particularly if supply chains are disrupted by climate events.

Bass said the state’s ecology also will become more fragile over the years. A 2017 report on coral bleaching by the Department of Land and Natural Resources concluded that several fishing practices, such as SCUBA spearfishing — which was banned from the Big Island’s western waters in 2013 — would have to be entirely curtailed in order to allow reefs to recover.

“We want to see a diversified economy. We don’t want to be so reliant on tourism,” Bass said, acknowledging the negative climate impacts caused by 10 million yearly visitors to the state. According to a 2017 report by the European Parliament, international aviation may account for up 22% of all global carbon dioxide emissions by 2050.

But Hawaii may have options.

This year, the state Legislature passed House Bill 683, which establishes a grant program to benefit businesses in Hawaii that are developing products related to sustainable aviation fuel, which produces up to 80% less carbon emissions than traditional aviation fuel.

Hamakua Rep. Mark Nakashima, who introduced the bill, said there are several companies in the state working on developing a cleaner electrolysis system to generate hydrogen-based aviation fuel, which would generate significantly fewer emissions.

“Hydrogen, when it’s burned, produces only water, so it’s a lot cleaner than normal fuel,” Nakashima said, adding that the manufacture of conventional jet fuel also uses some amount of hydrogen that could be synthesized more cleanly.

Unfortunately, no commercial aircraft currently in existence uses hydrogen fuel as a power source. European aerospace corporation Airbus has plans to produce a line of fuel-cell-powered aircraft by 2035.

Closer to the ground, Nakashima said he hopes the county’s first hydrogen buses will begin operating in Kailua-Kona soon, although their launch has been repeatedly delayed. They were supposed to arrive on-island in May, but have still yet to be retrofitted.

Bass noted that the state’s actions might be insignificant compared to the global action necessary to mitigate climate catastrophe, but expressed confidence that Hawaii is doing what it can.

“What this report shows us is that this will be an important decade — it’s the decade of action,” Bass said.

“Locally, we’ve got to do what we can, but this will be a collaborative effort around the world.”