‘Green’ aluminum inches closer in Pacific Northwest, if only they can power the last remaining smelter 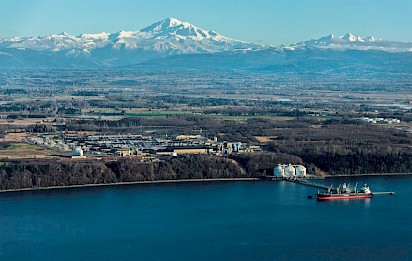 The push to restart the Pacific Northwest’s last remaining aluminum smelter got a boost last week. It also absorbed a setback as officials debate the value of domestic production and how to allocate the region’s finite, low-cost hydropower.

The prospective new owners of the idled Alcoa Intalco Works smelter near Ferndale, Washington, secured $10 million in taxpayer support to upgrade the decades-old factory. But the smelter requires a significant amount of energy to operate. And that is now the central problem. The Bonneville Power Administration said it turned down a request for reduced-rate electricity to operate the big facility. Talks are ongoing though since the stakes are high.

On Thursday, Washington Gov. Jay Inslee signed into law an updated state construction budget. That budget includes a $10 million line item to make efficiency and pollution reduction improvements to the potlines inside the Intalco smelter. The legislation justified the public spending by noting that the plant upgrades would greatly reduce the smelter’s greenhouse gas emissions — to the tune of at least 750,000 tons per year.

However, a BPA spokesman said Thursday that while it’s sympathetic to the cause, it doesn’t have enough available power to sell, nor can it meet the desired price.

“We can’t do that and we’ve relayed that information to them,” agency senior spokesman Doug Johnson said in an interview from Portland.

Echoing that sentiment is a trade group of public utilities across the Pacific Northwest. They purchase power from BPA and are urging the federal agency to stand firm. The executive director of the Portland-based Public Power Council, Scott Simms, argued that the region’s public utilities have first right to take any extra low-cost federal hydropower if it existed. Simms said his organization objected to BPA making a “sweetheart deal” to restart the Ferndale smelter.

“It would be illegal and unjust,” Simms said in an email this week. “We cannot support the request of this private equity investment firm to acquire and restart Alcoa’s Intalco aluminum smelter at the expense of citizens and other businesses who would essentially subsidize that new venture.”

“The prospect of reopening the former Intalco facility in Ferndale is a vital opportunity — not only for the jobs and economic opportunity it represents for northwest Washington but as a sign of our national commitment to enhancing America’s competitiveness and investing in clean manufacturing technology,” Gov. Inslee wrote in a letter to BPA Administrator John Hairston, one of a bunch of similar missives the federal power marketing agency received.

“It is my sincere hope that the day is not far off when this revitalized facility can reopen, in part through continued constructive discussions with BPA,” Inslee also said in his letter.

‘We have crossed our toes and fingers’

Whatcom County Executive Satpal Sidhu said in an interview with public radio that he is very concerned about Blue Wolf Capital’s difficulty in securing affordable power for the energy-intensive smelting process.

“It is becoming more and more unclear if they will be able to pass this hurdle of electricity rates,” Sidhu said Thursday. “We have crossed our toes and fingers while we wait for the outcome of this.”

Sidhu said there is a “substantial” difference between market rates for electricity and the reduced industrial rate Blue Wolf Capital is seeking.

“It’s like 50% less,” Sidhu said. “Such a large electrical consumer needs a favorable rate to be able to be viable.”

Johnson said BPA tentatively discussed how it might supply a fraction of the smelter’s desired power at the market price. The smelter though would have to assemble a “portfolio” of other electricity sources to operate at full capacity. Johnson said the electric load the smelter represents is roughly equivalent to 40% of the average demand of all the customers in Seattle.

“We’re continuing to talk,” Johnson said. “We’d like to see Blue Wolf succeed in their efforts to reopen the plant and bring jobs to the Northwest.”

The state subsidy for the smelter’s modernization is being funneled through the Washington State Department of Commerce. A spokeswoman there said the public funds would not be disbursed until the project is deemed “viable and moving forward.”

Smelting in the Northwest

In spring 2020, Alcoa announced it was mothballing — “curtailing” in industry-speak — its Ferndale operation due to weakening demand and falling metal prices. Soon thereafter, aluminum prices rebounded and they recently reached record highs. A spokesman for the Pittsburgh-based aluminum giant previously told public radio that Alcoa would keep the Ferndale smelter idled though because of numerous shortcomings that limit “its competitiveness for the long term.”

The spot price of aluminum has surged in 2022, partly because of war-related sanctions on Russia. Friday’s closing price on the London Metal Exchange was $3,502 per metric ton, which is over 60% higher than a year ago and more than double the price when Alcoa shut down the Ferndale smelter in 2020. Russia is a major producer of the shiny metal in the global context.

Intalco supporters point out that the Ferndale smelter could replace 100% of the aluminum imported to the U.S. from Russia last year. According to figures compiled by market research firm Harbor Aluminum, the U.S. imported 215,000 tons of unwrought aluminum from Russia in 2021. That volume is in the same ballpark as the annual output of the Intalco smelter at full production of 240,000 MT/year.

The smelter began operations in 1966. During the latter half of the 20th century, an abundance of cheap, public hydropower supported 10 large aluminum smelters in Washington, Oregon and Montana. But when power prices crept up around the turn of the century and global competition stepped up, one by one they all winked out except for the Alcoa smelter north of Bellingham.

The argument in favor of restarting the smelter revolves not only around restoring domestic manufacturing capacity and family-wage jobs, but also pioneering the production of “green” aluminum. Local and state officials have repeatedly said the combination of zero-emissions Northwest hydropower and plant upgrades to significantly reduce air pollution would allow the revived Ferndale smelter to stand out as a “sustainable,” environmentally-friendly aluminum producer.