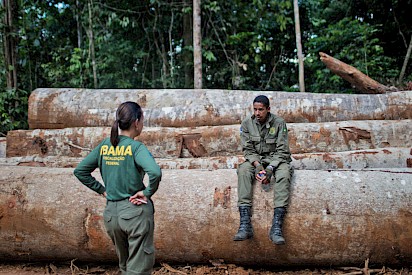 The Jair Bolsonaro presidency in Brazil has been marked by loosening regulations and budget cuts for environmental agencies, leading to soaring rates of Amazon destruction since he took office in 2019. Now, a new study quantifies what researchers call the “political negligence” of these policies, finding that nearly 98% of deforestation alerts were not investigated.

Published in March in the journal Environmental Research Letters, the study found that IBAMA, Brazil’s federal environmental protection agency, issued infraction notices or embargoes in response to just 1.3% of deforestation alerts in the Amazon in 2019 and 2020. The study authors call this “worrisome,” given that almost 99% of deforestation alerts in Brazil correspond to some form of environmental violation. The area covered by these alerts represents 6.1% of the total deforested area in the Amazon.

“The government receives alerts of deforestation, yet we don’t see this being transformed into action,” lead author Marcondes Coelho-Junior, from the Federal Rural University of Rio de Janeiro, told Mongabay by phone. “It’s not a lack of information that’s causing inaction. It’s not like [the government] didn’t know there was deforestation. But due to environmental policy weaknesses, there wasn’t any regulatory action for those alerts.”

The deforestation alerts that served as a source for the study were published by MapBiomas, a collaborative network of environmental groups, research institutions and technology companies that monitor land use in Brazil with satellite imagery. They’re sent directly to federal agencies and available for public viewing.

The study shows that even the regions targeted by the federal government as environmental priorities have struggled under the Bolsonaro administration’s inaction. IBAMA issued infraction notices or embargoes for just 3% of the 22,583 alerts in the 11 municipalities prioritized by the National Council for the Amazon, accounting for 12% of the area deforested within that region. The council was created by the Bolsonaro administration to coordinate efforts to protect the rainforest.

Activists say the lack of response is no accident, and that the destruction of environmental safeguards is a core policy for Bolsonaro, who is running for a second term in October’s elections.

The Bolsonaro government has systematically slashed the budget for land monitoring, reducing Brazil’s environmental agencies’ capacity to carry out their work effectively, according to a 2021 report from the Observatório do Clima, or the Climate Observatory, a network of Brazilian civil society organizations advocating for climate action. In 2020, the budget was reduced by 9.8%, then by another 27.4% in 2021.

Environmental agencies like IBAMA are essential for protecting the Amazon. They monitor for environmental violations such as deforestation and illegal fires, and impose sanctions and other enforcement measures to hold violators accountable. A 2019 study found that if IBAMA’s monitoring and law enforcement were not in place between 2007 and 2016, the Amazon would have lost an additional 338,000 square kilometers (130,500 square miles) — almost five times what was cut down during that period.

However, changes to IBAMA since Bolsonaro took office at the start of 2019 have delayed the process of issuing thousands of infraction notices. Among the changes is the addition of a conciliation phase before fines are imposed, according to the Climate Policy Initiative (CPI),  a nonprofit think tank.

“The conciliation hearings are either not happening, or the hearings take too long,” Maria Laura Canineu, Brazil director at Human Rights Watch, told Mongabay by phone. According to a CPI report, the number of infraction notices fell by 56% in 2020 compared to 2018, despite deforestation rates increasing by 47% during that period.

The number of fines imposed for environmental violations has also dropped. Infractions issued by IBAMA that were paid fell from an average of 688 per year from 2014 to 2018, to just 44 per year in 2019 and 2020, according to a survey carried out by the Federal University of Minas Gerais. Environmentalists say the drop in infraction notices and fines paid by offenders could incentivize environmental crime.

“Criminal networks operate with the sensation of complete liberty, especially in the Amazon region,” Canineu said.

Despite budget cuts, money is not the issue. Congress granted 219 million reais ($46 million) to IBAMA in 2021 to increase its field inspection operations. Yet, the federal environmental agency only spent 41% of that amount last year, with the leftover 131 million reais ($27.5 million) allocated for spending this year. Under previous administrations, IBAMA spent between 86% and 92% of its capital resources on inspection operations.

“This is why the problem is not exactly a lack of money,” Suely Araújo, a co-author of the recent study, former head of IBAMA and senior researcher at the Climate Observatory, told Mongabay by phone. “It’s more than a lack of willpower to [combat deforestation]. It’s the destruction, by the government, of environmental policies.

IBAMA and the Ministry of Environment didn’t reply to Mongabay requests for comment.

According to Coelho-Junior’s study, state efforts to penalize environmental crimes have been more successful than federal efforts. The research found that state environmental agencies in Mato Grosso , considered Brazil’s breadbasket, imposed enforcement action for 25% of deforested areas detected by alerts. This area corresponds to 100,000 hectares (247,100 acres), six times larger than the area investigated by federal agencies within Mato Grosso, which is one of Brazil’s nine Amazonian states and the country’s largest beef and soy producer, according to official records.

Mato Grosso’s success boils down to strengthening actions against illegal deforestation by using near-real-time monitoring technology since the second half of 2019, according to the study. The findings show the number of infraction notices issued increased by 33% in 2020, and the total area embargoed by state agencies rose by 192%. After this new effort, the infraction notices imposed by the state environment department led to 906 million reais ($190 million) in fines for environmental violations in 2020, the study showed.

“It’s not all roses, though,” Coelho-Junior said. “There’s still 53% of deforested area in Mato Grosso in 2019 and 2020 without any enforcement actions or liability identified.”

The study suggests that the federal government needs to strengthen enforcement procedures while states should continue to control deforestation within their territory. “Our analysis calls for federal agencies to resume their powers and state agencies to recognize their role in environmental reinforcement and assign liability,” the authors concluded.

In a move breaking with his policy trends to date, Bolsonaro on May 24 issued a decree updating the framework of prescribed punishment for environmental violations. Published in the official gazette, the decree raises the amount of fines for falsifying documents to cover up illegal logging to 50 million reais ($10.5 million) from the previous 1 million reais ($200,000). It also doubles the fines for infractions affecting conservation units or their buffer zones, among other measures.

The decree is considered one of the Bolsonaro administration’s first concrete actions to comply with its commitment, made at the COP26 climate summit in November 2021, to halt illegal deforestation.

Past success in reducing deforestation

Previous Brazilian governments have proven that it’s possible to significantly reduce deforestation by investing in public policies, private agreements, and monitoring systems. One of the most successful federal actions against deforestation was implementing the Action Plan for the Prevention and Control of Deforestation in the Legal Amazon (PPCDAm) in 2012, which resulted in an 84% reduction in deforestation compared to a historical peak of 27,772 km2 (10,722 mi2) in 2004. The president at the time the PPCDAm was implemented was Dilma Rousseff.

“However, it seems that the successful lessons in fighting illegal deforestation are being ignored by the current federal government,” according to the research paper. In 2019, the PPCDAm was shut down by the Bolsonaro administration and replaced by Operation Green Brazil, which deployed the military in the fight against environmental violators. However, according to a report from Climate Policy Initiative, this proved to be costly and failed to prevent deforestation and punish offenders.

“Brazil should use its past lessons,” Coelho-Junior said. “If we already have a history of how it’s possible to control deforestation and reduce it, why not learn from it and put this into practice now.”