Global warming has made Arctic summers hottest for 2,000 years

The Arctic has warmed as a result of climate change, despite the Earth being farther from the sun during summer months 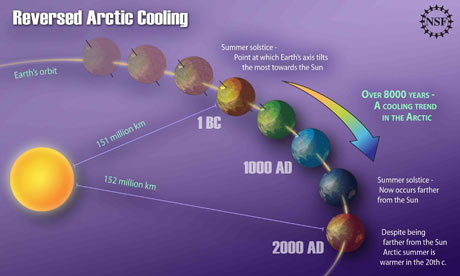 Global warming has nullified the effect of increasing distance between the sun and Earth during the Arctic summer solstice. Photograph: National Science Foundation

Warming as a result of increased levels of greenhouse gases in the atmosphere has overwhelmed a millennia-long cycle of natural cooling in the Arctic, raising temperatures in the region to their highest for at least 2,000 years, according to a report.

The Arctic began to cool several thousand years ago as changes in the planet’s orbit increased the distance between the sun and the Earth and reduced the amount of sunlight reaching high northern latitudes during the summer.

But despite the Earth being farther from the sun during the northern hemisphere’s summer solstice, the Arctic summer is now 1.2C warmer than it was in 1900.

Writing in the US journal Science, an international team of researchers describe how thousands of years of natural cooling in the Arctic were followed by a rise in temperatures from 1900 which accelerated briskly after 1950.

The warming of the Arctic is more alarming in view of the natural cooling cycle, which by itself would have seen temperatures 1.4C cooler than they are today, scientists said.

“The accumulation of greenhouse gases is interrupting the natural cycle towards overall cooling,” said Professor Darrell Kaufman, a climate scientist at Northern Arizona University and lead author of the study.

“There’s no doubt it will lead to melting glacier ice, which will impact on coastal regions around the world. Warming in the region will also cause more permafrost thawing, which will release methane gas into the atmosphere,” he added.

Scientists fear that warming could release billions of tonnes of methane from frozen soils in the Arctic, driving global temperatures even higher.

On a tour of the Arctic this week, UN secretary general Ban Ki-moon urged nations to support a comprehensive accord to limit greenhouse gas emissions ahead of the organisation’s climate summit in Copenhagen in December. The accord has been drawn up as a successor to the Kyoto Protocol, which expires in 2012.

The latest study comes months after scientists at the US National Oceanic and Atmospheric Administration (NOAA) warned that within the next 30 years Arctic sea ice is likely to vanish completely during the summer for the first time.

Kaufman and his colleagues reconstructed a decade-by-decade record of the Arctic climate over the past 2,000 years by analysing lake sediments, ice cores and tree rings. Computer simulations of changes in seasonal sunlight levels caused by the Earth’s elliptical orbit and the shifting tilt of its axis verified the long-term cooling trend.

The scientists showed that summer temperatures in the Arctic fell by an average of 0.2C every thousand years, but that this cooling was swamped by human-induced warming in the 20th century.

“This study provides a clear example of how increased greenhouse gases are now changing our climate, ending at least 2,000 years of Arctic cooling,” said Caspar Ammann, a climate scientist and co-author of the report at the National Centre for Atmospheric Research in Boulder, Colorado.

The Arctic began cooling around 8,000 years ago as natural variations in the Earth’s orbit and angle of tilt reduced the amount of sunlight reaching high latitudes. Today, the planet is one million kilometres farther away from the sun during the northern hemisphere’s summer solstice than it was in 1BC. This natural cooling effect will continue for 4,000 more years.

Previous research has shown that temperatures over the past century rose nearly three times as fast in the Arctic as elsewhere in the northern hemisphere. This is due to an effect called Arctic amplification, whereby highly reflective sea ice and snow melt to reveal darker land and sea water, which absorb sunlight and warm up more quickly.