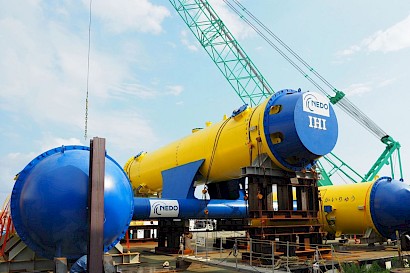 Power-hungry, fossil-fuel dependent Japan has successfully tested a system that could provide a constant, steady form of renewable energy, regardless of the wind or the sun.

For more than a decade, Japanese heavy machinery maker IHI Corp. has been developing a subsea turbine that harnesses the energy in deep ocean currents and converts it into a steady and reliable source of electricity. The giant machine resembles an airplane, with two counter-rotating turbine fans in place of jets, and a central ‘fuselage’ housing a buoyancy adjustment system. Called Kairyu, the 330-ton prototype is designed to be anchored to the sea floor at a depth of 30-50 meters (100-160 feet).

In commercial production, the plan is to site the turbines in the Kuroshio Current, one of the world’s strongest, which runs along Japan’s eastern coast, and transmit the power via seabed cables.

“Ocean currents have an advantage in terms of their accessibility in Japan,” said Ken Takagi, a professor of ocean technology policy at the University of Tokyo Graduate School of Frontier Sciences. “Wind power is more geographically suited to Europe, which is exposed to predominant westerly winds and is located at higher latitudes.” Japan’s New Energy and Industrial Technology Development Organization (NEDO) estimates the Kuroshio Current could potentially generate as much as 200 gigawatts — about 60% of Japan’s present generating capacity.

Like other nations, the lion’s share of investment in renewables has gone into wind and solar, especially after the Fukushima nuclear disaster curbed that nation’s appetite for atomic energy. Japan is already the world’s third largest generator of solar power and is investing heavily in offshore wind, but harnessing ocean currents could provide the reliable baseline power needed to reduce the need for energy storage or fossil fuels.

The advantage of ocean currents is their stability. They flow with little fluctuation in speed and direction, giving them a capacity factor — a measure of how often the system is generating — of 50-70%, compared with around 29% for onshore wind and 15% for solar.

In February, IHI completed a 3 ½ year-long demonstration study of the technology with NEDO. Its team tested the system in the waters around the Tokara Islands in southwestern Japan by hanging Kairyu from a vessel and sending power back to the ship. It first drove the ship to artificially generate a current, and then suspended the turbines in the Kuroshio.

The tests proved the prototype could generate the expected 100 kilowatts of stable power and the company now plans to scale up to a full 2 megawatt system that could be in commercial operation in the 2030s or later.

Like other advanced maritime nations, Japan is exploring various ways of harnessing energy from the sea, including tidal and wave power and ocean thermal energy conversion (OTEC), which exploits the difference in temperature between the surface and the deep ocean. Mitsui OSK Lines Ltd. has invested in UK-based Bombora Wave Power to explore the potential for the technology in Japan and Europe. The company is also promoting OTEC and began operating a 100 kW demonstration facility in Okinawa in April, according to Yasuo Suzuki, general manager of the corporate marketing division. Kyushu Electric’s renewable unit Kyuden Mirai Energy begins a 650 million yen ($5.1 million) feasibility test this year to produce 1 MW of tidal power around the Goto Islands in the East China Sea.  The government this month also proposed changes to offshore wind auctions that could speed up development.

Among marine-energy technologies, the one advancing fastest towards cost-effectiveness is tidal stream, where “the technology has advanced quite a long way and it definitely works,” said Angus McCrone, a former BloombergNEF chief editor and marine energy analyst. Scotland-based Orbital Marine Power is one of several companies constructing tidal systems around Orkney, location of the European Marine Energy Centre. Others include SIMEC Atlantis Energy’s MeyGen array and California-based Aquantis, founded by US wind pioneer James Dehlsen, which reportedly plans to start testing a tidal system there next year.

While tidal flows don’t run 24 hours, they tend to be stronger than deep ocean currents. The Kuroshio current flows at 1 to 1.5 meters per second, compared with 3 meters per second for some tidal systems. “The biggest issue for ocean current turbines is whether they could produce a device that would generate power economically out of currents that are not particularly strong,” said McCrone.

Ocean Energy Systems, an intergovernmental collaboration established by the International Energy Agency, sees the potential to deploy more than 300 gigawatts of ocean energy globally by 2050.

But the potential for ocean energy is location dependent, taking into account the strength of currents, access to grids or markets, maintenance costs, shipping, marine life and other factors. In Japan, wave energy is moderate and unstable through the year, while areas with strong tidal currents tend to have heavy shipping traffic, Takagi said. And OTEC is better suited to tropical regions where the temperature gradient is bigger. One of the advantages of the deep ocean current is it doesn’t restrict navigation of ships, IHI said.

Still, the Japanese company has a long way to go. Compared with onshore facilities, it’s much more complicated to install a system underwater. “Unlike Europe, which has a long history of the North Sea Oil exploration, Japan has had little experience with offshore construction,” said Takagi. There are major engineering challenges to build a system robust enough to withstand the hostile conditions of a deep ocean current and to reduce maintenance costs.

“Japan isn’t blessed with a lot of alternative energy sources,” he said. “People may say that this is just a dream, but we need to try everything to achieve zero carbon.”

With the cost of wind and solar power and battery storage declining, IHI will also need to demonstrate that overall project costs for ocean current power are competitive. IHI aims to generate power at 20 yen per kilowatt-hour from large-scale deployment. That compares with about 17 yen for solar in the country and about 12-16 yen for offshore wind. IHI also said it conducted an environmental assessment before it launched the project and will use the test results to examine any impact on the marine environment and fishing industry.

IHI has to make a convincing argument that “Japan could benefit from being a technology leader in this area,” he said.