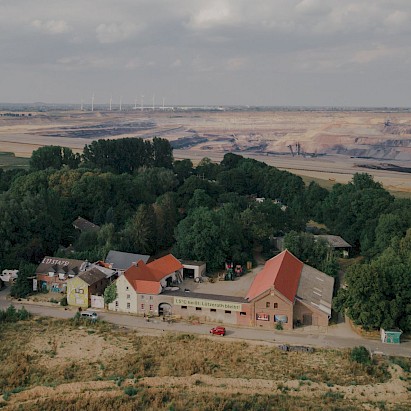 LÜTZERATH, Germany — For months, die-hard environmental activists have camped in the fields and occupied the trees in this tiny farming village in western Germany, hoping that like-minded people from across the country would arrive and help stop the expansion of a nearby open-pit coal mine that threatened to swallow the village and its farms.

They had reason to be optimistic. Mass protests led the German government to step in and save an old-growth forest from coal expansion just two years ago. And the Green party notched its best showing ever in elections last year, a sign of how fighting climate change had become a winning political issue in Europe’s largest economy.

“If there were 50,000 on the street, politicians would have to do something,” said Eckardt Heukamp, 58, the last farmer remaining in Lützerath, who put up some of the protesters in apartments on his property. Others built tree houses, pitched tents or moved into abandoned houses in the village.

But the hoped-for surge in protesters never materialized. And last week, the government effectively sealed Lützerath’s fate by announcing that RWE, Germany’s largest energy company, needed the coal under the village — to make up for gas that had stopped flowing in from Russia.

The war in Ukraine, and the looming prospect of a winter without cheap Russian fuel, has cooled enthusiasm in Germany for greener policies, at least for now. In a nation that has pledged to wean itself off coal entirely by 2030, it has been an abrupt retreat — and for some, a difficult one.

“Putin’s war of aggression is forcing us to temporarily make greater use of lignite so that we save gas in electricity generation,” said Robert Habeck, the German economy minister and a former leader of the Green party, referring to the low-grade coal under the village. “This is painful but necessary in view of the gas shortage.”

Russia once supplied more than half of Germany’s gas imports — a major source of fuel for heating. After the Russian invasion of Ukraine set off a chain reaction of European sanctions and Russian countermeasures, that flow was shut off. From the start of the war, the German government knew it would have to scramble for fuel to get through the coming winter.

In June, Mr. Habeck announced the reopening of some coal plants — a bitter pill after the Greens’ success, just months earlier, at getting the new government to speed up its exit from coal by eight years. When a drought this summer compounded energy jitters by slowing coal transport on rivers, the government gave cargo trains carrying coal and other fuels priority over passenger ones.

And yet so far, there has been little public backlash.

A poll taken this summer found that 56 percent of Germans were in favor of turning coal plants back on, with just 36 percent against. That compares to the 73 percent of the population who supported ending coal use “as soon as possible” in a 2019 poll.

Part of the reason for the lack of protesters in Lützerath may have been wariness among many about taking on a losing battle.

“We’re hearing from many that they simply can’t face it,” said Cornelia Senne, a theologian who recently led an overnight church service outside Mr. Heukamp’s front door. “With all that’s going on, some people cannot bear to watch another catastrophe unfold.”

Though tens of thousands of climate activists marched in cities across Germany in late September, they focused their demands mainly on issues like climate justice for developing countries and accessible public transport — not the end of coal in Germany.

Since the crisis began, Germany has seen a nearly 5 percent rise in coal-generated electricity. Coal currently accounts for nearly a third of all electricity made in Germany.

Much of that coal comes from places like the Garzweiler mine near Lützerath, which is owned by RWE and where some of the world’s biggest digging machines continuously work the sprawling 12-square-mile pit.

For decades, when coal was a way of life in much of Germany, residents of communities like Lützerath accepted the inevitability of coal mining, including a legal requirement to move and make way when state governments struck deals with energy companies like RWE. Since World War II, some 300 German villages have been razed for the coal beneath them.

But activists had hoped to draw the line in Lützerath, once a village of about 90 people, and make the fight to save it a cause célèbre. Even if they failed, it seemed, the town might be the last German village to be wiped out for coal mining.

Even many climate activists concede that Germany will need to use more so-called “hard” coal this winter. But they insist that does not justify the demolition of Lützerath, which sits above deposits of lignite, the more polluting, softer variety.

“We are in a schizophrenic situation: We are going for a 2030 exit, but we are still allowing RWE to go for lignite in Lützerath,” said Karsten Smid, a German climate and energy campaigner at Greenpeace. “If you are doing this for the energy crisis, you don’t need Lützerath’s coal.”

Calculations by energy experts published in August suggested that the coal under Lützerath is actually not needed even with a short-term increase in demand this winter.

German officials, however, suggest that any increase in coal emissions will be offset by the fact that RWE has agreed to the 2030 deadline for an end to coal use.

While emissions from coal will likely increase this winter, Andrzej Ancygier, a Berlin-based analyst at Climate Analytics, says it is too early to know by how much.

“At this point crunching the numbers doesn’t make sense yet, because there are just too many factors,” said Mr. Ancygier, citing weather conditions and the question of when France will be able to reactivate its huge fleet of nuclear power plants and begin exporting the electricity they generate to Germany.

Mr. Ancygier said changes to rules on burning coal will not affect Germany’s long-term progress on renewable energy, which he predicts will continue to make up an ever-bigger portion of Germany’s power mix. German lawmakers agreed to a new set of rules in July promoting renewables by making them more lucrative for smaller producers.

But small and medium-sized businesses worry they will be facing bankruptcy before they can make it to warmer weather, and households are preparing for power outages if the winter is exceptionally cold.

The protesters in Lützerath — balaclava-clad environmental activists, middle-class residents from nearby towns and a religious community that recently carried a cross around the village — say they are exhausted by their efforts but plan to keep fighting.

One activist, who refused to take off his white face covering or give his real name out of fear of legal retribution, has lived in a treehouse in Lützerath since the spring, and said he was prepared for a showdown with the police when the bulldozers finally come.

Even with the sound of the mining machines in the distance, Mr. Heukamp had stubbornly refused to give in, planting crops in the spring and harvesting in the summer and fall. He harvested the last of this season’s wheat in August.

But at the beginning of this month, Mr. Heukamp finally gave up, packing up his equipment and abandoning his family farm.

Blaming state politics for the decision to go ahead with the destruction of his farm, he said: “If they had wanted to save this village, they could have done it.”

RWE has not said when the bulldozers will move in to level the farm Mr. Heukamp left behind.