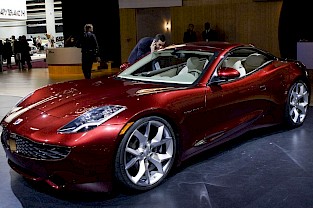 Foxconn Technology Group, 2317 5.43% the world’s biggest electronics contract manufacturer, has agreed to assemble cars for electric-vehicle startup Fisker Inc., FSR -2.24% the latest deal for the Apple iPhone assembler in its eager expansion into the automotive sector over the past year.

Taipei-based Foxconn and Los Angeles-based Fisker have signed a memorandum of understanding to jointly produce more than 250,000 vehicles a year, the companies said in a statement Wednesday.

While the exact location has yet to be determined, Fisker Chief Executive Henrik Fisker said there is a very good chance initial production will be in the U.S., in part because Foxconn already has a factory in Wisconsin.

“They’ve got a factory there and quite a lot of land with quite a lot of possibility for expansion,” he said in an interview. “We haven’t made a final decision on that but that’s an obvious one.”

Shares in Fisker leaped 39% on the news, to $22.58. Fisker began trading publicly in October after merging with a special-purpose acquisition company backed by private-equity firm Apollo Global Management Inc. The shares now are up 152% since the merger closed.

The Foxconn collaboration is for Fisker’s second model—a higher-volume electric car that the company aims to start building in the fourth quarter of 2023, the companies said. The car would be built on vehicle underpinnings developed by Foxconn and would be sold in North America, Europe, China and India, they added.

For Foxconn, the Fisker deal is the latest in a series of tie-ups with auto makers to jointly develop or build vehicles, including the then- Fiat Chrysler Automobiles N.V. —now Stellantis N.V.—and China’s Zhejiang Geely Holding Group.

In recent years, some electric-vehicle startups like Fisker have been focusing on designing cars while outsourcing vehicle production, in a challenge to the traditional business model in the automotive sector, in which established car makers designed and produced their own vehicles.

The deal with Fisker is the first in which Foxconn will actually manufacture the vehicles, and its first with a U.S.-based electric-vehicle company.

The auto industry is confronting a wave of new tech companies and startups looking to break into the business, an effort being driven in part by new technologies like electric cars and autonomous driving that are reshaping the competitive landscape. Among them is Apple Inc., which has for years worked to develop its own car and recently held talks with Hyundai Motor Group to assemble an autonomous vehicle at a Kia Corp. plant in Georgia. The talks have since broken down, The Wall Street Journal reported.

Foxconn, formally known as Hon Hai Precision Industry Co. 2317 5.43% , has been looking to diversify beyond its core business of contract manufacturing for electronics.

It has also made multiple attempts to expand manufacturing in the U.S. In 2017, Foxconn said it would invest $10 billion to build a liquid-crystal display factory in Wisconsin to produce large-screen televisions and other devices, a project that was praised by then-President Donald Trump. But since then Foxconn has scaled back its ambitions to a smaller facility that would make smaller touch screens, and has been in a dispute with Wisconsin state officials over the scope of the project.

In October, Wisconsin officials said Foxconn had failed to create enough jobs to receive subsidies in 2019. Foxconn said then that it has achieved employment levels of more than 520 people—the minimum required for subsidies—and that it has invested $750 million in Wisconsin, including more than a half a billion dollars for the factory.

In making a push into automotive, Foxconn recently launched a new project to offer a customizable kit of base technology that manufacturers can use for developing electric and self-driving cars.

The company said earlier this year the initiative, dubbed MIH, would be led by a co-founder of Chinese electric-car company NIO Inc.

Fisker is one of several automotive startups that has ridden a wave of investor enthusiasm for purely electric-vehicle companies over the past year. It was founded in 2016 by Mr. Fisker, a well-known designer who formerly worked at BMW and Aston Martin.

Unlike other upstarts that have or are building their own plants, Fisker is taking an asset-light approach to developing its business, leaning on contractors to supply it with everything from manufacturing to the service and maintenance centers. Executives say that will help them sidestep the billions of dollars in capital auto makers traditionally spend on assembly plants.

“The last thing an EV startup should be looking to do is build its own factory,” Mr. Fisker told the Journal last year. “I think it’s a really dumb idea, quite frankly.”

Fisker instead focuses on design, software and engineering. For its debut model, a luxury sport-utility vehicle called the Ocean set to launch late next year, it is outsourcing the vehicle manufacturing to auto supplier Magna International Inc.

The company, which has told investors it expects its first revenues in 2022, is set to update investors on the results of its first quarter as a publicly traded company after Thursday’s close.