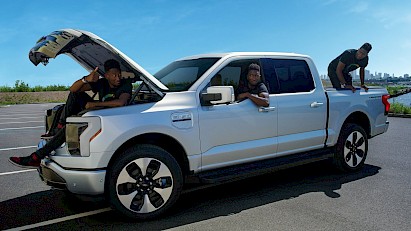 Ford Motor on Tuesday became the latest automaker to raise the price of electric vehicles when it significantly increased prices of its popular F-150 Lightning because of rising materials costs.

The company began making the Lightning in April and had sold more than 4,400 through the end of July. Ford has taken reservations for more than 200,000, and the higher prices will go into effect for the 2023 model year.

Ford said it was increasing the starting prices of the truck by $6,000 to $8,500 for newly ordered vehicles. After the increase, the truck will cost from $46,974 for a base model to $96,874 for a Platinum version with an extended-range battery pack.

The increases do not affect customers who have already placed orders and are waiting for their trucks. Reservations give customers a spot in line to place an order to buy a truck. Ford stopped taking orders because of strong demand but said it would resume doing so on Thursday, when the new prices go into effect.

“We’ve announced pricing ahead of reopening order banks so our reservation holders can make an informed decision around ordering a Lightning,” said Marin Gjaja, chief customer officer for Ford’s electric vehicle division, known as Model e, in a statement.

Other automakers have also been raising prices of their electric cars. Tesla has increased the price of its Model 3 and Model Y by thousands of dollars in recent months, with the cars now starting around $47,000 and $66,000.

All car prices, including for conventional gasoline models, have been rising because of a shortage of computer chips that has prevented manufacturers from producing as many vehicles as consumers want to buy. The price of electric vehicles has also been going up because the supply of materials needed to make batteries has not kept up with fast-growing demand. The costs of raw materials have also been affected by disruptions caused by the coronavirus pandemic and Russia’s war in Ukraine. Ford executives said in July that the company expected material costs to rise about $4 billion this year.

The climate and health care bill known as the Inflation Reduction Act working its way through Congress could help make electric vehicles more affordable by offering buyers tax credits. But many current models like the F-150 Lightning may not qualify because the bill requires that a certain percentage of a car’s battery be made in North America with materials from allies. The percentage would have to increase every year for cars to continue qualifying for the tax break.