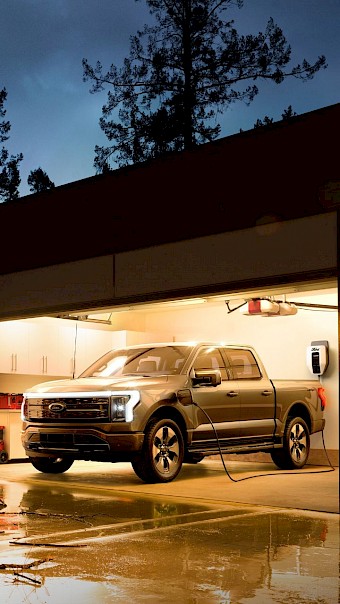 Ford Motor has opened a major new front in the battle to dominate the fast-growing electric vehicle market, and it’s banking on one of the world’s most powerful business franchises.

In a splashy presentation Wednesday night at a Ford plant in Dearborn, Mich., the automaker unveiled an electric version of its popular F-150 pickup truck called the Lightning. Ford’s F-Series trucks, including the F-150, make up the top-selling vehicle line in the United States, and typically generate about $42 billion a year in revenue, according to a study commissioned by Ford — or more than twice what McDonald’s brought in last year.

It was one of the most anticipated introductions of a new car and invited comparisons to Ford’s Model T, the car that made automobiles affordable to the masses. Ford has a lot at stake in the new vehicle’s success. If it can turn the F-150 Lightning into a big seller, it could accelerate the move toward electric vehicles, which scholars say is critical for the world to avoid the worst effects of climate change.

Tailpipe pollution from cars and trucks represents the largest source of greenhouse gas emissions in the United States and one of the largest in the world. But if the Lightning does not sell well, it could suggest that the transition to E.V.s will be far slower than President Biden and other world leaders need to achieve climate goals.

“The F-150 will put electric vehicles in a totally different realm,” said Michael Ramsey, a Gartner analyst. “It’s huge for Ford, but also huge for the whole industry. If you’re going to electrify the whole vehicle fleet in the United States, the F-150 going electric is a big step in that direction.”

The F-150 Lightning signals a shift in the auto industry’s E.V. push, which has been aimed at niche markets, so far. Tesla has grown rapidly for several years by selling flashy sports cars to the affluent and early adopters. It sold close to 500,000 cars globally last year, a little more than half as many F-Series trucks Ford sold. Other electric models that have sold well have been small cars, such as the Chevrolet Bolt and Nissan Leaf, that appeal to environmentally minded consumers.

The F-150 Lightning, in contrast, is aimed at small businesses and corporate customers such as building contractors and mining and construction companies that buy lots of rugged pickups. These buyers typically care not just about the sticker price of a truck but also how much it costs to operate and maintain. Electric vehicles tend to cost more to buy but less to own than conventional cars and trucks because they have fewer parts and electricity is cheaper than gasoline or diesel on a per mile basis.

“There are a lot of big fleets who have been looking for green solutions but haven’t had any answers until now,” William C. Ford Jr., the company’s chairman and a great-grandson of Henry Ford, said in an interview.

Ford’s chief executive, Jim Farley, told CNBC on Thursday that the company had taken reservations for 20,000 Lightning trucks in less than 12 hours after its Wednesday event.

With an electric motor mounted on each of its axles, the vehicle will offer more torque — in effect, faster acceleration — than any previous F-150 and will be capable of towing up to 10,000 pounds. Its battery pack can power a home for about three days during an outage, according to Ford.

For contractors and other commercial truck users, the Lightning will be able to power electric saws, tools and lighting, potentially replacing or reducing the need for generators at work sites. It has up to 11 power outlets.

“It’s made to be on the work site and to work all day long,” said Ted Cannis, general manager of Ford’s North American commercial vehicle business.

The truck’s base price is a few thousand dollars less than that of a Tesla Model 3 and even that of the company’s own Mustang Mach-E sport-utility vehicle. The total cost is lower still because buyers of Ford’s electric vehicles still qualify for the $7,500 federal tax credit available for the purchase of E.V.s. Some states such as California, New Jersey and New York offer additional rebates worth as much as $5,000.

Mr. Cannis said Ford was able to keep the price of the electric model down by using the seats and other parts that go into conventional F-Series trucks. Ford typically sells 900,000 of those vehicles a year, giving it substantial economies of scale.

General Motors and start-ups like Rivian are also working on electric pickups. Rivian has said it will start delivering its truck, the R1T, this summer and G.M. is expected to sell the GMC Hummer pickup later this year.

A big question about electric pickups is whether many people will buy them. Beyond commercial buyers, trucks like the F-150, Chevrolet Silverado and the Ram tend to be bought by people who have a lot of stuff to haul or by people — usually men — who like driving trucks.

“There will probably be some initial raised eyebrows, but once we get people to experience the driving dynamics and the extra room, the skepticism will abate,” Mr. Ford said.

The F-Series trucks have been the top-selling model line in the United States for the last 44 years. A 2020 study by the Boston Consulting Group found that the truck supports 500,000 jobs at Ford, parts suppliers and dealerships.

Ford’s introduction of the Lightning got a major boost from Mr. Biden, who on Tuesday visited the company’s Rouge Electric Vehicle Center where the pickup will be made. Before a pool of White House reporters gathered at the plant, Mr. Biden pulled up behind the wheel of a prototype covered in black-and-white camouflage sheeting used to conceal the shape of the truck ahead of the Wednesday event.

“This sucker’s quick,” Mr. Biden said, and let slip that the truck can zoom to 60 miles an hour in 4.4 seconds, a detail that wasn’t supposed to be released until Wednesday. Mr. Biden then zoomed off, reaching a top speed of 80 m.p.h.

The Secret Service normally does not allow presidents to drive. Ford officials were not sure Mr. Biden would drive the truck until he arrived at the Rouge center, but it’s not a surprise he did.

Mr. Biden is a well known car enthusiast and owns a green 1967 Corvette that was given to him by his father as a wedding present. In 2016, he and his Corvette appeared on an episode of “Jay Leno’s Garage,” in which he drove the car at an enclosed Secret Service training facility.

Ford’s plan to produce an electric truck in the Midwest with union labor closely aligns with the Biden administration’s goal to cut greenhouse gas emissions, increase domestic manufacturing, support unions and accelerate the transition to electric vehicles. The batteries for the Lightning will be made by SK Innovation, a South Korean company, at a factory in Commerce, Ga. On Thursday, Ford said it and SK Innovation would form a joint venture, BlueOvalSK, to manufacture battery cells and modules in the United States, starting in the middle of this decade.

The administration’s $2 trillion infrastructure proposal includes money to help build half a million charging stations and incentives for the purchase of electric vehicles.

Ford has said it plans on spending $22 billion to develop electric vehicles over a five-year period ending in 2025.

Other automakers are moving in the same direction. G.M. is spending a similar sum and has said it aims to produce only electric vehicles by 2035, setting a target date for phasing out the internal combustion engine, which has powered the auto industry for more than a century.

G.M. recently introduced an updated version of its electric car, the Chevrolet Bolt. It also plans to make an electric version of its popular Silverado pickup truck, which is one of the biggest competitors to the F-150.