For Many, Hydrogen Is the Fuel of the Future. New Research Raises Doubts. 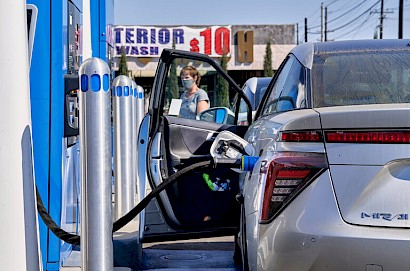 It is seen by many as the clean energy of the future. Billions of dollars from the bipartisan infrastructure bill have been teed up to fund it.

But a new peer-reviewed study on the climate effects of hydrogen, the most abundant substance in the universe, casts doubt on its role in tackling the greenhouse gas emissions that are the driver of catastrophic global warming.

The main stumbling block: Most hydrogen used today is extracted from natural gas in a process that requires a lot of energy and emits vast amounts of carbon dioxide. Producing natural gas also releases methane, a particularly potent greenhouse gas.

And while the natural gas industry has proposed capturing that carbon dioxide — creating what it promotes as emissions-free, “blue” hydrogen — even that fuel still emits more across its entire supply chain than simply burning natural gas, according to the paper, published Thursday in the Energy Science & Engineering journal by researchers from Cornell and Stanford Universities.

“To call it a zero-emissions fuel is totally wrong,” said Robert W. Howarth, a biogeochemist and ecosystem scientist at Cornell and the study’s lead author. “What we found is that it’s not even a low-emissions fuel, either.”

To arrive at their conclusion, Dr. Howarth and Mark Z. Jacobson, a professor of civil and environmental engineering at Stanford and director of its Atmosphere/Energy program, examined the life cycle greenhouse gas emissions of blue hydrogen. They accounted for both carbon dioxide emissions and the methane that leaks from wells and other equipment during natural gas production.

The researchers assumed that 3.5 percent of the gas drilled from the ground leaks into the atmosphere, an assumption that draws on mounting research that has found that drilling for natural gas emits far more methane than previously known.

They also took into account the natural gas required to power the carbon capture technology. In all, they found that the greenhouse gas footprint of blue hydrogen was more than 20 percent greater than burning natural gas or coal for heat. (Running the analysis at a far lower gas leak rate of 1.54 percent only reduced emissions slightly, and emissions from blue hydrogen still remained higher than from simply burning natural gas.)

Such findings could alter the calculus for hydrogen. Over the past few years, the natural gas industry has begun heavily promoting hydrogen as a reliable, next-generation fuel to be used to power cars, heat homes and burn in power plants.

In the United States, Europe and elsewhere, the industry has also pointed to hydrogen as justification for continuing to build gas infrastructure like pipelines, saying that pipes that carry natural gas could in the future carry a cleaner blend of natural gas and hydrogen.

While many experts agree that hydrogen could eventually play a role in energy storage or powering certain types of transportation — such as aircraft or long-haul trucks, where switching to battery-electric power may be challenging — there is an emerging consensus that a wider hydrogen economy that relies on natural gas could be damaging to the climate. (At current costs, it would also be very expensive.)

The latest study added to the evidence, said Drew Shindell, a professor of earth science at Duke University. Dr. Shindell was the lead author of a United Nations report published this year that found that slashing emissions of methane, the main component of natural gas, is far more vital in tackling global warming than previously thought. In a new report published this week, the U.N. warned that essentially all of the rise in global average temperatures since the 19th century has been driven by the burning of fossil fuels.

The hydrogen study showed that “the potential to keep using fossil fuels with something extra added on as a potential climate solution is neither fully accounting for emissions, nor making realistic assumptions” about future costs, he said in an email.

The Hydrogen Council, an industry group founded in 2017 by BP, Shell, and other big oil and gas companies, did not provide immediate comment. The group recently co-authored a report with McKinsey & Company that estimated that the hydrogen economy could generate $140 billion in annual revenue by 2030 and support 700,000 jobs. The study also projected that hydrogen could meet 14 percent of total American energy demand by 2050. BP declined to comment.

In Washington, the latest bipartisan infrastructure package devotes $8 billion to creating regional hydrogen hubs, a provision originally introduced as part of a separate bill by Senator Joe Manchin, a Democrat from West Virginia, a major natural gas producing region. Among companies that lobbied for investment in hydrogen were NextEra Energy, which has proposed a solar-powered hydrogen pilot plant in Florida.

Some other Democrats, like Representative Jamie Raskin of Maryland, have pushed back against the idea, calling it an “empty promise.” Environmental groups have also criticized the spending. “It’s not a climate action,” said Jim Walsh, a senior energy policy analyst at Food & Water Watch, a Washington-based nonprofit group. “It’s this is a fossil fuel subsidy with Congress acting like they’re doing something on climate, while propping up the next chapter of the fossil fuel industry.”

Jack Brouwer, director of the National Fuel Cell Research Center at the University of California, Irvine, said that hydrogen would ultimately need to be made using renewable energy to produce what the industry calls green hydrogen, which uses renewable energy to split water into its constituent parts, hydrogen and oxygen. That, he said, would eliminate the fossil and the methane leaks.

Hydrogen made from fossil fuels could still act as a transition fuel but would ultimately be “a small contributor to the overall sustainable hydrogen economy,” he said. “First we use blue, then we make it all green,” he said.

Today, very little hydrogen is green, because the process involved — electrolyzing water to separate hydrogen atoms from oxygen — is hugely energy intensive. In most places, there simply isn’t enough renewable energy to produce vast amounts of green hydrogen. (Although if the world does start to produce excess renewable energy, converting it to hydrogen would be one way to store it.)

For the foreseeable future, most hydrogen fuel will very likely be made from natural gas through an energy-intensive and polluting method called the steam reforming process, which uses steam, high heat and pressure to break down the methane into hydrogen and carbon dioxide.

Blue hydrogen uses the same process but applies carbon capture and storage technology, which involves capturing carbon dioxide before it is released into the atmosphere and then pumping it underground in an effort to lock it away. But that still doesn’t account for the natural gas that generates the hydrogen, powers the steam reforming process and runs the CO2 capture. “Those are substantial,” Dr. Howarth of Cornell said.

Amy Townsend-Small, an associate professor in environmental science at the University of Cincinnati and an expert on methane emissions, said more scientists were starting to examine some of the industry claims around hydrogen, in the same way they had scrutinized the climate effects of natural gas production. “I think this research is going drive the conversation forward,” she said.

Plans to produce and use blue hydrogen are moving ahead. National Grid, together with Stony Brook University and New York State, is studying integrating and storing hydrogen into its existing gas infrastructure. Entergy, the Gulf Coast utility, plans to use existing oil-industry hydrogen pipeline networks to ship hydrogen to replace natural-gas-fired power.

Entergy believed hydrogen was “part of creating a long-term carbon-free future,” complementing renewables like wind or solar, which generate power only intermittently, said Jerry Nappi, a spokesman for the utility. “Hydrogen is an important technology that will allow utilities to adopt much greater levels of renewables,” he said.

National Grid referred to its net zero plan, which says hydrogen will play a major role in the next few decades and that producing hydrogen from renewable energy was the linchpin.

New York State was “exploring all technologies” including hydrogen in support of its climate goals, said Kate T. Muller, a spokeswoman for the state’s Energy Research and Development Authority. Still, its researchers would “review and consider the blue hydrogen paper,” she said.