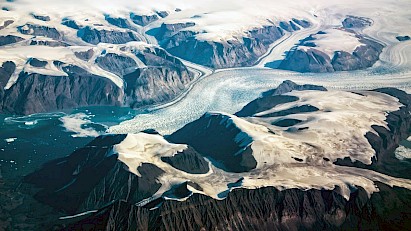 In Greenland, it’s feeling more like July than September.

After a fairly cold and wet summer in Greenland, an unusually late heat wave last weekend caused extensive melting across the ice sheet — the kind of melt typically seen in the middle of summer. Researchers say it’s the largest melt event to occur in September, according to data sets spanning nearly four decades.

“This event demonstrates how global warming does not only increase the intensity but also the length of the melting season,” Maurice van Tiggelen, a polar scientist from Utrecht University in the Netherlands, said in an email.

The first day of September typically marks the end of the Greenland melt season, as the sun moves lower in the sky and temperatures usually cool. Yet over the weekend, temperatures began rising when a warm jet of air pushed northward across Baffin Bay and the western coast of Greenland. As a result, tens of billions of tons of ice were lost — an event that could further Greenland’s already significant contributions to rising sea levels.

As the climate shifts, researchers expect longer and stronger periods of warmth to affect the ice sheet — increasing overall melt.

Between Friday and Monday, several weather stations recorded their maximum air temperature for the entire year. Parts of western Greenland rose as high as 36 degrees Fahrenheit (20 degrees Celsius) above normal for this time of the year. The summit, traditionally the coldest part of the ice sheet, even rose above the melting point Saturday according to NOAA observations at the National Science Foundation’s Summit Station.

“It’s truly amazing to see a heat wave like this cover Greenland in September,” Ted Scambos, a senior research scientist at the University of Colorado, said in an email. “For the first time on record, temperatures at summit exceeded the melting point in September, on the afternoon of Sept. 3.”

The melt conditions also created obstacles for researchers in the area: Van Tiggelen and his colleagues were working on the southern part of the ice sheet but had to shorten their stay to avoid a large precipitation event. He also said the ice surface was slipperier than during visits on sunny days in previous years.

At peak melt Saturday, meltwater runoff rates clocked in as high as 12 billion tons per day — easily ranking as one of the top 10 largest runoff events on record, said climate scientist Xavier Fettweis.

Fettweis explained that meltwater runoff is important to track because it can reach the ocean and contribute to sea-level rise. A portion of the runoff can also be retained into the snowpack and refreeze during the winter. However, he said, this unusually late melting could favor the formation of ice slabs at the top of the snowpack. The ice slabs could prevent meltwater from percolating through the snowpack, meaning it could instead enter the ocean, further contributing to sea-level rise.

“If such events will occur in the next summers (which is very likely), the sea-level contribution will grow larger,” Fettweis wrote in an email.

In total, Greenland is estimated to have lost about 20 billion tons of ice during the weekend event, according to Scambos. That’s about 7 percent of total ice that is shed in a typical year. For every 360 billion tons of ice lost, the sea level rises by one millimeter.

Greenland is already the largest contributor to rising sea levels, outpacing the Antarctic ice sheet and mountain glaciers. Melt rates have increased over the ice sheet in the past two decades as the Arctic warms faster than the rest of the world. New research suggests that the ice sheet will lose about 3 percent of its current mass — a volume equal to just under a foot of sea-level rise — even if the world stopped emitting greenhouse gases today.

“Greenland’s ice margin can’t tolerate the conditions that are becoming increasingly common for it. This event is typical of those destabilizing conditions,” Scambos said.

Outside of the latest event, this year’s melt season in Greenland was fairly moderate. Before this heat wave, the most notable action was a “heat ripple” that caused moderate melting in mid-July, and the number of melt days was near average after the event.

Researchers are concerned about the long-term consequences of such extreme one-off events. Over time, a warmer temperature regime and a greater frequency of extremes would lead to more total melting of Greenland, hastening the loss of its mass.

This marks the second year in a row that an unusually late heat wave swept over the ice sheet. On Aug. 14, 2021, temperatures rose 18 degrees Celsius above average and caused it to rain at the summit of the ice sheet, some two miles above sea level, for the first time on record. At the time, researchers said it was the largest melt event to occur so late in the year.

Fettweis said both the August 2021 event and the current one were associated with large rainfall amounts and moist clouds invading the area, an increasingly common source for melt events on Greenland. He said these weather systems are “new in the ice sheet history.”

Meanwhile, abnormally warm temperatures and cloudy conditions continued over Greenland on Tuesday. Temperatures have recently been slightly warmer than 28.4 degrees Fahrenheit (minus-2 degrees Celsius) at the summit, while average temperatures elsewhere in the high Arctic are rapidly falling below freezing.

“The same basic weather flow is happening for an absolutely astonishing fourth day in a row,” said Christopher Shuman, a research scientist at the University of Maryland Baltimore County and NASA.