For companies eyeing net-zero carbon emissions, ‘no clue how to get there’ 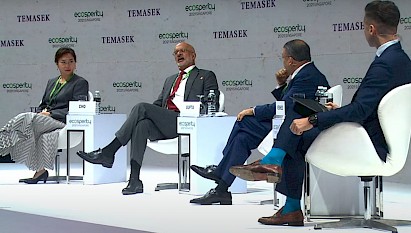 As companies and countries work toward a net-zero future, voluntary carbon markets have a crucial role to play, but curbing emissions is still most important, business leaders said at a sustainability conference in Singapore in September.

Voluntary carbon markets can drive huge amounts of finance into developing countries for conservation, serve as a price indicator for carbon, and help companies offset remaining emissions as they work to decarbonize, executives said at the Ecosperity event organized by Temasek, Singapore’s state investment firm.

In a report released at the conference by Temasek, Microsoft and consulting firm Bain & Company, researchers estimated Southeast Asia would need $2 trillion of investment over the next decade to cut emissions and remain competitive globally.

“The ADB (Asian Development Bank) estimates that about 40 per cent of infrastructure investments in Asia will need to come from the private sector,” Dale Hardcastle, Global Sustainability Innovation Center co-director and partner at Bain, told The Straits Times last week. “That South-east Asia’s governments are pandemic-strained further highlights the role the private sector must play in climate investments.”

Yet there’s been a dearth of private capital for developing countries. Laurence Fink, CEO of BlackRock, the largest asset management firm in the world, said last week that “the emerging world is losing global investors, not gaining.”

“[It] is seen to be fraught with more risk, more political instability and flip-flopping of governments,” Fink, who also attended Ecosperity, told The Business Times. “It’s very hard for me to see the trillions of dollars needed to help emerging countries move away from coal.”

Not all carbon credits are created equal

Voluntary carbon markets could help make up for this deficit of money flows, Standard Chartered CEO Bill Winters said in a prerecorded message for the panel, by moving “billions of dollars of funding from the pockets of [those] making net-zero commitments, into the hands of people who have the opportunity to actually reduce greenhouse gas emissions in the environment.”

This is especially so for Southeast Asian countries, whose vast swaths of carbon-sequestering forests are a source of offsets that can be tapped into, Gupta said. Forestry credits currently make up 84% of the region’s voluntary market transactions, the Bain report found.

Key to scaling up voluntary carbon markets is ensuring the quality of credits, said Sunny Verghese, co-founder and CEO of agribusiness giant Olam International and another speaker on the panel. “The fact that we have carbon prices [ranging] from $5 to as much as $100 shows that every carbon credit is not equal,” he said.

Because carbon credits aren’t a standardized commodity like gold or oil, credits from different projects tend to fetch different prices in the market. Within the particular sector of nature-based carbon credits — generated from projects that conserve and restore carbon-sequestering ecosystems — buyers tend to pay a premium for credits that come from more verifiable and credible projects, and those that bring about co-benefits such as community economic development and biodiversity conservation.

Singapore’s new carbon trading marketplace focused on nature conservancy projects, Climate Impact X (CIX), was launched earlier this year to address this problem, said Herry Cho, head of sustainability and sustainable finance at the Singapore Exchange and a fourth speaker at the panel.

In ensuring the quality of credits supplied and building up trust in the marketplace, CIX is banking on Singapore’s record for governance and infrastructure, and technology. The platform will use satellites, artificial intelligence and blockchain to verify the integrity of its projects, and ensure payments flow to communities instead of being siphoned away by middlemen, Gupta said.

When done right, such markets can provide a price for not only carbon credits, but carbon itself, with a high degree of confidence, integrity and visibility, Winters said. That would allow corporate and public sector leaders to make better decisions when choosing between technologies and processes to invest in to curb emissions — which remains the “primary focus,” he added.

Companies want to decarbonize, but are struggling

Companies that buy offsets to hit net-zero emission targets without a broader decarbonization strategy in place risk being guilty of greenwashing, Cho said. “As you look at that hard slog of trying to [curb absolute emissions], you will still have ongoing emissions. So that’s when … carbon credits can come in,” she said.

Businesses should choose specific types of credit-generating projects that contribute toward their overall decarbonization plan, she added. For instance, nature-based projects not only produce offsets, but also help companies get to net zero by stopping deforestation in their supply chains and directly reducing emissions.

Verghese said corporations recognize the need to curb emissions, but are struggling with choosing and implementing effective decarbonization solutions.

“I have spoken to at least 250 CEOs, all of whom have signed and committed to the science-based targets of the 1.5 degree pathway, and to get to net zero by 2050. And I can tell you, that not one of us have a clue of how we are going to get there,” he said.

The root issue is a lack of robust carbon measurement technology and methods, he said, adding that some 95% of Olam’s carbon emissions come from indirect emissions, known as scope three, that are hard to measure and manage.

Without the technology to do this, relying on voluntary carbon markets won’t be enough, said Verghese, who is also chairman of the World Business Council on Sustainable Development, with more than 200 member multinationals that have committed to reaching net zero by 2050. “If you don’t have the clear pathways on how we can take practical steps in reducing carbon footprint [and] just focus solely on carbon offsets,” he said, “we have lost this battle.”