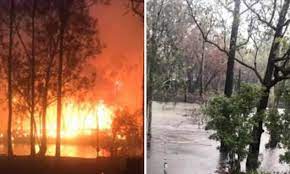 Global warming is greatly increasing the risk that extreme wildfires in the American West are followed by heavy rainfall, a new study has found, highlighting the need for better preparations for hazards, like mudslides and flash floods, that can cause devastation long after the flames from severe blazes are out.

Fires ravage forests, wreck homes and kill people and animals, but they also destroy vegetation and make soil less permeable. That makes it easier for even short bursts of heavy rain to cause flooding and runaway flows of mud and debris. Rains after wildfires can also contaminate drinking water by choking rivers and basins with sediment from eroded hillsides.

Scientists believe that human-caused climate change is bringing about more of the hot and dry conditions that lead to catastrophic fires. Warmer air can hold more moisture, which means rainfall is growing more intense, too.

Until now, though, climate researchers studying the Western United States hadn’t tried pinning down how often those two opposite extremes might occur in the same place within a short span of time, said Danielle Touma, a postdoctoral fellow at the National Center for Atmospheric Research in Boulder, Colo., and lead author of the new study.

Three months to half a year after a fire, before the soil and vegetation have had time to recover, “are the times when these events can be really risky,” Dr. Touma said. The study was published on Friday in the journal Science Advances.

Residents of Western states have seen plenty of these one-two punch weather disasters, and their harrowing consequences, in recent years.

In Montecito, Calif., mudslides killed more than 20 people and destroyed hundreds of homes in early 2018, just a month after huge wildfires there sheared the landscape. Severe flooding and mudslides last summer forced Colorado to shut down Interstate 70, a key artery for the entire Western United States, following record fires in the state the year before. Experts believe that wildfires during last year’s record heat wave in the Pacific Northwest worsened the damage from intense downpours that came less than six months later.

The new study uses computer models to project how the frequency of such combined events across the West might change under a high-global-warming scenario for the coming decades.

Climate scientists believe it is less likely than it once was that greenhouse-gas emissions from human activity will bring about such high levels of warming on their own. The authors of the study said that they expected smaller but still significant increases in rainfall following wildfires under less-pessimistic pathways for global warming.

The study finds that by the end of the century, more than half of days with extremely high wildfire risk in parts of the Pacific Northwest, Idaho, Nevada and Utah could be followed by severe downpours within a year. The fraction is smaller for California and Colorado, the study found, though it is still considerably more than the average between 1980 and 2005. And the increase is significant both within six months of severe fire days and within a year.

Western Colorado and most of the Pacific Northwest are also projected to see a jump in the chance of heavy rains within three months of dangerous fire conditions. In California, the wildfire season and the rainy season tend to be more separate during the year.

“Even by midcentury, some places are seeing a doubling or tripling” of risk, said Daniel L. Swain, a climate scientist at the University of California, Los Angeles, and another author of the study. “That’s not that far in the future, and that’s not that much more additional warming than we’ve already seen.”

Dr. Swain said he and his colleagues were struck that their computer models showed such a consistent increase in risk across the West, even though the region’s climate is so varied. California has dry summers and wet winters, while in Colorado, both flooding and wildfire peak during the warm season.

It doesn’t take much rain to trigger a debris flow on a recently burned slope, said Jason W. Kean, a hydrologist with the United States Geological Survey in Golden, Colo., who was not involved in the study. In some areas, as little as a fraction of an inch falling in 15 minutes might be enough, he said.

But as more wildfires occur in places where they hadn’t been a big problem before, scientists are working to understand how the thresholds might differ in those wetter climates, Dr. Kean said. “It’s a scramble for us to stay ahead of the game,” he said.

Dr. Touma conducted most of the analysis for the new study when she was a postdoctoral researcher at the University of California, Santa Barbara, not far from Montecito, which was devastated by post-fire mudslides in 2018. The authorities there had urged residents of certain areas to evacuate, but many chose not to.

“There was a lot of evacuation fatigue from the fire just one month before,” Dr. Touma said.

Residents of the West are generally very conscious of the risks of flooding and mud flows in burn zones, said Samantha Stevenson, an environmental scientist at the University of California, Santa Barbara, who also worked on the study. But “the degree to which they are increasing as a result of climate change, and the rapidity of that increase, is something that we should maybe try to be more aware of,” she said.