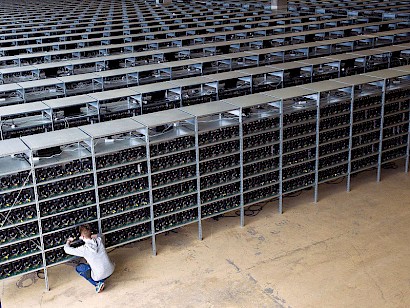 Across the nation, some states are trying to entice cryptocurrency mining companies to set up shop, offering tax incentives in the hopes of creating jobs and of expanding their footing in the tech industry.

In New York, lawmakers have moved in a different direction: In the waning hours of its 2022 session, the State Legislature last week unexpectedly passed a bill that would impose a two-year ban on new cryptocurrency mining permits, specifically at fossil-fuel burning plants, which some businesses have repurposed to power the energy-intensive activity.

The groundbreaking legislation, which would make New York the first state to enact such a moratorium, has the potential to influence regulations in other states or at the federal level.

The passage of the bill marked a significant defeat for a burgeoning, deep-pocketed industry at the hands of a grass-roots coalition of left-leaning lawmakers, climate activists and even winemakers, who argued that there would be an environmental cost to future cryptocurrency mining.

“Other blue states could potentially introduce legislation like this, based on the efforts of the environmental lobby,” said John Olsen, the lead representative in New York for the Blockchain Association, an industry group that opposed the moratorium. “That’s certainly a concern.”

It is not clear, however, whether Gov. Kathy Hochul will sign the bill. And the cryptocurrency industry is expected to invest heavily in efforts to persuade her to reject the measure and to seek to influence other industry-friendly regulations in Albany.

Ms. Hochul’s campaign has already received $40,000 from Ashton Soniat, the chief executive of Coinmint, which has a crypto-mining operation on the grounds of a former aluminum plant in Massena, N.Y., a small town northeast of Niagara Falls.

A far larger political gift has gone to Ms. Hochul’s lieutenant governor, Antonio Delgado, who is facing two primary challengers this month. A super PAC, backed by the founder of FTX, a major cryptocurrency exchange, has spent roughly $1 million on digital ads in the last few weeks in support of his campaign, according to state filings.

Michael Levine, a spokesman for the super PAC, said it was solely focused on supporting candidates it believes will back pandemic readiness measures. But the five ads it is running statewide also highlight Mr. Delgado’s work on climate change, infrastructure, abortion and schools.

The firm is also paying $12,000 a month to a consulting firm, Hinman Straub, to lobby the state government on cryptocurrency regulations, according to state records. Sam Bankman-Fried, the founder of FTX, said in a statement that the company had applied for a trust charter to operate in New York and has been engaged in conversations with regulators about its application.

The governor, a moderate Democrat facing a primary election on June 28, has been noncommittal on whether she would sign the bill, a priority of environmental activists and the party’s left flank. Ms. Hochul likely won’t have to make a decision until Dec. 31.

“We’ll be looking at all the bills very, very closely,” Ms. Hochul said during a news conference in Manhattan on Tuesday. “We have a lot of work to do over the next six months.”

Ms. Hochul has previously said that she was “open minded” about the moratorium, but that she was also mindful of not enacting legislation that could impede job creation in the upstate communities, where many of the mining operations are based.

Bitcoin mining is a verification process essential to the Bitcoin economy. Powerful computers plug into the Bitcoin network and perform complex mathematical tasks to confirm the legitimacy of transactions, making quintillions of numeric guesses a second. As a reward for this service, the digital miners receive new Bitcoins, providing a financial incentive to keep the computers running.

In Bitcoin’s early years, a crypto enthusiast could mine coins by running software at home, but as digital assets have become more popular, the amount of power necessary to generate Bitcoin has soared.

As cryptocurrencies have grown in value, Bitcoin mining has become a major industry. There are publicly traded crypto mining companies like Riot Blockchain and Marathon Digital Holdings, worth hundreds of millions of dollars. Though estimates vary, there appear to be 19 mining operations in New York that are either fully operational or that could be by the end of the year, according to Assemblywoman Anna Kelles, a Democrat who sponsored the bill in the lower chamber.

The measure passed by the Democratic-controlled State Legislature is meant to narrowly target crypto-mining companies looking to repurpose some of the oldest, dirtiest fossil fuel plants in New York as they are taken out of service.

For the next two years, the bill would place a moratorium on new projects that utilize fossil-fuel plants to generate “behind the meter” electricity for crypto-mining, and require the state to study the industry’s impact.

“Any delay in signing the bill puts our state at a serious risk of many old, inefficient, retired power plants being purchased and turned back on for consolidated crypto-mining operations for private profit,” Ms. Kelles said.

The proposed ban drew intense opposition from national cryptocurrency industry groups that worried the moratorium could be a precursor for similar regulations nationwide, and some lawmakers who said it unfairly targeted the fledgling industry.

The industry has had a warmer welcome in other states, leading some opponents of the ban to argue that those interested in mining in New York may simply relocate. Last year, Kentucky passed a pair of bills creating tax incentives for crypto-mining companies. Legislation proposed in Illinois in January would modify a state law to extend incentives to mining companies that set up shop there. And Texas and Georgia have both adopted friendly postures toward the industry.

“It’s a shame the Legislature has voted to impose a moratorium on Bitcoin miners in New York,” Perianne Boring, president of the Chamber of Digital Commerce, an industry advocacy group, said in a statement. “This is a significant setback for the state and will stifle its future as a leader in technology and global financial services.”

The bill had passed the Assembly in April, but it had stalled for weeks in the Senate until it was unexpectedly revived and passed just before the Senate gaveled out of session early Friday morning, following frenzied lobbying efforts and late night discussions.

Senator Kevin Parker, a Democrat from Brooklyn who sponsored the bill, said that it was not meant to discourage the industry. “If folks want to do cryptocurrency mining in the state of New York, which I’m very open to, then we need to do it in a sustainable way,” he said.

The legislation in New York comes after China cracked down on crypto mining last year, forcing some operations to relocate to the United States. Some miners are now reviving broken-down coal plants, or using low-cost natural gas, to power their computers.

In New York, the spaces available for such businesses are former power plants scattered across upstate that were among the state’s most polluting and inefficient. Restarting them would reverse the reductions in greenhouse gas emissions that those shutdowns achieved. That would slow the state’s progress toward climate goals that it is legally bound to meet, amid growing concern that it is already behind schedule.

The bill would not affect crypto mining projects that draw electricity from the grid. But some supporters say those, too, should be banned because they would hog precious electricity as the state scrambles to electrify houses, buildings and cars to meet climate goals.

The moratorium also would not affect existing projects like the highly debated one in Greenidge, on Seneca Lake, even though residents and tourism businesses in the surrounding Finger Lakes region championed the bill to prevent similar projects from taking root.

Also unaffected are boutique crypto miners, like individuals who operate from their homes, an important distinction meant to preserve crypto’s potential benefit to marginalized people, according to Ms. Kelles.

The Senate had passed a broader version of the cryptocurrency moratorium bill last year, but it failed to gain sufficient traction in the Assembly. When the moratorium proposal resurfaced in 2022, during an election year for state lawmakers, it quickly became a hot-button issue as environmental groups renewed their push and the cryptocurrency industry began to marshal its own lobbying forces.

While some Democrats facing potential primaries from the left came under pressure to support this and other environmental legislation, others spoke out forcefully against it, arguing it would kill jobs and unfairly target one industry while letting other energy-intensive industries off the hook.

“I think the majority of members still don’t understand the industry and the technology,” said State Senator Jeremy Cooney, a Democrat from Rochester, who opposed the moratorium. “This is bigger than cryptocurrency. This is about, will New York be an open and inviting place to do business and engage in emerging technologies.”

Lobbyists from two national groups — the Blockchain Association and the Digital Currency Group — also inserted themselves into the debate in New York, seeing the defeat of the bill as necessary to avoid similar legislation from spreading nationwide.

Even so, environmental groups kept clamoring, and so did Ms. Kelles, who called and texted her counterparts in the Senate to lobby them directly.

Senator Liz Krueger, a high-ranking Democrat from Upper Manhattan, said she also called and texted colleagues to convince them to switch their votes, and lobbied others in-person at the State Capitol on Thursday night.

“Smart entrepreneurs going into the field of cryptocurrency will realize they can build a better mousetrap and get us to buy that if they’re not destroying our environment,” she said.