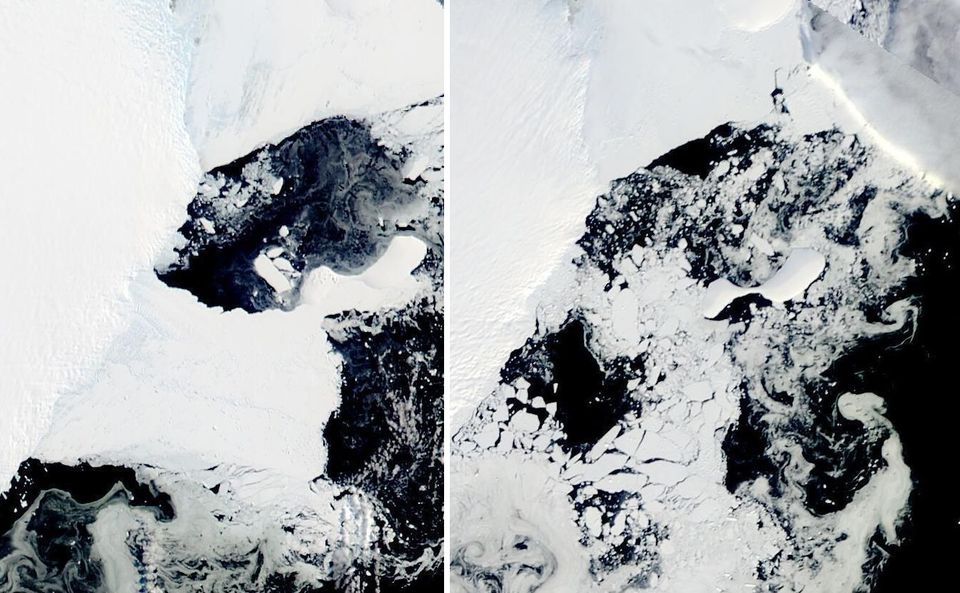 The fate of the world’s biggest ice sheet rests in the hands of humanity, a new analysis has shown. If global heating is limited to 2C, the vast East Antarctic ice sheet should remain stable, but if the climate crisis drives temperatures higher, melting could drive up sea level by many metres.

The East Antarctic ice sheet (EAIS) holds the vast majority of Earth’s glacier ice. Sea levels would rise by 52 metres if it all melted. It was thought to be stable, but is now showing signs of vulnerability, the scientists said.

The EAIS is far larger than the West Antarctic ice sheet (WAIS), which hosts the so-called “doomsday” Thwaites glacier, which has lost significant stability. Total loss of the WAIS would cause 5 metres of sea level rise.

Sea level is rising faster today than for at least 3,000 years, as mountain glaciers and the Greenland ice cap melt, and ocean waters expand as they heat. Even a few metres of sea level rise will redraw the map of the world, with profound consequences for millions of people in coastal cities from New York City to Shanghai.

The Greenland ice sheet, which could deliver 7 metres of sea level rise, is on the brink of a tipping point after which accelerated melting would become inevitable, scientists warned in 2021. While the full impact of melting ice is felt over centuries, researchers warned that the level of carbon emissions over the next few decades will lock in future sea level rise. 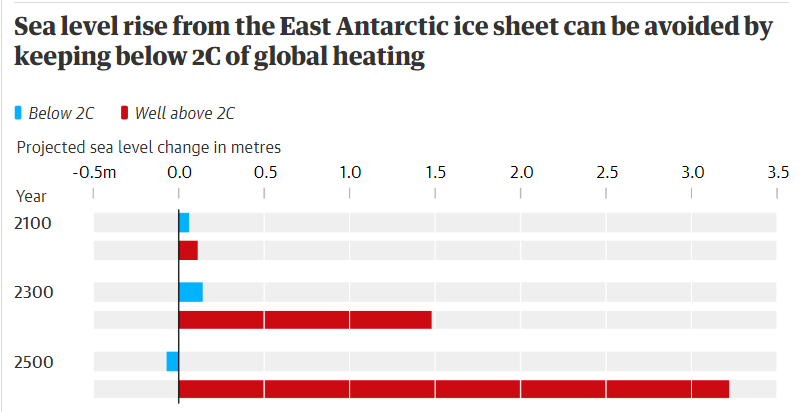 The analysis shows that keeping below 2C of global heating, the upper limit agreed by the world’s nations in the 2015 Paris climate agreement, would result in EAIS contributing less than 0.5m of sea level rise by 2300. But continued high emissions and a temperature rise well above 2C would result in a rise of 1.5 metres to 3 metres by 2300 and up to 5 metres by 2500.

“The fate of the EAIS remains very much in our hands,” said Prof Chris Stokes, at Durham University in the UK, who led the study. “This ice sheet is by far the largest on the planet and it’s really important that we do not awaken this sleeping giant. We used to think ice sheets in East Antarctica were much less vulnerable to climate change, compared to West Antarctica or Greenland, but we now know there are some areas already showing signs of ice loss.”

In March, the Conger ice shelf in East Antarctica collapsed, with scientists saying it was “a sign of what might be coming”. In 2018, scientists found that a group of glaciers spanning an eighth of the East Antarctic coastline were being melted by the warming seas.

The new analysis, published in the journal Nature, assessed the sensitivity of the EAIS to global heating using data on how it responded to higher global temperatures in the past, information on the changes happening now and computer simulations of possible futures.

Significant uncertainties remain, meaning the EAIS alone could cause more than 5 metres of sea level rise in a worst-case scenario. In the best case scenario, the EAIS may actually accumulate more ice, from snowfall, than it loses, meaning it would slightly reduce sea level.

Prof Andrew Mackintosh, at Monash University, Australia, who was not part of the study team, said: “Vast areas of East Antarctica remain understudied, including the most vulnerable basins that could contribute to sea level rise over coming centuries.”

“Our emissions choices will lead to very different future worlds,” Mackintosh said. ”Society needs to understand that one of the largest potential impacts of global warming – the widespread loss of ice from East Antarctica – is possible if climate warming exceeds about 2C.”

The analysis includes data from the geological past showing that the last time CO2 concentrations in the atmosphere were higher than today was about 3myears ago. Temperatures were then 2-4C higher – in the range the world could experience later this century – and sea level eventually rose 10-25 metres higher than at present. As recently as 400,000 years ago, part of the EAIS retreated 700km inland when global temperature rose only 1-2C.

Prof Nerilie Abram, a co-author of the analysis at the Australian National University, said: “A key lesson from the past is that the East Antarctic Ice Sheet is highly sensitive to even relatively modest warming scenarios. It isn’t as stable and protected as we once thought.

“We now have a very small window of opportunity to rapidly lower our greenhouse gas emissions, limit the rise in global temperatures and preserve the East Antarctic Ice Sheet,” she said.

The EAIS was thought to be stable as much of it sits above sea level, meaning that warming oceans cannot reach it and the only melting is from warmer air, which is a much slower process. In contrast, the WAIS sits below sea level. However, Stokes said: “Over the last decade or so, we’ve started to see the first twitches from the EAIS, with some glaciers retreating and thinning.”

Taking mountain glaciers and all ice caps into account, the Intergovernmental Panel on Climate Change projects between 0.28 metres and 1 metre of sea level rise by 2100, depending on emissions.