Under the proposal, a “solidarity contribution” on excess profits generated from activities in the oil, gas, coal and refinery sectors will be applied for one year after entering into force with a review by Oct. 15, 2023, the commission said.

The levy will be collected on 2022 profits which are at least 20% above the average profits of the previous three years, charged at a rate of at least 33%, the commission said, adding the tax could bring in around Eur25 billion ($25.2 billion) of public revenues.

“The solidarity contribution is proposed as an exceptional measure to mitigate the impact of the energy crisis on households and companies across the EU,” the commission said in a statement. “Establishing this solidarity contribution as a European instrument will ensure that negative spillovers within the internal energy market stemming from uncoordinated national measures can be avoided and risks of litigation between companies and governments can be reduced substantially.”

The combined net earnings of Shell, BP, TotalEnergies, Equinor and Eni were over $37 billion in Q2 and most of the sky-high profits are being deployed to shareholders via higher dividends and expanded share buybacks.

A number of European countries, such as Italy and Hungary, have already introduced or proposed a windfall profit tax on energy firms in a bid to help subsidize soaring utility bills in the wake of Russia’s Feb. 24 invasion of Ukraine.

The UK in May imposed an “energy profits levy” on upstream production revenues, which raised the headline rate of tax from 40% to 65% and was dubbed a windfall tax by the industry. However, the UK’s new prime minister, Liz Truss, has pledged to support new development in the North Sea and does not support further windfall taxes on industry.

Calls for a broader windfall tax on oil and gas earnings have gained pace since the International Energy Agency in June flagged a “once-in-a-generation opportunity” to tax surging revenues from high oil and gas prices since the Ukraine war. At the time, the IEA estimated that oil and gas producers worldwide would earn a record $4 trillion in 2022, double 2021 levels and up from an average $1.5 billion in the recent past.

The EU’s plans for a windfall tax on oil and gas producers were first outlined on Sept. 7 by EC President Ursula von der Leyen, who said a “solidarity contribution” from oil and gas companies would support vulnerable households and boost investment in clean energy.

The proposal, which forms part of a package of EU emergency energy measures aimed at providing an EU-wide response to high energy prices, requires a qualified majority vote in the European Council to be approved, and its adoption will depend on the Council’s internal procedures.

European oil industry lobby group Fuels Europe said it was ready to discuss the proposal but voiced concern over double counting in countries that have already announced windfall taxes on the fossil fuel industry. It said the temporary tax should also apply to all fossil fuels suppliers to the EU and be set at a level that “would discourage adequate supplies.” It said the period used as the base years for regular fossil sector earnings should also be discussed as the 2019-2021 period includes the pandemic years when earnings were hit by a collapse in demand and prices.

“The solidarity contribution should respect the proportionality principle and should not impair the capacity to invest. Furthermore, current energy transition investments by companies should be taken into account,” Fuels Europe said.

Earlier in the week started Sept. 12, Shell said it was aware of the EU proposal for a “solidarity contribution” and “acknowledged the need for concerted policy and other action to alleviate the energy price crisis in Europe and elsewhere.”

Under the proposals, each EU member will be responsible for collecting and directing the funds from the tax to help offset high power and gas prices or accelerate clean energy projects, it said. The revenues would be collected by member states and redirected to energy consumers, in particular vulnerable households, hard-hit companies, and energy-intensive industries.

The commission said EU member states can also finance cross-border projects in line with its REPowerEU objectives or use part of the revenues for funding measures to protect employment or promote investment in renewables and energy efficiency.

The commission did not say when it expects its proposals to be approved but noted that a number of EU member states have said they plan to swiftly work on proposals in view of Europe’s emergency energy situation. 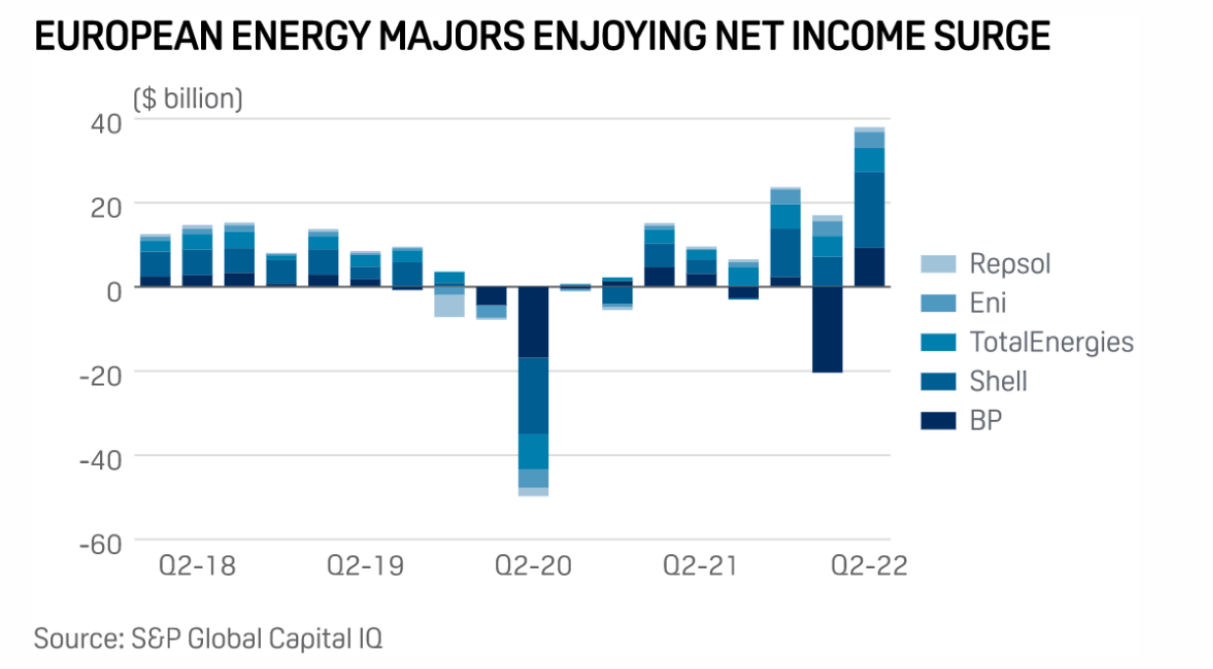