Energy in 2030 - US military for long-term energy guidance?

When in doubt, I always turn to the military for long-term guidance.

They plan ahead, fund new technologies, and adopt them earliest…

GPS, digital cameras, and a little thing called the Internet all came from the military.

So whenever the energy future looks uncertain (as it does now with oil low in its range, massive albeit contentious natural gas finds, and renewables, quite frankly, failing to launch), I look to see how the uber-planners in defense are going to play it.

Before, it was assumed energy would be where you needed when you needed it… We hadn’t defined energy innovation as important to military capability. The new strategy is to say that energy is a strategic good that enables your military force.

The new plan is broken down into three parts:

Shortly after the plan was announced, Gen. Patraeus sent this memo ordering the immediate conservation of fuel:

“Operational energy” is the lifeblood of our warfighting capabilities and a key enabler of Coalition operations in Afghanistan. Commanders will make energy-informed, risk-based decisions on aviation operations, vehicle operations, power and water generation…

Commanders will push for rapid technology transition of new fuel savings methods to the field, where appropriate, and will pursue existing, proven alternative energy options that reduce the use and transport of fuel.

Microcosm of Our Energy Problem

The Department of Defense uses more oil than any other entity on earth: as much as $18 billion worth per year, plus another $2 billion for electricity.

Half of the American casualties in Iraq and Afghanistan occur while guarding fuel convoys. One out of every 24 fuel convoys has led to the death of a soldier. There are upwards of 6,000 fuel convoys per year.

Gasoline and diesel can cost as much as $400 per gallon to deliver to the battlefield.

It’s a perfect microcosm of the greater United States: An egregious amount of taxpayer dollars spent on securing and transporting an increasingly outdated fuel supply that only results in further loss and vulnerability.

As always, the military is adopting a plan that will soon be followed by the entire nation.

By 2030, the military will be spending $10 billion per year on renewable energy. That’s about 50% of its current energy budget.

And that’s probably a good gauge of how this thing’s going to play out and how you should invest: half fossil fuel and half renewables in the next twenty years. 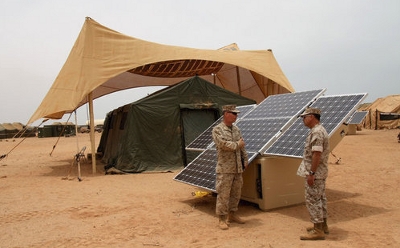 Funny, that’s been our approach all along…

Sometimes I just need a little reassurance when things get as crazy as they are. I’m sure you do, too.

This week’s ideas on how to play the ongoing transition below.