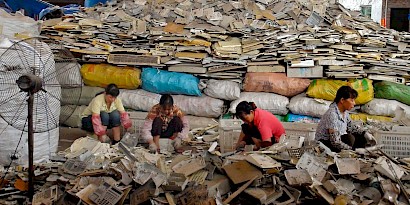 This year, each of us will throw out, recycle, or shove into a desk drawer an average of 16.8 pounds of old phones, laptops, toasters, and other electronics and appliances, according to the UN — a whopping total of 63.3 million tons of electronic waste worldwide.

That waste can end up in massive digital dumps in the Global South, exposing children who pick out valuable metals from the trash to more than 1,000 toxic substances.

With just more than 17% of that e-waste recycled, advocates are urging producers and consumers to make sure those defunct electronics don’t end up in landfills or collecting dust in the basement. As we transition to more renewable forms of electricity and transportation, which require metals like lithium and copper, experts say it’s more important than ever that we recycle smartphones and batteries.

“It’s a call on consumers to return their electronics because without that, the alternative is the need to mine the materials, which is a lot more environmentally damaging,” said Pascal Leroy, director general of the nonprofit WEEE Forum, during a press conference held Wednesday to promote International E-waste Day.

Electronic waste, or “e-waste,” is not a new challenge — picture discarded rusted washing machines and refrigerators.

But the amount of e-waste we’re creating each year has been on the rise. In 2019, 59 million tons of e-waste were created around the world, up more than 20% in just five years, according to the United Nations.

Some countries — especially in Europe — have relatively successful e-waste takeback programs. But “the amount of e-waste is growing so rapidly that even the growth (of recycling) that we are experiencing at a global scale is being outpaced,” said Kees Baldé, a senior program officer at the United Nations University’s Sustainable Cycles Program, during the press conference.

The Environmental Protection Agency estimates that Americans throw out more than 151 million cellphones a year. The agency says that recycling a million of those phones would recover 35,000 pounds of copper and 772 pounds of silver. Large appliances like fridges and stoves still make up the bulk of e-waste by weight, according to the WEEE Forum.

Improper e-waste disposal brings with it a host of environmental and human health concerns.

Because of their small hands, kids often work to recover valuable materials from digital dumpsites in Asia and Africa, exposing them to heavy metals like lead and mercury and other toxic chemicals, according to the WHO. Meanwhile, pregnant people who sift through e-waste at these sites are at greater risk of having a stillbirth or premature birth, and of having babies born with neurodevelopmental issues linked to lead exposure.

The U.S. has not signed the Basel Convention, which prohibits countries from sending hazardous waste abroad unless recipients have agreed to accept it.

Policies to deal with e-waste

Like with many environmental issues, Europe is ahead of the United States in addressing e-waste. The EU requires electronic product manufacturers to design products so that they can be repaired, and to put in place electronics takeback and recycling programs. EU citizens also have guaranteed access to free e-waste recycling programs — something not guaranteed in the U.S. These efforts have led to 55% of e-waste in Europe being properly recycled, Leroy said at the press conference.

While it’s been illegal to dump e-waste in the United States since the 1970s, states have largely been left on their own to figure out what to do about mounting electronic waste. 25 states and the District of Columbia have put e-waste laws in place, but experts say a more comprehensive approach is needed.

Recently, the “right to repair” movement has gained momentum to ensure that customers have access to the software and other tools needed to repair their own cars and electronics, or to seek out independent, and typically cheaper, mechanics and repair shops to do so for them. Elizabeth O’Reilly, head of environmental compliance at WEEE Ireland, said a focus of e-waste reduction efforts where she lives has been training a new generation of appliance repair technicians.