Eelgrass is the climate-fighting hero the ocean needs

Today is World Ocean Day, and Rep. Raúl Grijalva has introduced the Ocean-Based Climate Solutions Act. This is a comprehensive bill that addresses the litany of threats that climate change poses to people and birds on our coasts, and it includes measures to restore and protect coastal ecosystems that store carbon pollution like eelgrass.

Eelgrass is a flowering saltwater plant in the seagrass family that grows underwater in dense, swaying meadows. It’s found in bays, estuaries, and beaches on the West Coast from Alaska through California, and on the East Coast from Newfoundland through the Carolinas.

Eelgrass meadows provide essential habitat for coastal birds, like Brant, wigeon, and teal which feed directly on the plant. They also serve as a nursery for important forage fish like Pacific herring to lay their eggs, which sets off a feeding frenzy with dozens of seabird species gathering to feast, like scaups, scoters, pelicans, cormorants, and grebes. During low tides, eelgrass beds on tidal flats hold moisture like a sponge, offering a safe, wet habitat for small creatures. Eelgrass also attracts crabs, salmon, and marine mammals, making it an important place for the fisheries and tourism industries.

Healthy eelgrass beds clean and filter water while acting as natural buffers to protect the coastline during storms. Now, science is showing that eelgrass absorbs the carbon pollution that drives climate change. 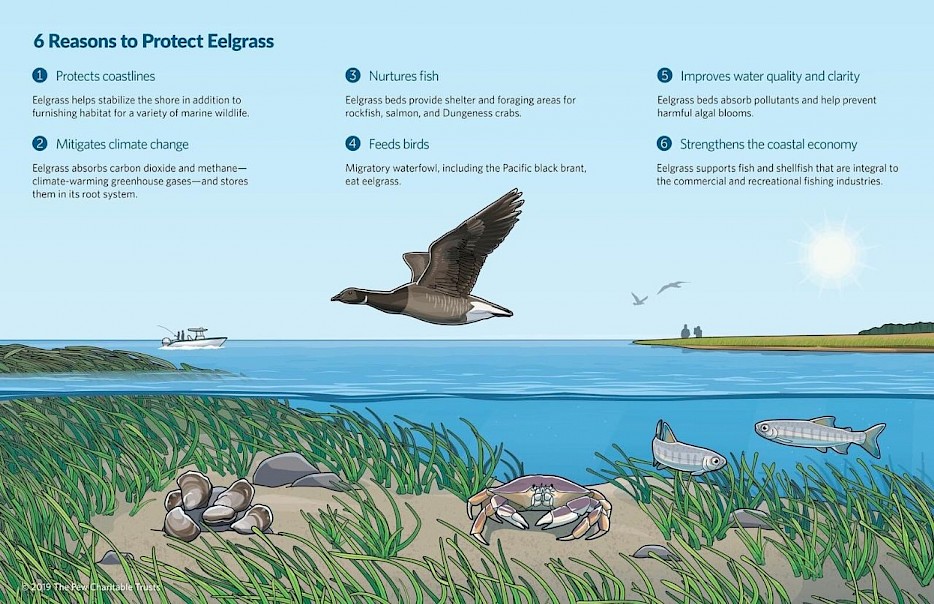 Dr. Aurora Ricart of University of California-Davis is the lead author on a groundbreaking new study showing that eelgrass provides a refuge for sea life from ocean acidification. She describes ocean acidification as “the evil twin of climate change”—excess carbon dioxide makes the ocean more acidic, which harms marine animals by making it more difficult to build their shells and skeletons. This means fewer crustaceans, shellfish, and tiny animals called zooplankton for birds and other wildlife to eat.

“Scientists like me have been studying the capacity of seagrass meadows to mitigate climate change effects through carbon sequestration with very optimistic results,” says Dr. Ricart. “Seagrasses, among the many other ecosystem services they provide, can serve as natural tools to increase adaptive capacity of coastal areas regarding climate change. Their conservation should be a priority.”

The ocean takes in about a quarter of the carbon we pump into the atmosphere, roughly the same as the absorption by land. However, coastal habitats including eelgrass, mangroves, and tidal marsh remove carbon from the atmosphere at approximately three times the rate of land-based habitats like forests. Known as “blue carbon,” these habitats store carbon in their sediments for thousands of years. Conversely, if these blue carbon habitats are destroyed, they release their carbon back into the atmosphere.

Unfortunately, seagrasses are disappearing worldwide because of pollution, dredging, development, sea-level rise, and other human-caused impacts. Approximately 30 percent of the world’s seagrass has vanished since the 1870s. Globally, we’re now losing two football fields’ worth of eelgrass every hour.

Yet eelgrass can be protected and restored. In Puget Sound, eelgrass has stabilized thanks in large part to efforts to restore and protect eelgrass beds. In Chesapeake Bay, a decades-long project has restored nearly 9,000 acres of eelgrass, bringing back a once-lost food web to a wintering habitat for Atlantic Brant. And Audubon California is working with partners to restore eelgrass habitat to Richardson Bay, the second largest existing eelgrass bed in the San Francisco Estuary.

As Audubon has found in our recent Natural Climate Solutions Report, some of the best landscapes for storing carbon naturally are also important to birds’ survival. Maintaining and restoring these climate strongholds are key to reducing emissions and protecting the birds we love.