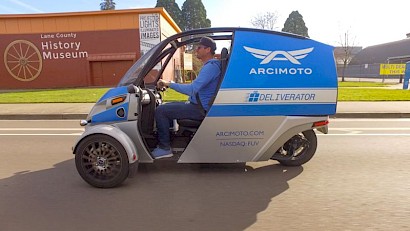 In June, the electric bike startup Joco, which rents e-bikes to food delivery workers and other couriers in New York City and Chicago, began testing a new vehicle called the Deliverator. Made in Eugene, Oregon by Arcimoto Inc., the Deliverator is an electric three-wheeler with a “reverse-tricycle” configuration—two wheels in the front and one in the back—that makes it look like a giant lobster.

It has a 20 cubic-foot enclosed storage compartment behind the driver, a top speed of 75 miles per hour, a range of about 100 miles and costs $25,000. Joco is testing four as part of a pilot program with Arcimoto and has begun giving demos to ghost kitchens, grocery chains and other potential customers in need of delivery fleets.

I met with Cohen in the parking lot of a self-storage center on the far West Side of Manhattan on a weekday at the end of June so that I could take one of the Deliverators for a spin. After a brief tutorial, I pulled into the midday traffic on Eleventh Avenue. (Thanks to a recent change in New York state law, I didn’t need a motorcycle license to operate it on city streets, no helmet required.) The motorcycle-style handlebars felt strange at first, but after a few blocks I started to get the hang of it. When a car in front of me stopped to double park, I squeezed around it on the left and, on one open stretch, throttled up to 30 miles-per-hour. It was, far and away, more enjoyable than covering the same blocks in a van.

The fun-factor, though, is not the point. The Deliverator is a modified version of the Arcimoto’s flagship product, the FUV, or Fun Utility Vehicle. The Deliverator’s storage compartment takes the place of the FUV’s single passenger seat. While the original aims at retail customers willing to plunk down $17,900 to enjoy the breeze and turn heads as they drive, the Deliverator is for fleet customers looking to lower operating costs and maximize deliveries per hour. Founded in 2007, Arcimoto spent more than a decade developing the retail FUV, which shipped to its first customers in 2019. Work on the Deliverator began that same year.

In addition to Joco, Arcimoto has small pilot programs for the Deliverator in Los Angeles; Key West, Florida; and Eugene, Oregon. The goal is for electric three-wheelers to gain a foothold in the US as urban delivery vehicles, a role they already play in cities across China, India, and Southeast Asia. “What we’re aiming to do is radically widen the market opportunity for three-wheeled vehicles,” said Arcimoto co-founder and CEO Mark Frohnmayer.

Of the 117 million three-wheelers on the road globally last year, according to BloombergNEF’s Electric Vehicle Outlook, more than 90% were in China and India. China alone has a fleet of roughly 100 million, primarily used for hauling passengers and cargo on short trips. Nearly 70% of the global fleet is electric, mostly using lead-acid batteries, though a swift transition to lithium-ion is underway. BNEF expects global sales of electric three-wheelers to pass 12 million units this year, with fewer than 10,000 outside of China and India. 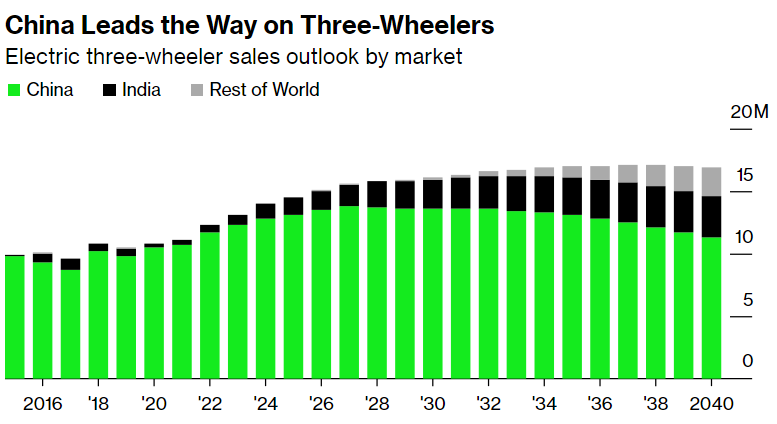 In the US, the three-wheeler remains a niche product, with combustion engine models such as the Polaris Slingshot sold to retail buyers as flashy weekend rides. Arcimoto is attempting to use that recreational appeal to get US drivers to opt for light electric vehicles for some of the many, many short trips they take alone in cars. “We compete very well on the joy factor with all kinds of toys in the market,” said Frohnmayer, “but the utility thesis very quickly shines through for our customer base.”

For the moment, that base is small. The company built about 300 vehicles last year, including the two-seater retail FUV, the Deliverator, and other variations built for first responders, landscapers and movie sets. It’s targeting 1,000 this year. ElectraMeccanica, a rival electric three-wheeler maker founded in 2015, has so far produced more than 400 of its flagship vehicle, the SOLO, which seats only the driver, and sells for $18,500.

Vehicles like the FUV and SOLO occupy an in-between space in the personal transportation market—more than a bicycle, but less than a car. “It’s been a hard sell in the US to convince people to buy expensive, small electric vehicles,” said Reilly Brennan, a founding partner at the San Francisco venture capital fund Trucks, which specializes in transportation. Most people, he said, would sooner buy a used Toyota Corolla. 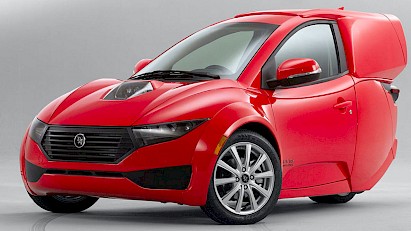 For fleet customers, three-wheelers can be a happy medium. They are smaller, nimbler, and cheaper to operate than vans and trucks, while moving faster than most cargo bikes and without pedaling by the driver. As cities increasingly restrict access for cars and trucks in central districts, said Brennan, three-wheelers provide future-proofing: “In certain corridors around the world, small, lightweight electric vehicles will likely be the only way you can do delivery without paying a penalty.”

ElectraMeccanica is also testing the waters for delivery and other commercial uses, with a cargo version of the SOLO with 12 cubic feet of storage space and price tag of $24,500 set to begin shipping soon. In February, the company announced that it had delivered 20 SOLOs to customers including sandwich shops, diners, and a frozen yogurt stand. While these pilot programs are as much about publicity as they are logistics, they suggest that the US market for three-wheelers is moving in a new direction. Delivery buyers, said Brennan, are likely to outnumber retail customers over the next ten years.

Joco’s Cohen said if all goes well, he aims to place an order for a couple dozen units when the pilot ends later this summer. Joco’s main business is renting bikes to delivery workers, who pick them up and drop them off at private parking lots scattered throughout New York, but the Deliverator will not be available to them.  It’s offering the three-wheelers only to fleet customers who contract with Joco for access to multiple vehicles.

“We think the next trillion-dollar opportunity in the transportation space is going to be in light electric vehicles—e-bikes, cargo bikes, this beautiful Deliverator,” he said, “You don’t need a two-ton vehicle to do to do the deliveries that we do.”