Debunking the biggest myths about our ocean plastic problem 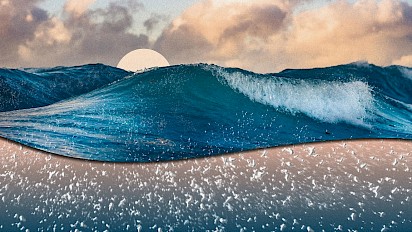 When you think of plastic pollution in the ocean, you might picture bottles and bags floating on the surface of the sea, a “seventh continent” made up entirely of plastic waste, or all of that pollution flowing into the ocean from just a few intensely polluted rivers. And so the solution, it would seem, is to clean up that floating trash and prevent plastic from those rivers. But in reality it’s not that simple, because those images of the ocean’s plastic pollution aren’t quite accurate.

A new report from Plastic Odyssey, a France-based project to reduce plastic pollution, busts common myths about the ocean’s plastic problem. Take that iconic image in your mind of plastic floating on top of the waves. One myth is that the ocean can be cleaned up by collecting that floating trash; but that would make just a small dent. In reality, less than 1% of ocean plastic floats on the surface.

That doesn’t mean there isn’t plastic floating on the sea that needs to be cleaned up. According to a 2019 study, there are 1.13 million tons of plastic floating on the ocean’s surface. But that represents less than 0.6% of total plastic pollution—a small fraction of the 198 million tons of plastic that have been dumped into the ocean since the 1950s. Where’s the rest? Scientists aren’t sure, but it could have been pushed back to the coasts, sunk to the bottom, or dissolved into microparticles.

Another myth has to do with where all that plastic originates from. If you watched Seaspiracy, for example, you might think the fishing industry is the main culprit. But most plastic that ends up in the ocean comes from trash originating on land, specifically the coasts. Marine sources of plastic pollution (of which fishing is just one) contribute 1.75 million tons of plastic per year, a small amount compared to the 9 million tons of land-based coastal pollution that enters the ocean annually.

The myth-busting in the Plastic Odyssey report isn’t a result of any new studies, but a closer examination of the research that already exists. Simon Bernard, Plastic Odyssey CEO and a former merchant navy officer, says he spent four years getting to the source of those misconceptions and trying to better understand ocean pollution. Some of the misconceptions happened because scientific studies had been misreported, like the stat that 90% of marine plastic pollution comes from just 10 rivers. The study actually found that 10 especially polluted rivers are responsible for 90% of all the plastic that enters the ocean from rivers. Those 10 rivers contribute just 1% of the total ocean plastic pollution.

Other myths come from prevailing images of plastic pollution, like the pictures of trash floating on the surface of the sea, which is where the idea of a “seventh continent” of floating plastic waste comes from. Most of that plastic is actually “a soup of plastic microparticles—many of which are invisible to the human eye,” Bernard says.

Though microplastics make up 94% of the estimated 1.8 trillion pieces of floating plastic in the Great Pacific Garbage Patch, they account for just 8% of the total mass: Most of the volume of the garbage patch is made up of tiny particles that you can’t see and are hard to clean up from the surface. “If you try to collect microplastic, you will obviously collect life, because the ocean is not [all] water,” Bernard says. “We would say first it’s life, with a bit of water. It’s not water with a bit of life… . Once the microplastics are at sea, it’s almost impossible to take them back without harming the environment.

“It’s really important to explain what we know today on this pollution and where we should all act,” Bernard continues. “There is no magical wand [to] just collect pollution and everything is going to be okay.” He says people have questioned why Plastic Odyssey doesn’t focus on stopping fishing, or closing those 10 rivers that spill plastic into the oceans—but those are simplified solutions, the report argues, that don’t tackle the full, complex problem.

Plastic Odyssey is working on a solution, though, with a three-year-long boat expedition expected to launch in November. Plastic Odyssey will become a floating lab and recycling center, traveling 40,000 nautical miles and to 30 countries in the global South to help locals develop waste management solutions and learn about plastic alternatives.

The boat, once an oceanographic research vessel, is currently being turned into “a full-scale demonstrator of all solutions to any plastic pollution,” Bernard says. It won’t collect the plastic already at sea (though on board it will have a system to turn plastic into fuel, and one goal is to stop at Henderson Island, a deserted island in the South Pacific that is full of trash, and collect plastic from there to power the vessel). Instead, the team will work to prevent plastic from entering the ocean from these spots on land, helping people find solutions for the plastic waste they do have and can’t recycle. Plastic Odyssey’s partners include Greentech Innovation and the Global Partnership on Marine Litter, among other institutions, as well as businesses like L’Occitane and French bank Crédit Agricole.

Plastic Odyssey’s goal, Bernard says, is to “clean up the past and build the future… . We don’t want to keep on going with this business as usual. We want to showcase and promote solutions that can end the consumption of plastic, or at least reduce it.”