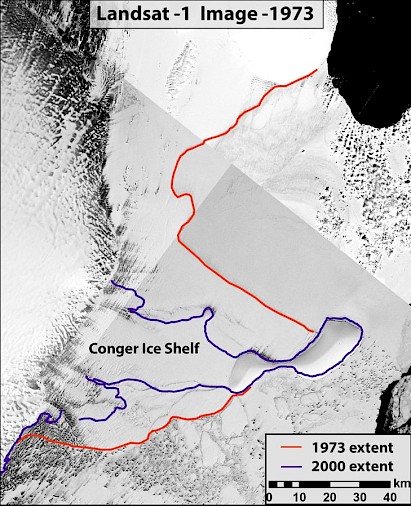 An ice shelf larger than New York City has broken off eastern Antarctica, the first major shelf to collapse there in more than four decades of satellite observations.

The Conger Ice Shelf, spanning about 460 square miles, shattered off the continent on March 15. Its disintegration has alarmed scientists, who have long considered ice in eastern Antarctica as relatively stable and far less vulnerable to global warming compared to ice in western Antarctica.

Ice shelves surrounding Antarctica protect ice sheets and glaciers on the continent. If the shelves give way, it creates a path for ice streams from surrounding glaciers to spill into the ocean and contribute to sea level rise. The ice shelves themselves do not directly lift the sea level because they’re already floating on the ocean.

In just the last month, sea ice levels surrounding the continent dropped to a record low and temperatures on the interior of the eastern Antarctica shot up 70 degrees above normal, smashing records.

“We’re seeing these things sooner than we expected,” said Peter Neff, assistant research professor at the University of Minnesota and an expert in glaciology.

Ice loss from Antarctica has accelerated in recent years — much of which comes from western Antarctica — and ranks as a significant driver of global sea level rise. What happens in eastern Antarctica is particularly important because if all of its ice were to melt, it would raise sea levels by well over 100 feet.

The collapse of the Conger Ice Shelf occurred at the beginning of the record-breaking warm spell in eastern Antarctica. On March 18, temperatures rose 50 to 90 degrees above normal over parts of the East Antarctic Ice Sheet and rain, a rare occurrence on the continent, fell near the coast.

Temperatures near where the ice shelf broke off began rising above the melting point right around the time it separated from the continent. A weather station in Casey, Antarctica, about 300 kilometers from the Conger Ice Shelf had maximum temperatures above freezing from March 15-18.

Neff said the pulse of warmth, transported over the continent by an usually intense plume of moisture known as an atmospheric river, probably played a relatively small role in the ice shelf’s collapse. But it may have contributed to its disintegration, he added.

He described the ice shelf’s demise as a wake-up call for scientists studying the region.

“We expect the ice shelves on the west to be doing this but not the eastern ones,” he said in a phone interview. “That’s what got folks’ attention. We really need to be more comprehensively tracking all of these processes in east Antarctica. Small mistakes in eastern Antarctica can lead to big oversights.”

Neff said that despite the Conger Ice Shelf’s surprising collapse, his primary concern about Antarctica and its potential to contribute to dangerous amounts of sea level rise lies in the west.

West Antarctica “is what will first cause big problems for everyone with sea level rise,” he said.

In December, scientists concluded that an ice shelf on the periphery of the Thwaites Glacier in western Antarctica could break off in the next five years, accelerating the flow of melt water and fueling sea level rise.

Neff said the contribution to sea level rise from the Conger Ice Shelf giving way is just a “drop in the bucket,” relatively speaking. Compared to western Antarctica, eastern Antarctica is colder, higher, drier and less vulnerable to rising temperatures.

Even so, Helen Fricker, a professor at the Scripps Institution of Oceanography, said in an email that ice shelves like Conger “play an important buttressing role on the grounded ice sheet behind, which has implications for sea level rise.”

“This event shows that it is important to keep monitoring around the edges of Antarctica, where there are significant changes taking place,” she wrote.

In a TikTok video posted to Twitter, Neff came to the following conclusion: “This is going to continue happening in a warming world, so the best thing we can do is get rid of our fossil fuels, stop emitting greenhouse gases and limit the amount of warming we experience.”