Colorado River reservoirs are so low, government is delaying releases 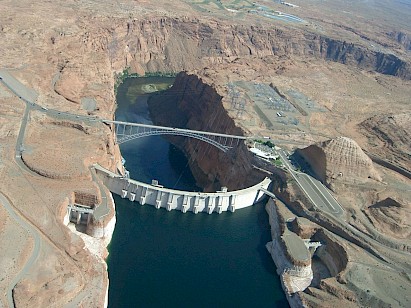 With long-term severe drought continuing to take a toll on the Colorado River, the federal government is expected to announce on Monday that it will retain some water in one of the river’s major reservoirs to temporarily stave off what it called increased uncertainty in water and electricity supplies.

The anticipated decision to keep more water in Lake Powell on the Arizona-Utah border, rather than releasing it downstream to the other major reservoir, Lake Mead near Las Vegas, comes as both are at record-low levels after 20 years of drought. Powell, behind Glen Canyon Dam, currently holds less than one-fourth of the amount it held when it filled after the dam was built in the 1960s.

In a letter last month to officials of the seven states that receive water from the river, an assistant Interior Department secretary, Tanya Trujillo, said there were concerns that Powell could decline further over the next 24 months to a “critically-low” level at which the dam could no longer generate hydropower. That would create a number of problems for the water and electricity supply and for the dam itself, she wrote.

In a joint letter two weeks later, the state officials agreed to the proposal to keep more water in the lake “to reduce the risks we all face.”

The decision would keep nearly half a million acre-feet of water in Lake Powell. That is about 8 percent of the lake’s current volume, and is equivalent to the annual amount used by a million or more households. Under a separate plan agreed to last month, the bureau will also release a half million additional acre-feet into Powell from an upstream reservoir, Flaming Gorge, at the Utah-Wyoming border.

Without the additional water, the bureau had estimated there was about a one in four chance that by 2024 the lake level would fall below 3,490 feet above sea level, at which point power could no longer be produced.

Conservationists and water policy experts said the expected decision was only a short-term fix, and that work must be done quickly on ways to make the river, which supplies water to 40 million people, as well as for agricultural and industrial use, sustainable over the long term.

Bart Miller, a program director with Western Resource Advocates, an environmental advocacy group, said his organization supported the bureau’s decision. “But it’s not enough to fix the problem,” he said. “Throughout the Colorado River basin we are using more water than the river provides.”

Haley Paul, policy director at Audubon Arizona, said that the region needed to figure out how to share a river made smaller by climate change. “I don’t think we’re there and we urgently need to get there,” she said.

Lake Mead is currently at 31 percent of capacity, and because it gets almost all its water from releases from Powell, the pending decision will cause it to fall even lower.

The status of Lake Mead led the Bureau of Reclamation, the Interior agency responsible for the supply of water and electricity from the Colorado, to declare a first-ever water shortage there last August. That triggered cuts in the supply from the lake, mostly to Arizona.