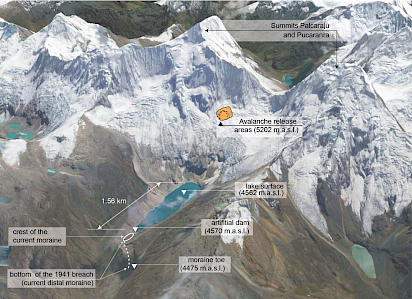 Lawyers working on a groundbreaking climate lawsuit said it had entered a decisive phase after judges from Germany visited a glacial lake in the Peruvian Andes to assess flood risk, which the case links to emissions from European electricity giant RWE.

In what experts consider a first among a rising number of cases over climate damage, lawyers said the judges’ visit, which included court-appointed scientists, means an oral hearing could happen as early as this year and a verdict within two years.

Last week’s fact-finding trip to Lake Palcacocha, more than 4,500 metres (14,764 ft) above sea level, was tasked with deciding if the threat of flooding to local residents from the glacial lake is high enough to back a legal claim against RWE, one of Europe’s biggest emitters of greenhouse gases.

In 2017, judges in Hamm, Germany, made legal history by accepting the case mounted in 2015 by Saúl Luciano Lliuya, a local farmer and mountain guide, who asked RWE to pay 17,000 euros ($18,239) to protect locals in case of an outburst flood from the lake and to help prevent it happening.

Lliuya’s two-storey house in the Nueva Florída neighbourhood of Huaraz city stands on the projected flood path, along with the homes of about 50,000 residents, on sloping streets parallel to a fast-flowing river that tumbles down from distant ice caps.

Lliuya contends that RWE has contributed nearly 0.5% of global manmade greenhouse gas emissions since the industrial revolution, according to the Carbon Majors Database - and should pay the equivalent fraction of the roughly $3.5 million costs for flood protection in the area.

“Due to the work that I do as a mountain guide and as a farmer, I have seen it with my own eyes,” Lliuya told the Thomson Reuters Foundation on the roof of his home overlooking the city.

“This is the strongest reason why I have sued the company - because it has to take responsibility for the environmental damage it has caused.”

Famed for its snow-capped peaks, the Cordillera Blanca mountain range has the largest swathe of tropical glaciers in the world. But global warming has caused accelerated glacial melt across the Andes, from Colombia to Bolivia.

Sitting below the Palcaraju glacier in northwest Peru, Lake Palcacocha’s volume has swollen by 34 times to 17 million cubic metres in the last five decades.

Manmade greenhouse gases have accelerated glacial melt, creating a substantial risk of an outburst flood triggering a landslide that would slam into Huaraz, according to a 2021 peer-reviewed study published in Nature Geoscience.

Local authorities have used government-assigned funding to establish an early warning system at the lake, which would set off sirens downstream if it breaches its banks.

Residents would have between 20 and 40 minutes to evacuate their homes before floodwaters hit.

ONE OF THE FIRST

Lliuya’s lawyer, Roda Verheyen - who also travelled to Peru to visit the lake and the at-risk town – said that when her firm took the legal case in 2015, it was one of the only climate lawsuits in the world.

“(That) is now no longer the case, but it remains the only one that actually looks at the emitters and private actors - and … at adaptation costs,” Verheyen, founder of law firm Green Legal Impact, told the Thomson Reuters Foundation.

It is also the first climate case in which a court has travelled to another country where the alleged damage took place to gather evidence, Verheyen added.

RWE spokesperson Guido Steffen rejected the charge that the company should be responsible for Lliuya’s adaptation costs.

“Individual emitters are not liable for universally rooted and globally effective processes like climate change,” he told the Thomson Reuters Foundation in emailed comments.

“Innumerable sources around the globe have emitted greenhouse gases or contributed in other ways to climate change,” he said, describing those sources as both natural and manmade.

Climate is an “extremely complex matter”, he noted, adding that in RWE’s opinion, “it judicially is impossible to relate specific/individual consequences of climate change to a single (source)”.

RWE has cut its power plant emissions more than 60% from 2012 levels by reducing coal power generation, it says, but it continues to mine and burn brown coal.

Lliuya said he and his neighbours are feeling the effects of climate change beyond only the flood risk to their homes.

For many indigenous farmers, the unseasonal melting of the glaciers has thrown their livelihoods into jeopardy, as it has also brought greater risks of prolonged drought, he said.

“It’s not just about me. The (people) look at the white peaks and they are worried about their crops,” he said.

“There are years when it doesn’t rain, so we need to irrigate with the water which comes from the glaciers - and when it gets scarce, there are conflicts,” he added.

Martin Mergili, a geomorphology expert at Austria’s Graz University on his first visit to the Peru site, said Palcacocha is one of a growing number of Andean lakes at risk of an outburst flood caused by ice and rock chunks falling from glaciers.

Besides glacial retreat, the permafrost in the rock is melting and flowing, weakening the “glue” holding it together, he noted.

“Due to anthropogenic climate change, it is really more likely that something falls down into the lake. Under the glacier, it is more unstable, and the probability of a landslide or avalanche is more likely,” he added, gazing at the Palcaraju glacier, a sheer wall of ice and snow looming behind the lake, except for the lower part where the underlying rock face is exposed.

In 1941, a chunk of ice broke off in an earthquake and fell into the lake, causing an outburst flood that sent a cascade of mud and rock down into Huaraz, destroying a third of the city and killing about 1,800 people.

The 2021 study published in Nature Geoscience said the glacial retreat at that time “represented an early impact of anthropogenic greenhouse gas emissions” and was in line with a 1 degree Celsius temperature rise in the region since 1880.

Since then, the lake has grown hugely, and 11 black rubber tubes siphon off water to keep its level down.

Modelling by the University of Texas shows how a falling glacier chunk could displace up to 15 million cubic metres of water from the 70-metre deep, mile-long (1.7-km) lake, sending a wave of up to 30 metres over a rock ridge and down the mountain.

Noah Walker-Crawford, an external consultant on climate litigation to Germanwatch, an advocacy group backing the legal case, said the judges had visited the area mostly to verify the extensive studies already done on the glacier and the lake below.

Authorities in Huaraz also understand that the case is about far more than this specific example of flood risk, he said.

“It’s about setting a precedent for holding major emitters responsible - and for supporting vulnerable people impacted by climate change here in Peru and in other countries,” he added.

Carroll Muffett, president and CEO of the nonprofit Centre for International Environmental Law, said the case was at the vanguard of cross-border climate litigation against corporate emitters, which is likely to increase.

“As climate impacts grow more severe (and) more pervasive, there are potential plaintiffs like Saúl Luciano Lliuya in virtually every country on the planet,” he added.