The world’s oceans absorbed 20 sextillion joules of heat due to climate change in 2020 and warmed to record levels, a study has found.

Report co-author Kevin Trenberth, from the US National Center for Atmospheric Research, said oceans absorbed more than 90 per cent of the solar energy trapped by greenhouse gases.

“There’s a tremendous amount of energy that’s actually involved in this — it’s not surprising that it has consequences,” he said.

“Since about the mid-1990s, at least, the oceans have been warming very steadily.

“In fact, they are the best single indicator that the planet is warming.” 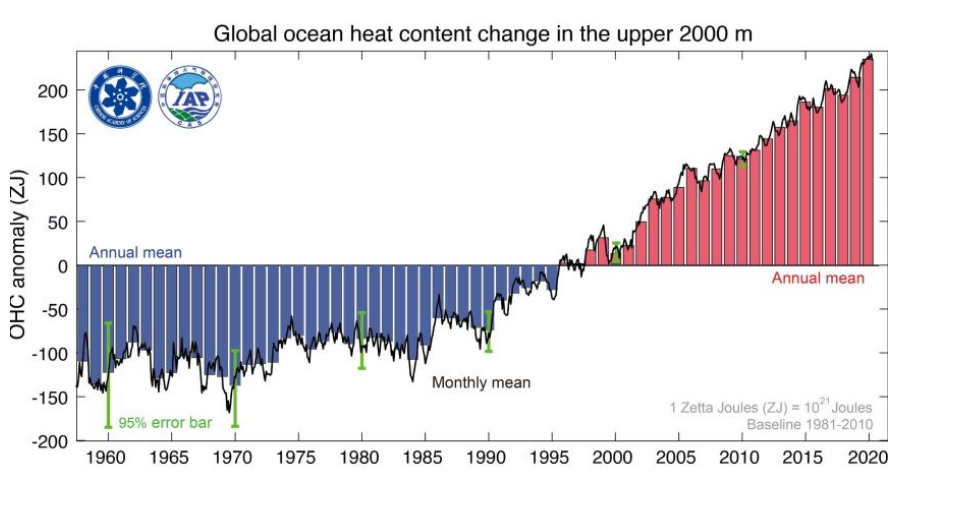 The study came as scientists confirmed that global air temperatures in 2020 were equal to 2016 — the hottest on record — and as Australia experienced its fourth hottest year on record.

“The ocean is a key controller of the climate that we see on the continent of Australia,” CSIRO oceanographer Bernadette Sloyan said.

She said warmer oceans could lead to increases in extreme weather.

“That heat is actually providing the fuel that can bring in monsoons, rains and tropical cyclones,” Dr Sloyan said.

“That’s because the oceans have the heat and will slowly release it back to the atmosphere and impact weather and severe weather events.”

“Once we exceed those temperature ranges – and if we exceed them for long periods of times – we have significant coral bleaching.”

Australia’s south-east has been identified as an ocean surface warming hotspot, according to Jessica Benthuysen, an oceanographer with the Australian Institute of Marine Science.

“We’ve had a number of dramatic marine heat waves in the Tasman Sea over the past five years, including in 2016,” she said.

“That was the longest, most intense marine heat wave on record — and that was associated with a shift in fish species and Pacific Oyster Mortality Syndrome for the first time.”

In its State of the Climate 2020 report, the Bureau of Meteorology said the average sea surface temperature in the Australian region had warmed by more than one degree Celsius since 1900.

Eight of the 10 warmest years on record have occurred since 2010.