Clean energy at a crossroads: the Made-in-America push 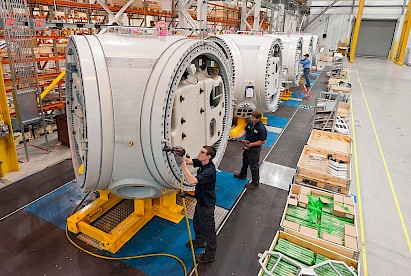 This year, Schweitzer Engineering Laboratories expects to complete an $80 million-plus Idaho factory to produce the “brains” of its line of digital controls and instruments for the U.S. power grid, bringing a critical part of the supply chain under its own roof.

“It’s high time to be making things in America,” said Edmund Schweitzer III, founder, president and chief technology officer of SEL, a 5,000-employee company based in Pullman, Wash., a few miles west of the Idaho site.

Call it music to the ears of President Joe Biden and many congressional Democrats, who are counting on U.S. companies and workers to produce the infrastructure of a transformed clean energy grid.

The massive clean energy transition that Biden and Democrats are seeking could require total investments of nearly $10 trillion by 2050, according to Princeton University analysts. How much of that infrastructure is built in America or bought elsewhere could have huge consequences for the U.S. economy and global trade relationships.

It also could influence the path of renewables and other energy industries dependent on materials in the global supply chain that are currently under pressure, observers say.

Since the Biden administration came into office in January 2021, the economy has added 473,000 net manufacturing jobs, according to the Labor Department. There were strong gains in technology-heavy sectors and continuing announcements of new factories, as companies respond to supply chain shortages and trade policy restrictions.

But the uptrend in production has not stilled the old, partisan and philosophical debate about how much government should try to steer the economy toward policy goals or leave outcomes to the “invisible hand” of markets and consumer choices.

Republican Ways and Means ranking member Kevin Brady (R-Texas), for instance, said in a November statement that Biden’s “Made-in-America” taxes would make it harder for companies to invest in workers.

Regardless of the political debate, a February report by the Institute for Supply Management, based on its long-running industry survey, showed manufacturers’ new orders up 3.8 percentage points in February over January’s total, the 21st straight month of growth.

Industrial production in selected high technology industries has risen by 45 percent since 2017, compared with 4.6 percent for all sectors, the Federal Reserve reported last month.

The promise of a continuing uptrend comes from a string of announcements of new manufacturing plants in the U.S., with clean energy projects high on the list. Navistar International Corp. opened a $250 million assembly line for electric and conventional trucks in San Antonio in March that the company calls the first new U.S. truck plant in three decades.

Also in March, Lion Electric Co. welcomed visitors to the site of its Joliet, Ill., manufacturing plant that will be turning out electric school buses and other heavy-duty vehicles, with its eye on the $5 billion funding for zero- and low-emission buses included in the 2021 Infrastructure Investment and Jobs Act.

Heading the project list are announced plans for multibillion-dollar U.S.-based computer chip fabricating plants by Taiwan Semiconductor Manufacturing Co.; South Korea’s Samsung Electronics Co.; and Intel Corp., the eclipsed U.S. chip manufacturer that has recommitted to getting back into production of the digital economy’s core components .

“Our customers want us in the U.S. The U.S. government wants us here,” Rick Cassidy, chief executive of TSMC Arizona, told CNBC recently, discussing the company’s major chip-making expansion in that state.

In an interview with E&E News, SEL’s Schweitzer said the decision by his company — and others — to expand domestic manufacturing stems from the costly, frustrating disruptions in global supply chains triggered by the Covid-19 pandemic. Chip shortages have thrown off production of a catalog of products, including motor vehicles and digital phones.

Schweitzer follows in the footsteps of his grandfather, who built high-voltage fuses for one of Thomas Edison’s original utility companies more than a century ago. SEL’s products today are on the frontiers of digital technologies required by an evolving grid. Controlling quality and performance has never been more important, he said.

“We’re using more and more circuit boards. We design them all,” he said.

To this point, SEL has been able to use U.S. suppliers, but Schweitzer added, “We’ve had a lot of pressure to have our [circuit] boards made offshore. We don’t want to do it. … We want to keep our work under [our] control. These devices are used in critical infrastructure, and we want to keep our arms around our own designs.

“This is something that many businesses are facing,” he added.

The announcements of new technology production plants signal the possibility of a new chapter for U.S. manufacturing, said Deborah Wince-Smith, president of the U.S. Council on Competitiveness, an organization of business executives, university presidents, labor leaders and research directors.

“It’s not just a resurgence but a leapfrogging of advanced manufacturing investment,” Wince-Smith said. “What has really happened — and the Biden administration has moved forward on this — is the recognition that many products that were essential to public health, safety and security were not made in the U.S.” and need to be, she said.

Biden’s actions to strengthen Buy American provisions in federal procurement, and strategic investments in critical future technologies, contribute to a stronger climate for U.S. manufacturing, she added. BIden has pushed the issue in several ways, including through an executive order last year instructing the federal government to give preference to domestic manufacturers when procuring goods and services (Energywire, March 1, 2021).

Conservative economists have long challenged the argument by traditional Democratic political leaders and their labor union allies that U.S. manufacturing should have a privileged place in the U.S. economic priorities.

During the 2016 election, Harvard University economics professor Greg Mankiw stated the argument succinctly in a column in The New York Times. The economy’s productivity gains when fewer workers are able to increase output.

“This change is hard on displaced workers, but it is good for the economy over all. Rising living standards are possible only if productivity increases,” wrote Mankiw, who headed former President George W. Bush’s Council of Economic Advisers.

Liberal economists say, however, that the U.S. cannot let itself become deeply dependent on foreign-made manufactured goods of high economic and strategic value, particularly when the source is China, the country’s top global economic rival.

Some on this side say much stronger federal policies are required to put the U.S. back at the top in manufacturing the infrastructure for a clean energy economy.

“Yeah, we’re making a little bit of progress. We get a huge plant opening and everybody’s celebrating, but we’re way, way behind,” said Robert Atkinson, president of the Information Technology and Innovation Foundation, a science policy think tank. The U.S. must invest hundreds of billions of dollars in advanced manufacturing “to ever come close to Japan and China,” Atkinson added.

The country’s dominant economic philosophy and public viewpoints leave U.S. companies far back on the track, he added. American consumers don’t think first about buying American, he said, but “we’re competing with countries that do think that way.”

Japan and Germany willingly include economic strategy in economic policy decisionmaking, experts have long noted. Atkinson cites Germany’s Fraunhofer Society as an example. An applied research organization with a $3 billion budget from government and private-sector support, its 76 institutions and laboratories are dedicated to helping German manufacturers — particularly small and medium-sized firms — maintain leadership in high-priority industrial manufacturing. That is not the case in the U.S., according to Atkinson.

The push to erect offshore wind farms along the Atlantic Coast illustrates the challenge for manufacturing in the energy sector, according to a recent report by DOE’s National Renewable Energy Laboratory.

The 30,000 megawatts of planned wind energy capacity along the Eastern Seaboard will require 2,100 wind turbines and platforms, 6,800 miles of electric cable, and a fleet of special-purpose vessels, NREL reported in March.

Most components will have to be sourced from European suppliers in the 2020s, until domestic manufacturing facilities can be built, NREL concluded. Plans have been announced for 11 new manufacturing plants to serve the offshore wind market producing blades, foundations, towers and cables, NREL said.

All of that is on paper. “At this time, only one major facility is operational,” the lab’s report added.

Some key offshore wind project components are not produced in this country in the right sizes and properties, including bearings, large steel plates, special lead alloys and insulating plastics. New plants will be required to turn out supersized turbine blades, NREL said.

“If a domestic supply chain is not developed in time, bottlenecks in the global supply chain will present a significant risk to achieving the national offshore wind energy target,” the report concluded.

NREL offshore wind engineer Matt Shields, an author of the report, said the most critical factor in a wind component manufacturer’s decision to build a plant in the U.S. is confidence that all the wind projects in the pipeline will actually get built. “It will be important to see some of these projects start to materialize in order to build a lot of the new facilities,” he said.

Advocates for a strong federal hand in accelerating offshore wind and other clean energy investments say the U.S. is at a fork in the road.

“Even if we wanted to rebuild a resilient energy grid in the United States, there is just one supplier of grain-oriented electrical steel that’s based in the United States, which is one of the core components that goes into that,” Scott Paul, president of the Alliance for American Manufacturing, told a House Energy and Commerce subcommittee hearing last October. “We have let our capacities become incredibly thin in this time, and it showed,” he said.

While there is bipartisan support in Congress for reducing the U.S. economy’s dependence on foreign manufacturing and supply chain components, Republican and Democratic leaders are sharply split on whether federal subsidies are essential to make U.S. industry more competitive. Rep. Cathy McMorris Rodgers (R-Wash.), ranking member on the Energy and Commerce Committee, spelled out her party’s traditional position at the same October hearing.

“We need to be focused on solutions that are going to strengthen America’s economy, and not just scoring political points with more reckless spending,” Rodgers said.

“I’m concerned about trying to beat the Chinese Communist Party at their own game through expansive government subsidies. … We should be addressing significant challenges to the security of our manufacturing sectors and supply chains, like overregulation, permitting reform, tax burdens and unclear rules of the road for businesses,” she said.

On the other side of that issue, the administration and its allies continue to press for congressional action on a suite of legislation, including provisions in the stalled “Build Back Better” proposal, that would channel billions of federal dollars to accelerate U.S.-based manufacturing in strategic technologies, from computer chips to clean energy innovations. It won’t happen fast enough on its own, says this side in the debate.

Jessica Eckdish, vice president of legislation and federal affairs with the BlueGreen Alliance, representing labor and environmental groups, summed up the competing outcomes for Atlantic wind farms at a House Select Committee on the Climate Crisis hearing in February.

“We can either seize this opportunity to manufacture the steel, cement, aluminum, nacelles and other supply chain components here in the United States, or we can cede manufacturing the future of the offshore wind industry to our global competitors,” she said.