That was the problem my friend and I immediately faced upon arriving in town.

And if it weren’t for the beautiful view, I would have been more distressed than I was.

I’ve shared this with many of you a while back, but for my newer readers, you can see just how stunning it is: 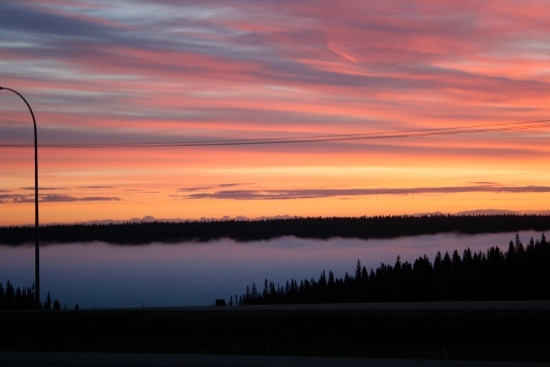 Soon after snapping that picture, my friend had managed to bribe a hotel clerk to check us into a room.

It was your typical hotel room, yet had one unique feature (at least, something I had never seen before): Everything was labeled in Chinese.

And I mean everything.

From directions to local attractions and restaurants to instructions on how to use the television, it was overwhelming. Part of me even expected to see the Bible covered in Chinese symbols, but that wasn’t the case.

Right away, I knew what was going on.

China had set its sights on the 175 billion barrels of bitumen buried underneath the Athabasca oil sands deposit.

Just one week before the explosion on the Deepwater Horizon, China Petrochemical Corp. spent $4.65 billion for ConocoPhillips’ 9% stake in Syncrude Canada Ltd.

Whenever I see the Chinese spending billions in an specific oil play, I can’t help but get excited.

Back in 2005, CNOCC spent $150 million for a stake in MEG Energy Corp., which has an interest in 800 square miles of oil sands leases.

China’s latest deal for its stake in the Syncrude project revealed a very profitable secret; a mistake that we plan to take to the bank.

But before I get too far ahead of myself, we’ll play a little catch-up for my newer readers…

For the last few years, a quiet oil war was has been raging across Canada.

Earlier this year, I gave you a brief glimpse into that secret oil war.

You see, Alberta has always been Canada’s leading energy producer. However, their lead has been slipping — thanks mostly to a stagnant royalty environment for oil and gas companies.

In their search for Alberta’s fair share, the government has forced many oil and gas companies to look for opportunities elsewhere.

And believe me, Alberta’s neighbors took full advantage of the situation…

Saskatchewan’s portion of the now-famous Bakken formation has led to record land sales, particularly in the Weyburn-Estevan area. Thanks to new drilling and completion techniques, companies in both Saskatchewan and North Dakota can extract the light-sweet crude from the formation.

And if North Dakota’s success is any indication of how things will turn out in Saskatchewan, my readers stand to make a small fortune.

If you’re new to the game — or just looking for a place to start — you can check out three of my favorite Bakken plays in this free report.

In British Columbia, natural gas drillers were quickly grabbing land in the Horn River shale play. Back in 2007, companies spent more than $240 million in new leases. Alberta, however, isn’t going to give up without a fight, and I think the future of the Athabasca oil sands will ultimately give the province an edge in the Canadian oil war.

And the future development of the Alberta oil sands is where China went wrong.

The future of the Alberta oil sands

China’s deal for 9% of the Syncrude project was a step in the wrong direction. What most investors don’t realize is that 80% of it is buried too deep for surface mining.

Surface mining has been around for decades. The original Suncor mine began operating in 1967.

I’m telling you right now that surface mining the Athabasca oil sands deposit is going the way of the dodo — and that’s China’s fatal error in purchasing a stake in Syncrude.

You see, the game is changing for Alberta’s oil sands…

The future of the oil sands is in the in-situ production. Currently, one of the best bets is in a method known as steam assisted gravity drainage (SAGD).

First developed in the 1980s, the method involves drilling two horizontal wells. Steam is injected into the upper well, which heats the bitumen enough so that it flows into the lower well; the bitumen is then pumped to the surface.

Here’s one player to look at: Connacher Oil and Gas (TSX: CLL). The company recently announced the start-up of their 10,000 barrel/day Algar plant, located at the company’s Great Divide project.

So what’s the downside to Alberta’s massive oil sands deposit?

In today’s hyper-sensitive environment, protesters are as relentless as ever.

Now, I’m not here to tell you that they’re wrong… I’ve seen the result of those huge mining operations. The environmental impact looks even more significant if you ever get the chance to fly over the area.

I will, however, be realistic.

The U.S. needs that oil. Canada is going to develop that resource and sell it to us. Those anti-oil sands campaigns are more proof that things are changing. The fact is that surface mining will not last forever. In fact I’ll be surprised if those trucks make it another twenty years. And by then, in-situ extraction will be the preferred production method.

Either the oil sands operations will evolve or everyone loses.

Over the next few weeks, we’ll look at both sides of those in-situ methods.

I’m also going to show you an old oil play that’s getting a fresh new start… and the company that’s leading the other players in the oil game.