China's electric car market is booming but can it last? 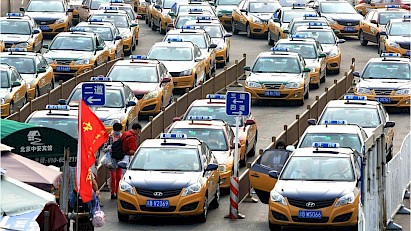 If you want to understand how governments can fuel the rise of new technologies, look no further than the taxi fleets of Beijing.

Five years ago, the city revealed plans to ban the introduction of fossil fuel-powered taxis. Today, thousands of the cars run on batteries instead. And the drivers of these electric vehicles (EVs) don’t have to worry about wasting time at charging stations, either.

Many electric taxis in Beijing, and dozens of other Chinese cities, just go to a battery-swapping station where a machine plucks out the depleted battery and installs a charged one in mere minutes.

“They want to drive out there and earn some money so they definitely don’t want to wait two hours for EV charging,” explains I-Yun Lisa Hsieh from National Taiwan University.

This is just one facet of the increasingly diverse and booming market for electric cars in China. Members of the public are also snapping up EVs in unprecedented numbers.

In July, the China Passenger Car Association predicted that 6 million new EVs would be registered in the country in 2022 - a revision of its previous forecast of 5.5 million EVs to be sold this year.

Tesla had its best ever month in China in September, according to its most recent figures, selling 83,135 cars.

Nearly a quarter of all cars newly registered in China are now electric or plug-in hybrid vehicles, meaning that the country is ahead of Europe and well ahead of the US in adoption of these technologies. Half the world’s EVs are sold in China.

And this is largely driven by government mandates and incentives, says Mr Hsieh. For more than a decade, the Chinese government has subsidised EV purchases. The value of these subsidies has fallen over time, and they are due to end by 2023, but there are still plenty of reasons why buying an electric car is a financial no-brainer.

There are other perks if you opt for an EV instead, though they differ from city to city. In Liuzhou, authorities have allowed EV owners to drive in bus lanes. And they get access to free parking spaces as well.

Then there is the potentially irresistible price tag of some vehicles. The Wuling Hong Guang Mini EV bucks the trend of EVs being a relatively expensive option. 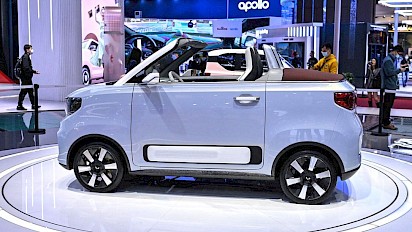 The entry-level version of this dinky, no-frills car costs the equivalent of just £4,200 and appeals to city-dwellers and first-time car owners, says Jon Hykawy, president and director of Stormcrow Capital, a consulting and research firm.

“These are vehicles that could be sold through a big chunk of Asia as well,” he adds.

The Chinese EV market is enormously competitive and lots of companies are vying for a place in it. Even an airline, Juneyao, wants to start making electric cars, according to a recent report from the Reuters news agency.

“It’s a very good environment for these manufacturers to develop technology,” says Pedro Pacheco, an analyst at Gartner, noting that the range offered by some battery EVs in China is particularly good.

And manufacturers are filling higher-end EVs with infotainment systems and other gadgetry in a further attempt to woo consumers.