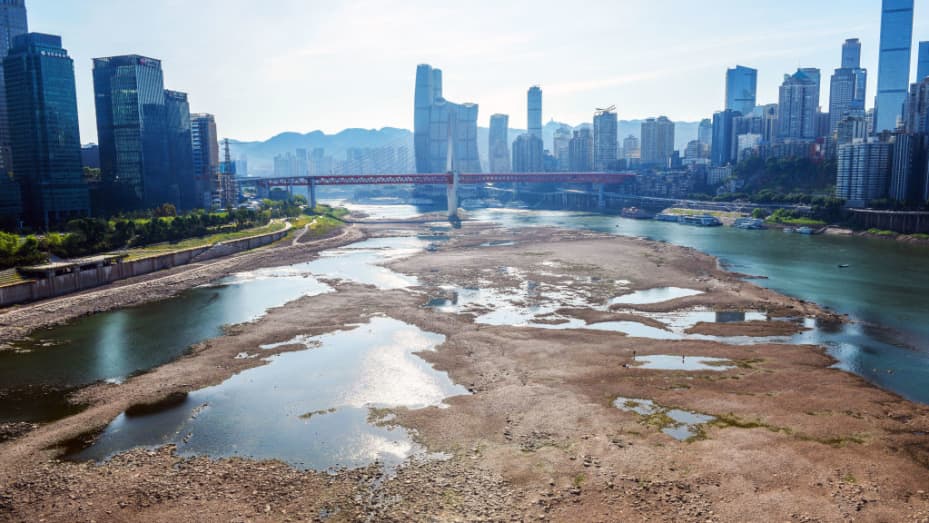 A record-breaking drought has caused some rivers in China – including parts of the Yangtze – to dry up, affecting hydropower, halting shipping, and forcing major companies to suspend operations.

A nationwide drought alert was issued on Friday as a long-running and severe heatwave in China’s heavily populated south-west was forecast to continue well into September.

The loss of water flow to China’s extensive hydropower system has sparked a “grave situation” in Sichuan, which gets more than 80% of its energy from hydropower.

On Sunday the provincial government declared it was at the highest warning level of “particularly severe”, with water flow to Sichuan’s hydropower reservoirs dropping by half. The demand for electricity has increased by 25% this summer, local media reported. The reduction in hydropower has also reportedly affected downstream populations, including Chongqing city and Hubei province.

Last week Sichuan suspended or limited power supply to thousands of factories and rationed public electricity usage due to the shortage. Toyota, Foxconn and Tesla are among companies reported to have temporarily suspended operations at some plants over the last fortnight. On Sunday the South China Morning Post (SCMP) reported plans to restart production this week had been postponed. 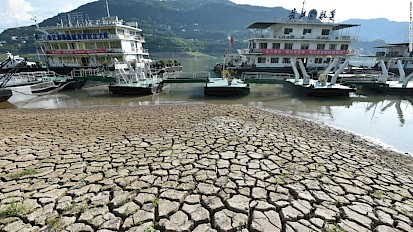 The Yangtze is the world’s third largest river, providing drinking water to more than 400 million Chinese people, and is the most vital waterway to China’s economy. It is also crucial to the global supply chain, but this summer it has reached record-low water levels, with entire sections and dozens of tributaries drying up. Water flow on the Yangtze’s main trunk is more than 50% below the average of the last five years. Shipping routes in the middle and lower sections have also closed, the SCMP reported.

Across the affected regions of China authorities are rushing to ensure water and power supply, as the region approaches harvest season for water-intensive crops such as rice and soy. On Sunday, authorities discharged 980m cubic metres of water from reservoirs in an effort to replenish lower levels of the river, state media said.

The drought has affected at least 2.46 million people and 2.2m hectares of agricultural land in Sichuan, Hebei, Hunan, Jiangxi, Anhui and Chongqing. More than 780,000 people have needed direct government support because of the drought, according to China’s ministry of emergency management. Drinking water has been trucked in to areas where residential supplies have completely dried up. High temperatures in July alone caused direct economic losses of 2.73bn yuan (£340m), affecting 5.5 million people, the emergency ministry said last week.

In the city of Chongqing the water level dropped to reveal previously submerged Buddhist statues thought to be about 600 years old.

Around the world major rivers are drying up as record-breaking heatwaves take a devastating toll, including the Rhine and the Loire in Europe, and the Colorado River in the US.

Bernice Lee, chair of the advisory board at the Chatham House sustainability accelerator in London, said societies including China have remained “unprepared and underprepared” for high-impact, low-probability events like extreme droughts and heatwave.

“Looking to the future, as the frequency of extreme weather events looks set to grow, the future could be even more bleak.”

Dr Faith Chan, the head of the school of geographical sciences at the University of Nottingham in Ningbo, said China was committed to climate change adaptions and preparing for climactic extremes.

“But it is very difficult to say what is the long-term effect on the economy by the extreme weather. For the short term, electricity use is heavily consumed and stressed,” Chan said.

Chinese authorities have repeatedly attributed the drought and heatwave to the climate crisis. Chen Lijuan, the chief forecaster of the country’s national climate centre, last week described the combined heatwave and drought as a “pressure cooker”.

“We have to face the fact that similar heatwaves will occur frequently in the future … it will become a new normal,” Chen said.

However, the immediate impact on electricity supplies has put pressure on Beijing’s climate change commitments. Last week the vice-premier Han Zheng said the government would step up support for coal-fired power production.

Warnings are in place for continued high temperatures and low rain. A red heat warning – the highest level of alert – was issued for the 10th consecutive day on Sunday for large swathes of the country.