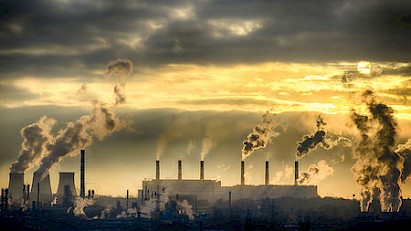 The amount of carbon dioxide piling up in Earth’s atmosphere set a record last month, once again reaching the highest levels in human history despite a temporary dip in the burning of fossil fuels worldwide caused by the coronavirus pandemic, scientists said Monday.

Scientific instruments atop the Mauna Loa volcano in Hawaii showed that levels of carbon dioxide in the air averaged 419 parts per million in May, the annual peak, according to two separate analyses from the Scripps Institution of Oceanography and the National Oceanic and Atmospheric Administration.

Those readings are about half a percent higher than the previous high of 417 parts per million, set in May 2020. Carbon dioxide is the most important greenhouse gas driving global warming and researchers have estimated that there hasn’t been this much of it in the atmosphere for millions of years.

The stark new milestone comes as leaders from the Group of 7 nations prepare to meet in Cornwall, England, this week to discuss how they might step up efforts to tackle climate change. The data provides yet another warning that countries are still very far from getting their planet-warming greenhouse gases under control. 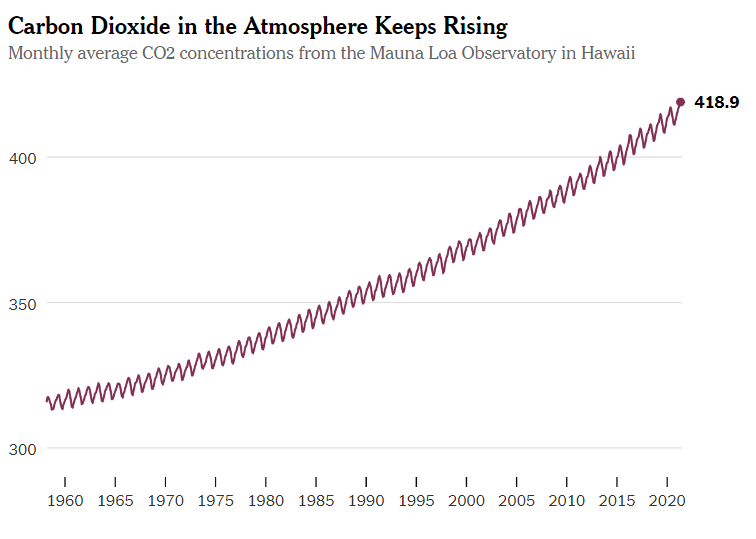 Global emissions temporarily dipped last year as countries locked down amid the pandemic, shuttering businesses and factories. According to the International Energy Agency, the world emitted 5.8 percent less carbon dioxide in 2020 than it did in 2019, the largest one-year drop ever recorded.

But that dip made little difference to the total amount of carbon dioxide accumulating in the atmosphere. On the whole, humanity still emitted more than 31 billion tons of carbon dioxide last year, from sources such as cars that burn gasoline or power plants that burn coal. While about half of that carbon dioxide is absorbed by the world’s trees and oceans, the other half stays in the atmosphere, where it lingers for thousands of years, steadily warming the planet through the greenhouse effect.

“As long as we keep emitting carbon dioxide, it’s going to continue to pile up in the atmosphere,” said Ralph Keeling, a geochemist who runs the Scripps Oceanography CO2 program. The project, begun by his father, Charles D. Keeling, has been taking readings since 1958 at a NOAA observatory on the Mauna Loa volcano.

Dr. Keeling noted that last year’s drop in annual emissions was too small to be detected in the atmospheric data, since it can be overshadowed by natural fluctuations in carbon emissions from vegetation and soil in response to seasonal changes in temperature and soil moisture. Scripps scientists have previously estimated that humanity’s emissions would need to drop by 20 percent to 30 percent for at least six months to result in a noticeable slowing of the rate of increase of carbon dioxide in the atmosphere.

And, scientists have said, there’s only one way to stop the total amount of carbon dioxide in the atmosphere from continuing to grow: nations would need to essentially zero out their net annual emissions, primarily by switching away from fossil fuels to cleaner technologies that do not emit carbon dioxide, such as electric cars fueled by wind, solar or nuclear power.

Last month, the International Energy Agency issued a detailed road map for how all of the world’s nations could reach net zero emissions by 2050. The changes would be drastic, the agency found: Countries would have to stop building new coal plants immediately, ban the sale of gasoline-powered vehicles by 2035 and install wind turbines and solar panels at an unprecedented rate.

If nations managed to hit that goal, they could limit total global warming to around 1.5 degrees Celsius, compared with preindustrial levels. (The Earth has already warmed more than 1 degree Celsius since preindustrial times.) Doing so could help humanity avoid some of the worst impacts of climate change, such as the irreversible collapse of polar ice sheets or widespread crop failures.

But so far, the agency warned, the world is not on track to hit that goal. Total annual emissions are currently expected to rise at their second-fastest pace ever this year as countries recover from the pandemic and global coal burning approaches its all-time high, led by a surge of industrial activity in Asia.

The amount of carbon dioxide in the atmosphere currently varies by about 10 parts per million over the course of a year. It reaches a peak each May, before the seasonal growth of vegetation in the Northern Hemisphere, which has about two-thirds of the Earth’s land mass, removes some of the gas through photosynthesis.

The May average first topped 400 parts per million in 2014 — a milestone that attracted worldwide media coverage. Since then, emissions have continued to soar. The latest full-year average, for 2019, was 409.8 parts per million, about 46 percent higher than the preindustrial average of 280.

“The last decade has seen the most rapid growth of any decade in human history,” Dr. Keeling said. “So it’s not just that the levels are high, it’s that they’re still rising fast.”

The current levels of atmospheric carbon dioxide are likely comparable to those seen during the Pliocene era, 4.1 million to 4.5 million years ago, the Scripps scientists said. While that period is not a perfect guide to what would happen today, it can provide some clues. By analyzing ice cores and ocean sediments, researchers have determined that temperatures during that time were nearly 4 degrees Celsius (7 degrees Fahrenheit) higher than in the modern preindustrial era and that sea levels were about 78 feet higher than today.