Can a nation replace its oil wealth with trees? 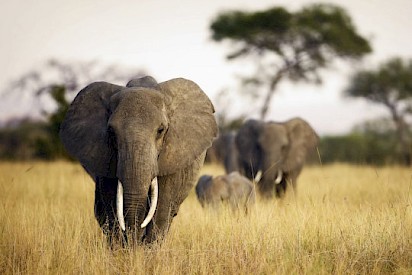 LOANGO NATIONAL PARK, Gabon — Evening and the rainforest. A riverbank packed with elephants. Treetops so dense they obscure all but a chimpanzee’s hairy arm. And, as the sun sets, a twinkle on the horizon: an offshore oil platform.

The nation of Gabon is so lush with forests and wildlife its nickname is Africa’s Eden. It’s also one of the continent’s major oil producers.

Gabon for decades has relied on petroleum to drive its economy. But officials know their oil won’t last forever. So they’ve turned to Gabon’s other abundant resource — a huge Congo Basin rainforest, full of valuable trees — to help make up the difference once the oil is gone.

Gabon is engaging in activities that have become dirty words in the world of climate activism: It allows palm-oil plantations in certain areas and is turning rainforest into plywood. However, unlike Brazil and other countries that have stood by as rainforests are decimated, Gabon has adopted strict rules designed to keep the vast majority of its trees standing. Its aim is to strike an important balance between the needs of a single nation and those of a world facing a climate crisis.

Gabon has banned raw timber exports (France was a major buyer) and created an industrial complex with tax breaks to attract furniture companies, plywood makers and others to build factories and create jobs. Rules limit logging to just two trees per hectare every 25 years. And, to fight illegal logging, a new program tracks logs with bar codes.

Gabon’s approach appears to be working, and other countries are already copying aspects of its plan, making it a potential blueprint for rainforest protection. Several Congo Basin nations have made commitments to ban raw timber exports next year, and two countries are planning industrial complexes aimed at creating jobs by transforming wood locally.

“Gabon on its own doesn’t solve these problems,” said Lee White, Gabon’s Minister of Water, Forests, the Sea and Environment. “But if we don’t have examples of countries where we are solving the problems, then who is anyone else going to learn from?”

Gabon’s forests remain among the most carbon-absorbing in the world. Yet the Congo Basin rainforest — second in size only to the Amazon — faces grave risks. Research shows that the Democratic Republic of Congo (the country with the biggest swath of the rainforest) has been losing more old-growth rainforest than any country except Brazil.

And this year Congo shocked environmentalists with plans to auction off gas and oil blocks, some of which overlap carbon dioxide-absorbing tropical peatlands, as well as parts of Virunga National Park, a famous gorilla haven.

Congolese officials have pointed to Gabon as an example of how drilling can occur without destroying rainforest. Congo’s President Félix Tshisekedi said in an interview that the revenue will be a way for his country to “have better control of its destiny.”

Mr. Tshisekedi pointed out that drilling takes place in U.S. national parks. “I want to be very clear: There is no treaty or international accord that prevents the Democratic Republic of Congo from going after its natural resources.”

The issue has come to the forefront as Russia’s invasion of Ukraine caused the European Union to vow to stop buying gas from Russia and instead look to Africa and elsewhere.

Some of Gabon’s goals are short on details and viewed as too ambitious for a country that lacks reliable roads even in some populated areas. And critics say the details of Gabon’s plans for carbon credits could wind up calling into question a market that already suffers from doubts about its integrity.

In many ways, Gabon is an ideal laboratory for conservation. It has a small but growing population of barely more than 2 million people in a nation the size of Colorado. And forest covers nearly 90 percent of its land.

The country has been ruled for decades by a family that values forests and biodiversity. It was former president Omar Bongo who first generated enthusiasm for conservation, after learning about a National Geographic show on Gabon’s forests.

He summoned his son, Ali Bongo Ondimba, to watch the show with him in 2002, and almost immediately created 13 national parks covering 10 percent of the nation.

Gabon’s oil production, meanwhile, was declining as its oil fields matured. For years, oil had provided wealth, allowing the country to avoid the desperate poverty of nearby nations. An elite few, including the Bongo family, benefited greatly. Several family members (Omar Bongo had 53 children by some counts) have been investigated for corruption. Through intermediaries, they have disputed the charges.

Omar Bongo died in 2009, during his 42nd year in power, and the younger Mr. Bongo was elected president. Oil prices were falling, and Mr. Bongo knew that its revenues, which account for almost half of Gabon’s economy, would not sustain the nation forever. He asked advisers, including Mr. White, to help him develop the economy while protecting the environment.

The resulting plan reined in logging, ended the export of raw logs, and set out to create jobs by transforming Gabon’s trees into plywood, veneers and furniture at home, not overseas.

Officials also set up a satellite research station to create a database of Gabon’s most degraded areas. Some of the degraded land and savanna was then allotted for industrial agriculture including palm oil. But more than half was left as forest. The project was declared carbon neutral by a leading international certification outfit.

Deforestation and illegal logging have declined. And the environmental emphasis has had other benefits.

The number of endangered forest elephants in Gabon has increased so significantly — from 60,000 in 1990 to 95,000 last year — that the creatures have become a nuisance and even a threat. Mr. White, the environment minister, spent part of a recent afternoon on the phone with a priest whose car had hit an elephant and was demanding reimbursement for his damaged vehicle.

Elephants are a sign of a thriving forest, Mr. White said, because reducing poaching means that other criminal activities, like illegal logging, are also less likely. “Every country that lost its elephants,” he said, “lost its forests.”

Inside Gabon’s complex, a high-end furniture gallery, strung with forestlike greenery, displays the final products: tables, bookshelves and headboards made of purple streaked kevazingo, golden bilinga and other tropical wood. The complex employs 6,000 Gabonese workers, a figure that is expected to grow.

On a recent afternoon, Jean Lumi Ngoungou was sawing planks of pinkish okoumé at a plywood factory. He got the job after being laid off from oil work. The pay isn’t as good, he said, but it supports his three children.

Overall, the timber industry now provides some 30,000 jobs, more than 7 percent of the country’s work force. That job creation is “creating a constituency,” Mr. White said. “Why would the Gabonese people, particularly the urban people, want to keep the rainforest if there are no jobs?”

Building support for conservation is important as elections approach next year. In the last campaign, Mr. Bongo’s opponents repeated the refrain: “Let the elephants vote for him.” Many people view the president, who often travels by Rolls-Royce, as out of touch amid widespread unemployment.

Not everyone embraces Gabon’s strategy. Activists have accused officials of land grabs, which government officials denied.

Mr. White has rankled some players in the carbon market with a plan for Gabon to finance its conservation by selling carbon credits, units meant to represent the carbon dioxide pulled from the air by reducing deforestation. However, Gabon is using a new method for calculating their value, resulting in tens of millions of credits it plans to offer for sale. While Mr. White is marketing them as superior to credits issued elsewhere, some skeptics have doubts. Other critics fear Gabon’s credits will flood the market, diluting prices.

Ask Mr. White about climate change and his answer begins millions of years ago, with a history of earth’s climate fluctuations, and ends in a dystopian future with a parched Congo Basin pushing hundreds of millions of desperate migrants into Europe.

That’s what’s at stake if the places like Gabon are unable to protect their forest, is his thinking. But a country’s people can’t be neglected in the meantime.

This is where oil still has a role, he says.

Since peaking in 1997, Gabon’s oil production has decreased by more than a third. Oil now accounts for 38.5 percent of the economy, according to the International Monetary Fund. By 2025, the country aims to reduce that to 20 percent.

In the meantime, it has plans to boost production of both oil and gas.

“We will continue to consume gas and diesel for many years,” until wealthier countries do more to help poorer nations finance the energy transition, President Bongo said in a written response to questions.

Gabon’s fossil fuel extraction hasn’t been flawless. Activists have accused companies of failing to modernize old infrastructure, leading to spills. And despite pledges to eliminate flaring, the intentional and wasteful burning of gas during drilling, it is still allowed.

Mr. White said flaring was being phased out, and shrugged off questions about it. On balance, he said, Gabon’s fossil fuel use is justified, considering Gabon has absorbed decades’ worth of carbon from fossil fuels burned by the West. “At least give us time to transition out of the oil economy,” he said, “rather than beating up on us because we export a bit of oil.”

Gabon allowed oil exploration inside Loango National Park about 15 years ago. But the government set strict rules, and researchers found that elephants and gorillas avoided the noise. Drilling was never carried out.

But the oil industry is at the doorstep. A refinery and wells are just outside the park entrance.

Mr. White says he wants the world to experience Gabon, its savannas, mangroves and forests, and thinks it could become the next Costa Rica, luring global travelers. Some of his more elaborate ideas for tourism involve spaceship-looking “land capsules” for viewing Gabon’s famous bodysurfing hippos.

Those plans have yet to materialize. So for now, life in Loango Park is largely undisturbed.

Recently, Western lowland gorillas were eating their way through a swamp, barely glancing at the humans who had tromped through the muck to stare at them. Elephants slurped papyrus, and a few miles upstream, the forest revealed a setting so tranquil that the loudest noise was startling: a hippo’s sloppy exhale echoing off the water.