By acting on climate change, India can gain $11 trillion in economic value by 2070 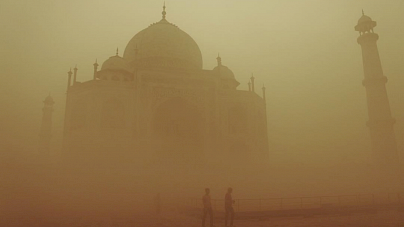 A gigantic climate crisis has an opportunity for the struggling Indian economy – if the government plays its cards right.

India could gain $11 trillion (Rs 810 lakh crore) in economic value in the next 50 years by limiting the rising global temperatures and realising its potential to “export decarbonisation” to the world, a recent report from Deloitte Economics Institute has said. Decarbonisation refers to the process of minimising carbon intensity by reducing the amount of greenhouse gas emissions produced by the burning of fossil fuels.

“As India aspires to be a $5 trillion economy, it is not just foreign and domestic investments that will be key in driving growth, we must also take this opportunity to align our ambitions with climate choices,” the report said. “In order to economise the decarbonisation benefits, India has to minimise its energy dependence upon fossil fuels.”

The report said if the country succeeds in leveraging its full potential towards decarbonisation then it would equate to a GDP growth of 8.5% by 2070, and about a $4 trillion gain in economic output.

The confidence in India’s ability to tackle climate change has come from the fact that the country is already taking some steps in the right direction. For instance, in April, India’s largest private firm Reliance Industries joined hands with the US-based Chart Industries have to commercialise hydrogen technologies and boost hydrogen production. On August 15, Prime Minister Narendra Modi also announced a National Hydrogen Energy Mission, in a push to reduce carbon emissions.

In absence of any positive climate action to mitigate the effects of climate change, the Indian economy can lose trillions in the upcoming decades.

If India does not move to low-emission fuels and reduce its dependence on fossil fuels, it could lose around $35 trillion across various sectors by 2070, as per the Deloitte report. The total damage could be 12.7% of India’s GDP.

As per the report, inaction on climate change will reduce India’s economic potential by 5.5% per year on average over the next 50 years.

Elaborating on the cost of no-action, the report listed five sectors that will incur the maximum cost of climate-related damages. “In our model, the impact would be more significant for labour and physical capital,” the report stated.

The five sectors that could witness an annual loss in the value-added to GDP of more than $1.5 trillion per year are:

Currently, these sectors together account for more than 80% of India’s GDP, Deloitte noted.

“We have a narrow window of time – the next 10 years – to make the decisions needed to alter the trajectory of climate change,” said Atul Dhawan, chairperson, Deloitte India. “No one is immune to the impact of climate change, but for India, this is a window of opportunity to lead the way and show how climate action is not a narrative of cost but one of sustainable economic growth.”