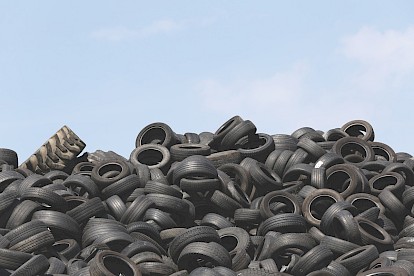 Recycling companies warn that proposed EU regulations could result in the export of millions of tires for disposal or incineration.

The European Recycling Industries’ Confederation (EuRIC) charged that the European Commission’s draft legislation, which would essentially ban the addition of rubber granules made from recycled tyres to AstroTurf sport fields, was in direct opposition to the Commission’s own circular economy agenda.

The plans, which are still susceptible to revision and are anticipated to be presented next year, call for EU to reclassify rubber infill as an intentionally added microplastic, which would essentially prohibit their use in artificial sports pitches.

Rubber infill has been added to more than 32,000 artificial pitches across Europe to replicate the feel of natural turf as this is more affordable option than alternatives such as cork or hemp.

However, a revision to such REACH legislation, which tries to replace toxic substances with safer ones, may soon make such pitches illegal. The ban covers added microplastics, including for cosmetics, cleaning products, and fertilisers.

But while tackling microplastic pollution is rightly seen as a priority, ruling out the option for end-of-life tyre recycling without developing alternatives for disposal would lead to more environmental degradation, argues Alejandro Navazas, a scientific officer with EuRIC.

“The alternatives today, if you rule out one third of the market for end-of-life tyre recycling, are basically incineration or illegal landfill or exports to places that are going to go for co-incineration,” said Navazas.

EuRIC, however, disputes these statistics, claiming that only 20 to 50 kg enter the environment annually. And Navazas added that if risk management precautions are taken, “you really bring that to almost zero.”

The European Tyre & Rubber Manufacturers’ Association (ETRMA), which shares EuRIC’s stance, issued a similar warning, stating that a ban would likely result in “the return of stockpiles in Europe, massive exports outside of Europe, and increases in the cost to collect, treat and co-incinerate tyres, significantly affecting the goals of the circular economy”.

According to EuRIC, the best option is to prevent the release of rubber infill into the environment in the first place. Instead of a ban, the trade association advocates the use of mandatory pitch side mitigation measures.

These include the installation of boot cleaning brushes which can shake loose granules and ensure they remain in the area of the pitch, grates designed to capture microplastics at the entrance and exit of pitches, and the addition of microfilters to rainwater drains on the side of pitches in order to prevent granules from entering the sewer system.

Not all organizations, though, are against the proposed prohibition.

The Rethink Plastic Alliance and Seas at Risk, two organizations working to conserve marine life, both expressed support for the proposed REACH regulations.

The infill materials that are subject to the ban typically contain harmful additives, such as heavy metals and volatile chemical compounds, according to Frédérique Mongodin, senior marine policy officer with Seas At Risk.

Despite the infill’s chemical composition, a study by the ECHA’s Risk Assessment Committee concluded that AstroTurf pitches with rubber infill did not pose any health risks to players. However, if consumed, they are harmful to local wildlife.

The REACH review, which was initially expected to be released before the end of 2022, has been delayed until 2023 as a result of an opposition from the chemicals industry, which was backed by the center-right EPP group in the European Parliament.