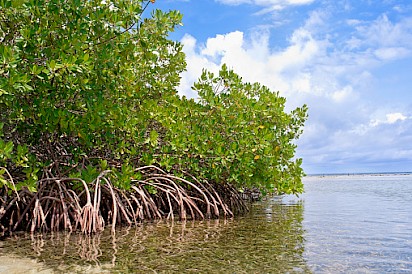 The research team was more than 100 miles inland from the coast, skimming along the San Pedro Martír River near the Mexico-Guatemala border, when the unexpected appeared: a forest of mangroves lining the edge of a wide, shining lagoon along the river.

This wasn’t where the trees were supposed to be. They’re usually tethered to narrow zones on coasts, where they thrive in punishing salty water and storm surge.

Somehow here they were, dozens of feet above current sea level and above a set of waterfalls. After careful analysis, the team discovered something even more remarkable: These mangroves are a living relict of a former world. Their ancestors arrived at this spot about 100,000 years ago, when the planet was about as warm as it is today, but sea levels were many feet higher. As the seas receded, this population managed to survive.

“We put together a picture of a lost world,” says Octavio Aburto-Oropeza, a researcher at the Scripps Institute of Oceanography and the lead author of the new study, published in Proceedings of the National Academy of Sciences.

This ancient seacoast, far from the modern shore, could help researchers around the world understand exactly how much higher sea levels were during that last warm period, a topic of much debate and extreme importance to those hoping to understand how far today’s oceans could rise as the world warms.

‘A living relict of an ancient world’

While it’s possible for mangroves to survive outside the usual narrow coastal strip, they can’t compete well with other plants, says Véronique Helfer, a mangrove specialist at the Leibniz Centre for Tropical Marine Research. “Normally, they are limited to the intertidal.”

The newly found inland mangroves have been able to survive miles from any coast thanks to surrounding soils that leach massive amounts of calcium into the lagoon and river waters, creating a liquid environment similar enough to seawater that the trees can persist.

And the mangroves aren’t alone. There are also elegant orchids, delicate ferns, sea grapes—plants that commonly live with mangroves today. Ancient oyster shells are lodged in sediments below the mangroves’ woody roots. Old sand dunes and beachy pebbles stretch away from the lagoon’s edges.

The bigger question, Aburto-Oropeza and his colleagues asked, was how and when did the mangroves get to this spot. Mangroves don’t usually spread very far or fast; they stay local. Seeds—which sprout while still on the tree—fall into tidal waters and most often float a short distance before putting down roots nearby, says Neil Saintilan, a mangrove expert at Australia’s Macquarie University.

Water wouldn’t have been able to carry baby mangroves upstream and over tall waterfalls, so the ancestors of these trees must have arrived when this place was a coast, Aburto-Oropeza and his colleagues theorized.

To test that hypothesis, they compared the genetic makeup of the mangroves to others that dot the distant Yucatan coastline. “The history of any organism on earth is written in their DNA,” says Felipe Zapata, a biologist at UCLA who performed the genetic analyses.

If the inland mangroves grew during that past warm stage and became stranded when sea levels dropped, they should be genetically distinct from the modern trees—and that’s what the genome analysis showed is clearly the case.

But the team went a step farther. Cells make insignificant accidents as they copy genetic material, and those tiny changes accumulate at a surprisingly regular rate, like a molecular clock that ticks off genetic time. That clock suggested that the lagoon mangroves had been isolated from their closest relatives for about 100,000 years, making them “a living relict of an ancient world,” says Aburto-Oropeza.

The timing lines up closely with a period in Earth’s past when sea levels were much higher than they are today. But exactly how much higher is still an open question.

Throughout its history, Earth has gone through huge climate shifts driven by changes in its wobbly orbit. At times the planet has tilted nearer the sun and absorbed heat more effectively. At other times its orbit has stretched along one axis, farther from the warmth of the sun. Global temperatures have swung up and down in response.

Those temperature changes have dramatic effects on sea levels. During the great ice ages, such as the one that gripped the planet about 20,000 years ago, giant ice sheets covered North America as far south as the Great Lakes and Long Island. Antarctica’s ice spread wider than its current limits. Vast amounts of water were locked up in ice, causing sea levels to drop. Colder oceans were also smaller, extending coastlines sometimes miles from their current locations. During warm phases, by contrast, the ice melted and the ocean water expanded, raising sea levels.

Earth’s most recent warm phase peaked about 120,000 years ago, when global temperatures were about 0.5 to 1.5 degrees Celsius (0.9 to 2.7 Fahrenheit) higher than they were before the Industrial Revolution. That’s within the range of the roughly 1°C (1.8°F) above the preindustrial average that the planet has warmed to now. Most countries that signed the Paris Climate Accords agreed to limit total warming to less than 2°C (3.6°F), and ideally to less than 1.5°C (2.7°F).

“The world wasn’t all that different in terms of its climate state,” says Alex Simms, a geologist at the University of California, Santa Barbara who has studied the sea level history of the Gulf of Mexico. “So, does that mean we should expect to see sea levels five meters higher, or even more, in the next 1,000 years or so?”

The differences matter a lot. Even one meter (3.2 feet) of rise would inundate huge swaths of coast that host major cities, economic centers, and cultural resources. Some 770 million people live at elevations less than five meters (16.4 feet) above today’s mean sea level. A rise of nine or 10 meters (29.5 to 32.8 feet) would be catastrophic. So any data that can help pin down what happened in the past can help researchers make firmer predictions of future risks.

How high did seas go?

But establishing where sea levels stood more than 100,000 years ago, when the mangrove forest’s ancestors put down roots, is tricky. Often, researchers look for evidence of ancient coastlines, such as corals or sand dunes. They then measure the distance between those and today’s coastlines to determine the difference in sea levels, but myriad issues complicate that measurement, such as tidal changes and local geology. The source of the melting ice—Greenland versus Antarctica, for example—can also complicate sea level records at faraway sites.

The lagoon mangroves were found higher than nine meters (28.5 feet) above today’s sea level. The team also found some geologic evidence: A family nearby was digging a well, and a few meters down they found a thick layer of seashells and sand, which the researchers confirmed was part of an ancient beach about 10 meters (32.8 feet) above sea level.

This number is at the very highest end of the estimated sea level rise many scientists think was possible during the Last Interglacial period. But it’s likely that the elevation the team found doesn’t represent a full nine meters of past sea level rise, explains Nicole Khan, a sea level expert at Hong Kong University. The number might be artificially high because of geological changes deep in Earth’s mantle.

The Yucatan site is likely affected by a process called glacial isostatic adjustment. When big ice sheets form, like the one that covered North America during the last glacial period, they’re so heavy that they push the crust below them down, like a body sinking into a mattress. The crust in turn pushes the mantle down. The mantle, in response, bulges outside the area being squished, creating a lump or ridge—a “forebulge”—that’s higher than it would be otherwise.

The Yucatan is probably in the range of the forebulge from that enormous ice sheet, meaning the region is still probably higher than it used to be, levered up by the now-gone ice sheet. A recent study suggests that in the nearby Caribbean, that effect may be as big as a few meters. If the same were true at this site, the nine or 10-meter-high beach they found could actually represent a lower sea level.

There are still big questions to answer about the sea level part of the story, says Khan. But the important part is that this research adds to the reams of data showing that major sea level changes are possible in conditions not very different from current ones.

“From the sea level standpoint, this and other work makes it clear that they have been much higher than today, even without us messing with the climate, so we should really be prepared for much higher sea levels,” says Simms.