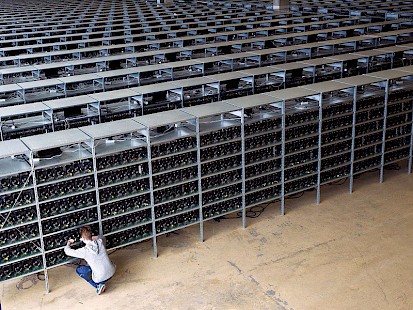 Jiang Zhuoer became a multimillionaire a few years ago by operating some of the most lucrative mines in China. His commodity? Bitcoin.

Jiang had about 300,000 computers humming around-the-clock in 20 specially ventilated warehouses across remote northern China, guzzling enough electricity to power a small city. The sophisticated machines cost hundreds of millions of dollars. The digital currency they minted was worth even more.

Today, Jiang, a fast-talking 36-year-old, is winding down in China. He and several Chinese investors — some who became billionaires off bitcoin mining — are considering shipping their equipment to Texas and Tennessee.

For years, Chinese miners like Jiang were enabled by the glut of cheap — and often dirty — electricity in China, where a massive fleet of coal-fired plants and hydroelectric dams fueled the country’s rise into an industrial behemoth. At their height in 2018, China’s bitcoin prospectors accounted for 74 percent of the world’s bitcoin production.

But this year, Chinese authorities are cracking down on cryptocurrency to dial back energy consumption and meet their climate goals, sending miners scattering. And increasingly, miners are decamping for places like Texas, South Dakota or Canada, launching a mass migration with implications for the evolving industry and the new communities that will house it.

Jiang recently pulled tens of thousands of his machines out of Chinese regions including Inner Mongolia, which has not only banned mining but encouraged citizens to call a government office to report illicit mining.

“You know they’re getting serious,” Jiang said, “when they set up snitching hotlines.”

On May 21, top economic officials in Beijing pledged to “crack down on bitcoin mining and trading,” an announcement that sent the worldwide price of bitcoin plummeting. In recent weeks, Chinese social media users have complained that some crypto topics were being censored, while Chinese police have announced the arrests of more than 1,000 people in cryptocurrency-related financial crimes.

That sudden chill, Chinese bitcoin miners and executives predict, will only deepen. The Chinese government has appeared uneasy not only about the industry’s carbon footprint but also the intrinsically uncontrollable, decentralized nature of cryptocurrency.

Yemu Xu, the co-founder of Bella Protocol, a cryptocurrency banking service provider, said Chinese miners who see the writing on the wall have been trying for years to migrate to countries such as Iran and Kazakhstan to cut costs. In the past year, interest has grown in countries that have not only cheap power but also “stable political regimes, mature regulation and better policy support.”

“As a result, mining in countries like the U.S. and Canada have been picking up,” he said.

But the arrival of industrial-scale mining in U.S. communities could raise the same thorny questions about the technology’s environmental impact that have vexed officials in China.

Researchers at the Chinese Academy of Social Sciences this year predicted China’s bitcoin mining industry by 2024 could consume more energy than Italy. University of Cambridge researchers estimated that bitcoin miners globally accounted for more energy use than Argentina.

Alex de Vries, a financial economist who has long criticized bitcoin’s energy consumption, predicted the migration of China’s bitcoin miners will have repercussions.

“You’re talking about energy demand potentially the size of a small Western country that needs to be relocated somewhere else,” he said. “It’s a massive problem to find a new home for all of these miners.”

Earlier this year, a dispute erupted in New York state’s Finger Lakes region between local activists and a Connecticut private equity firm that had converted an old natural gas-fueled power plant into a bitcoin mine. As a result, the New York state legislature is considering a bill that would block new bitcoin mining in carbon-producing power plants.

Other jurisdictions have taken the opposite tack. In March, coal-rich Kentucky passed a law offering tax breaks to miners that invest $1 million in installing new machines in the state.

Either way, the growth in the U.S. cryptocurrency mining industry is expected to continue as larger investment funds are drawn in, especially if bitcoin can return to its near-all-time-highs above $60,000, industry insiders say.

“In China, miners might not have somewhere to go anymore and they’re thinking, how can I move some of my portfolio someplace else?” said Mike Colyer, chief executive of Foundry, a Rochester, N.Y.-based company that helps miners purchase tens of thousands of computers at once and assemble them in industrial locations. “But it’s not just the Chinese. Right now, everyone is scrambling to get machines plugged in.”

Colyer said he has also helped identify and convert real estate, such as abandoned aluminum factories that have the electrical infrastructure capable of handling enormous wattages, into bitcoin farms.

One Chinese miner, who spoke on the condition of anonymity because he feared political repercussions in China, said he predicted 60 to 70 percent of his peers would migrate their operations to the United States or Europe. He said he is building about 50 shipping containers to house his computers to plop onto an oil field in West Texas, and is breaking ground on a 33-megawatt site in Newfoundland and Labrador, Canada.

“Right now in China, everybody’s scared. The question is not whether you pull out, but immediately or gradually,” the miner said. But he added that there were regulatory uncertainties in the West, too.

“U.S. local communities don’t necessarily like bitcoin farms,” he said. “We need to be aware of that, and the environmental policy risks because the Biden administration might take a harsher stance on bitcoin.”

Other Chinese miners have fewer compunctions about seeking new frontiers.

Jiang ticked off a number of disadvantages to expanding in the United States: too many “environmentalists who worry about wildlife and the birds,” he said, and too much “White liberal idiocy” preoccupied with climate change — the science of which he has doubted. U.S. electricity was six times more expensive than in China, he estimated, and he would have to pay relatively high wages to I.T. staff to keep his computers purring.

Even so, Jiang said he was considering two sites in Texas and Tennessee. It seemed less risky than other places, including the Middle East, where he had operations shut down by authorities, or Russia, where his colleagues’ expensive computers have been seized by corrupt police.

And right now, everywhere seemed a safer bet than China, where regulators can be mercurial and unforgiving.

“A change in government policy that suddenly forces out all miners — that would never happen in America,” Jiang said. “It’s a capitalist system.”