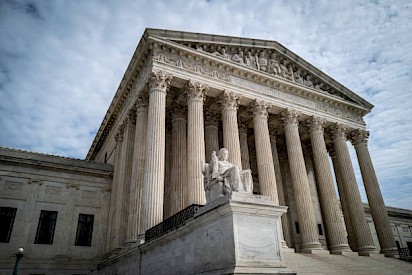 Lawyers for the oil and gas industry are asking the Supreme Court for help in a second climate liability lawsuit, arguing that without the justices’ intervention, U.S. energy policy “may be decided by juries in state courts.”

Attorneys for Chevron Corp., BP PLC and Exxon Mobil Corp. on Friday petitioned the justices to overturn a lower court decision that delivered a procedural victory to the city of Baltimore, which is suing the companies to pay potentially hundreds of billions of dollars for spewing emissions that have led to flooding, erosion and other climate impacts.

The companies’ plea marks the second such request from the oil industry in recent months, and — if the case becomes one of the tiny few that the justices grant — it would provide the Supreme Court a second shot at a jurisdictional question that for years has stymied Baltimore’s climate liability lawsuit and nearly two dozen others like it.

In response to a related Supreme Court petition stemming from a similar lawsuit from Colorado governments, the justices on Oct. 3 invited the Biden administration to share its views on whether climate liability lawsuits belong in the state courts where they were originally filed or in federal courts, where oil and gas companies believe they are more likely to prevail.

Companies involved in BP v. Baltimore asked that the Supreme Court hold on to their petition pending a ruling in the Colorado case, Suncor Energy Inc. v. Boulder County, which involves a court decision that sided with several Centennial State governments.

The justices are expected to decide whether to accept or reject the Boulder petition after the Biden administration weighs in. It takes the vote of four justices to grant a petition, and most requests are denied.

In the Baltimore petition, oil industry attorneys noted that before President Joe Biden took office, the federal government “expressed the view that climate change claims similar to those alleged here are removable” to federal court “because they are inherently and necessarily federal in nature.”

They referred to the Trump administration’s stance on the jurisdictional dispute. The Biden administration has yet to give its opinion, although the president promised during his campaign to support the climate litigation.

Local governments from Rhode Island to Hawaii are suing the oil and gas industry, claiming companies deceived consumers by lying about the effects of burning fossil fuels.

The payout from the legal actions is potentially huge — if the municipal challengers can move the litigation past the question of whether the claims should be heard in state or federal court. Baltimore originally filed its climate liability lawsuit in 2018.

The procedural issue in the climate cases has reached the Supreme Court once before, with the justices siding with industry in their 2021 ruling in BP v. Baltimore that said appellate judges must consider a wider range of arguments in favor of federal jurisdiction.

A new string of losses for the companies at the federal level has prompted their requests for a second round of intervention by the high court.

“Climate change is an issue of national and international magnitude that requires a coordinated federal policy response,” Chevron attorney Theodore Boutrous, a partner at the firm Gibson, Dunn & Crutcher LLP said in a statement. “This global challenge does not lend itself to a patchwork of baseless lawsuits in state courts pursuant to state laws.”

He said the cases can be resolved “only in federal courts — which should promptly dismiss them — because of their sweeping implications for national energy policy, national security, foreign policy and other uniquely federal interests.”

Sara Gross, chief of the affirmative litigation division in the Baltimore City Department of Law, said the Supreme Court should uphold an April ruling from the 4th U.S. Circuit Court of Appeals in Baltimore’s case, which “affirmed for the second time that ‘these claims do not belong in federal court.’”

Gross noted the 4th Circuit also wrote that the industry’s position “defies logic” and that lawyers for the companies did not present the court with any “federal question” that Baltimore says is “essential to resolving” its claims. The city shaped its case around provisions of Maryland law.

Boutrous and other attorneys for the companies argued that the 4th Circuit got it wrong when the judges found no reason to stop Baltimore’s case from proceeding in state court.

“Despite recognizing that respondent’s claims seek redress for harms allegedly caused by the contribution of transboundary emissions to global climate change, the court proceeded to hold that no federal rule of decision governs respondent’s claims,” industry lawyers wrote.

They argued that federal law supplies the “rule of decision” for certain claims that implicate “uniquely federal interests,” including where “the interstate or international nature of the controversy makes it inappropriate for state law to control.”

Attorneys for the companies maintained that “for over a century, a mostly unbroken string of cases” has applied federal law to claims seeking damages for injuries allegedly caused by interstate pollution.

“As the Court has explained,” they wrote, “federal common law must govern such controversies because they ‘touch basic interests of federalism’ and implicate the ‘overriding federal interest in the need for a uniform rule of decision.’“

Watch, listen, and learn more about the Frontline Docuseries on “The Power of Big Oil” » GO.