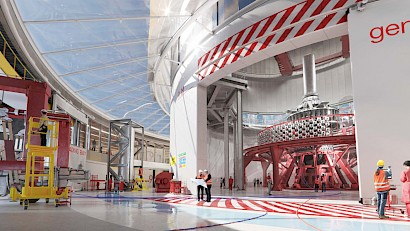 Inside an airy circular building that will soon be built in a field near Oxford, England, a new machine filled with swirling liquid metal—and plasma heated to more than 100 million degrees Celsius—will begin giving visitors a close look at the potential of nuclear fusion technology.

“This is really a stepping stone to a first commercial plant,” says Christofer Mowry, CEO of General Fusion, the Jeff Bezos-backed startup that created the technology. Fusion has huge potential: It could be a low-cost, nearly limitless source of carbon-free electricity that doesn’t use much space for production, and unlike traditional nuclear plants that run on nuclear fission, it doesn’t risk meltdowns (if there’s a disturbance, the reaction stops) or create long-term radioactive waste. (At traditional plants, fission splits atoms and produces large amounts of unstable uranium, but fusion produces only helium, an inert gas, and much smaller amounts of tritium, which is radioactive, but for a much shorter time.) Scientists have been pursuing the concept for decades: The running joke is that nuclear fusion is the energy source of the future, and always will be. There’s a very real chance that it may not ever succeed. But Mowry and some others believe that it may finally be possible now.

The technology mimics what happens at the center of the sun, where hydrogen and helium collide and merge, releasing enormous amounts energy. “To re-create a piece of the sun on Earth, as you can imagine, is very, very challenging,” Mowry says. “And it’s really required modern supercomputers and advanced modeling and computational techniques to understand the science of plasma physics.” Manufacturing technologies and materials have also advanced. “That’s really opened the door not just to being able to make fusion work but to make it work in a practical way,” he says.

The company’s approach builds on technology originally developed by the U.S. Navy. (Russian scientists also worked on similar technology during the Cold War for potential use in weapons.) Inside the machine, molten metal is spun to create a cavity, and pumped with pistons that push the metal inward to form a sphere. Hydrogen that has been heated to super-hot temperatures, held in place by a magnetic field, is injected into the sphere to create the fusion reaction. Heat transferred into the metal can be extracted to make steam to drive a turbine and generate electricity.

Unsurprisingly, it’s difficult to make work, and even if it does work, it’s difficult to generate more energy than the energy needed to run the machine. Even at this new demonstration center, the company isn’t planning to generate electricity, but rather to gather the data needed to later build a commercial pilot plant that could. Many experts are skeptical that the future step will succeed. “The probability that you’re going to build a pilot plant that actually produces one milliwatt of nuclear power are very remote, I would say,” notes Edward Morse, a nuclear engineering professor at the University of California, Berkeley.

At the new demonstration plant, which will begin construction in 2022 and is scheduled to open in 2025 at the U.K. Atomic Energy Authority’s Culham Campus, the company will combine processes that it has been testing individually, and aims to “show that we can make fusion work practically at full scale in a power-plant-relevant environment, so we’ve developed and tested all the systems that are involved in this thing up to full scale,” Mowry says. “You can think about it like building an engine and a transmission and a suspension system of a car, and now finally putting those pieces together and showing you can drive it down the road.”

Several other startups, including the MIT spin-off Commonwealth Fusion Systems, also expect to demonstrate working technology relatively soon, though General Fusion may be first to come to market if it succeeds. In France, a machine built in collaboration among 35 different countries is also getting closer to a test that will show whether it can generate plasma.

If fusion technology can work as its boosters hope, it could help fill a gap in the world’s transition to zero-carbon energy. Wind and solar power continue falling in cost, but it’s still expensive to store that energy so that it’s always available. Renewable power plants and batteries also take up space. Mowry argues that the compact design of the nuclear fusion technology is a better fit for dense cities. “You need something that complements both renewables and storage,” he says.

The company wants to make people more aware that nuclear fusion can be part of the energy mix. “Part of what we want to do with this demonstration plant is make the promise of fusion something that is more in the public’s consciousness, and in the policymakers’ consciousness, so as they plot what the future energy systems look like, they consider how to incorporate fusion in that,” Mowry says. “Because it will be coming here faster than people realize.”