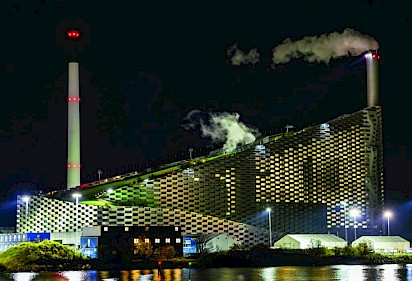 These types of waste typically offer a higher calorific value than municipal solid waste because the waste stream is more consistent, which means less processing costs. Long-term, these plants can be designed to incorporate carbon capture and potentially provide another revenue stream.

Andrew says energy-from-waste providers are looking to establish facilities that can process up to 200,000 tonnes of waste per annum, because they can be cost effective when provided with a consistent  feedstock from local companies.

Several facilities are being proposed for existing or new industrial estates in Victoria, as well as one in Queensland.

“Commercial and industrial companies have waste to dispose of,” Andrew says. “It’s a cost to them to transport and dispose of in a regulated industrial landfill, particularly if it’s food or building waste.

“If you’re just filling up landfill, you should start thinking, what are you doing next? It makes sense to take it to an EfW facility rather than pay a landfill or hardfill site to park it.”

Andrew says similar facilities have been operating in Europe and the United Kingdom for years. In the UK several hubs are now taking the process further and creating hubs for carbon dioxide sequestration into old oil and gas reservoirs.

“Once Australia has a price on carbon dioxide emissions there will be a greater incentive to trap it and do something with it so that it doesn’t escape into the atmosphere,” Andrew says.

The technology is ready and available now.

“Landfill is a low-cost solution today, but in future we’re going to have to be a bit smarter.”

Andrew says B&W, a US-based clean energy and environmental technologies company with regional offices in Australia, has developed methods to use this type of waste to produce energy while at the same time isolating the carbon dioxide in a concentrated stream that will provide a more cost effective way for it to be used as feed stock for other value adding processes or sequestration.

“Municipal and industrial waste are considered renewable energy sources, and the captured carbon dioxide would be considered biogenic carbon dioxide, as opposed to carbon dioxide captured from burning fossil fuels,” he says. “We can use this source of CO2 to produce higher value products such as methanol and fertilisers and perhaps even take it up to the next level in sustainable aviation fuels.

“Having these types of plants give you options because you can do something with what you’re collecting. Initially you can avoid emissions and have an alternative to landfills, but ultimately capturing CO2 is a way to carbon negative emissions.

“There’s no reason why we can’t achieve minimal waste while delivering economic and environmental benefits.”

Economics, Andrew says, is a key driver for smaller, localised waste processing facilities in industrial areas. For the EfW operators it is a smart way to recover waste streams with minimal processing. For industry, it’s having to pay to transport and landfill waste versus the alternative of turning waste into energy where they can save some money from it.

“The company can get rid of their waste in a better way, there are no emissions and it’s in line with good environmental, social and governance outcomes,” Andrew says.

“The driver for development of EfW facilities needs to be social, from the community. For business, it has to be an alternative that still makes sense economically.”

Andrew says the technology is ready to go, it just takes someone to stand up and say, “let’s do it.”

He says one of the challenges of EfW is overcoming the NIMBY (not in my back yard) aspect. That, he says, comes down to education and asking the community to question whether they want to put waste in a hole in the ground forever.

“The better way to deal with all of that waste is to put it through a waste-to-energy facility,” he says. “You don’t have the methane emissions created by decomposing waste in a landfill, and you know when you put waste into an incineration process you will destroy all of the methane.

“If we’re looking at a circular economy you have to have the ability to collect and process waste and make the most of it.”

Two EfW plants are presently being established in Western Australia. Once commissioned, they will process the municipal solid waste for the entire Perth area. Andrew says there is scope for similar-style plants strategically placed to service Melbourne, Sydney and Brisbane.

He’s hopeful once the WA plants are operational the community will see that energy-from-waste is complementary to recycling and is cost-effective and economically sound.

“It is important to note that we should never look at an EfW facility purely as an electricity generating device,” he says. “It should be viewed as a waste disposal device first and foremost because we want to get rid of our waste and manage emissions.”