Coincidence or not, one day after the release of data by Brazil’s National Institute for Space Research (INPE) — showing that deforestation in the Brazilian Amazon has topped 11,000 square kilometers, reaching a 12-year high — the French government officially launched its plant protein development plan, which had been in preparation since at least last January.

Julien Denormandie, French Minister of Agriculture and Food, stated that the goal of the plan is “to recover part of France’s agri-food sovereignty, reducing dependence on vegetable protein, and to stop importing deforestation.”

Denormandie’s reference to imported deforestation, though nonspecific, was almost certainly aimed at Brazil, infamous for its tropical deforestation due to agribusiness expansion in the Amazon, especially under the Jair Bolsonaro administration. At present, France is the European Union nation importing the most Brazilian soy flour — a total of nearly 2 million tons annually. Under the new plan, those imports will be drastically reduced.

Between August 2019 and July 2020, Brazil saw the highest rate of Amazon deforestation in more than a decade, with an increase of 9.5% compared to the same period the year before. Also over that same time period, the number of fines imposed by IBAMA (Brazil’s environmental agency) against illegal deforesters in the rainforest biome fell 42% from 3,403 to 1,964 citations. The amount of fines applied in those 12 months is the lowest in the history of IBAMA, according to FakeBook.eco, an initiative of the Climate Observatory, a network of civil society organizations.

On Tuesday, December 1, the French minister declared: “Today, in France we have only one million hectares [2.4 million acres] dedicated to the cultivation of oilseeds (canola, sunflower, flax) and legumes (soy, peas, pods). This area is expected to increase by 400,000 hectares [988,422 acres] in three years, until reaching 2 million hectares [4.9 million acres] in 2030 … Our target today is cutting soybean imports coming from the American continent.”

France imports 3.3 million tons of soybeans per year, and it is the largest buyer of Brazilian soy flour in the European Union. Of the 2.2 million tons of this product purchased between July 2019 and 2020 by France on the international market, 1.9 million tons were from Brazil. Other supplier countries to France are Argentina and the United States.

French producers signed a term of commitment in which they will undertake to achieve the goal set by the government. In return, producers will receive a grant of 100 million euros (US $121 million) for two years to finance the cultivation and research of protein crops. 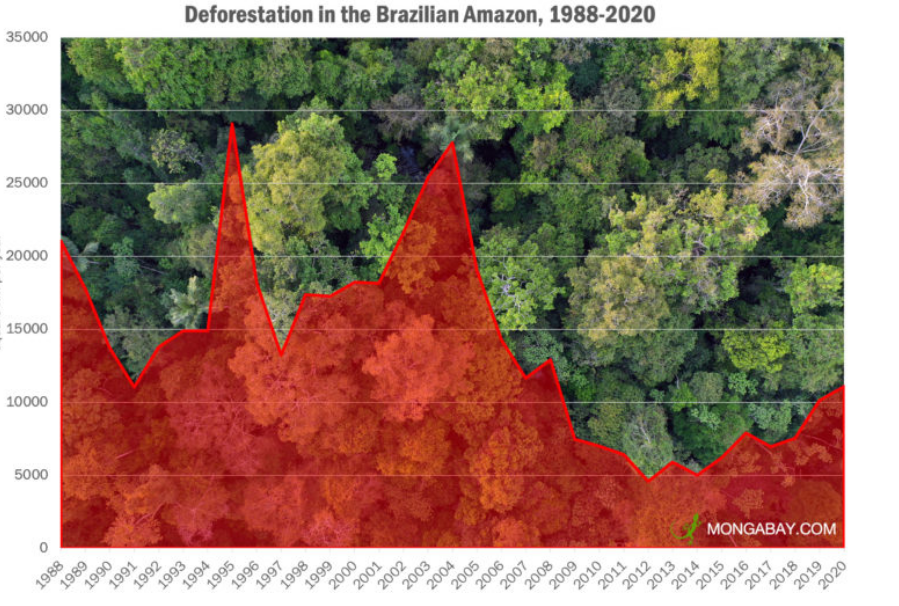 The potential loss of France as a Brazilian soy customer comes after relations between the two countries soured over Bolsonaro’s plans to develop agribusiness and mining in the Amazon, with utter disregard for deforestation and fires. In August 2019, a spokesperson for French President Emmanuel Macron declared that the EU member could no longer support signing the Mercosur trade deal — the biggest trade deal in history — involving the EU, Brazil and other South American nations. Referring to 2019’s catastrophic Amazon fires, the spokesperson said, “In these conditions, France will oppose the Mercosur deal as it is.” The Amazon, the world’s largest rainforest, sequesters tremendous stores of carbon, and its loss could seriously destabilize the global climate.

“The Bolsonaro government will insist so much on being a world’s villain in the environmental arena that it will drive away those who… [buy] Brazilian products,” Marcio Astrini, executive secretary of the nonprofit Climate Observatory, told Mongabay. “There is a growing international desire to be more careful with the purchase of Brazilian products, or even not buy them, so as not to get involved with deforestation in the Amazon. We are already seeing this — a growing wave of rejection of Brazilian products.”

Brazilian soy producers and commodities companies have grown increasingly concerned that Bolsonaro’s extreme anti-environmental rhetoric and policies will cripple their industry. But the French move to distance itself from Brazilian soy may be just the first such economic impact. Much worse could be in the offing if France, Ireland and other nations refuse to ratify the US$19 trillion Mercosur trade agreement between the EU and a Latin American bloc including Brazil.

Economic pressure on the Brazilian government by the EU is clearly building. On Wednesday, December 3, Ignacio Ybáñez, the EU ambassador to Brazil, said in an interview that the Mercosur agreement ratification is now in standby, awaiting the South American country’s concrete actions to combat deforestation and fires.

“If trust is not restored, and … the European partners do not see that there is a will in the Brazilian government to put the idea of sustainability at the center of its activities, the agreement will not be able to pass,” said Ybáñez.