Argentina's Bahia province appears to have no solution for waste tires 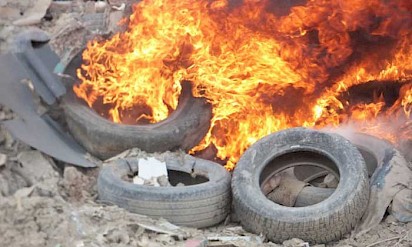 With an estimated 150,000 tons of waste tires produced annually in Bahia (Argentina), the province seems to lack a solution to the problem of end-of-life tires.

The impact of the waste tyres is due to several factors, among which are their composition since they contain 80% rubber, 15% steel and 5% textile fibre, and compounds that take thousands of years to degrade.

A report in La Nueva magazine examined the situation in depth.

La Nueva reports that it is very common to see a large number of abandoned tires in vacant lots in Bahia, which can contribute to the proliferation of rodents, insects, mosquitoes and associated diseases.

Burning, another of the usual practices seen on the outskirts of our city, is also a big problem, since the smoke is highly toxic to living beings and generates a large amount of greenhouse gases. That is why, experts say, they must be disposed of in a safe, responsible and environmentally sustainable manner.

Beyond the fact that the municipality signed an agreement a little over a year ago with the company RENFU SAS for the management of this type of waste, little has been done so far to prevent uncontrolled stockpiling.

“There is no fixed treatment schedule. There are temporary programs that are carried out once a large number of tires have been collected, but that is not the solution to this serious problem for the environment,” said Maximiliano Rodríguez Intrevado, technology consultant and one of the founders of QReciclas.

“I don’t know if there is any tire treatment project in our city. In Argentina, at the national level, there are regulations on the subject, but between now and compliance is another matter”, recognized the biologist Martín Quevedo, Secretary of the Environment of Asura Bahía Blanca Regional.

The solution is the correct management of the tires, emphasizing collection and transportation, determining the final disposal site and, as a last step, identifying possible treatments and reuses.

In Argentina, at the national level, there are regulations on the subject.

“But between now and when they are fulfilled is another matter,” said Martín Quevedo.

According to the report, Argentina has a variety of regional regulations that result in varied treatment across the country.