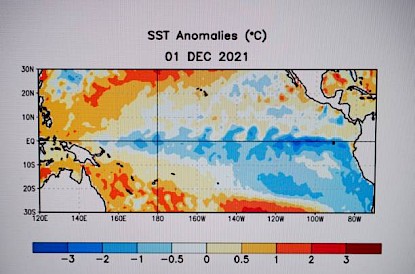 The 2015-16 El Niño fueled deadly record cyclones in the South Pacific and Mexico, as well as  severe droughts that resulted in thousands of early deaths from fires and haze in southeast Asia and tens of millions going hungry amid crop failures in southern Africa.

Strong El Niños like that one could happen more frequently in the future as Arctic sea ice starts to disappear in the summer, according to a recent study published in Nature Communications. The research is the first to find a direct link between sea ice loss and the occurrence of El Niño, a warming of surface water in the eastern Pacific off of Peru that encourages higher global temperatures and extreme weather around the planet.

Research has already indicated that the warming Arctic is affecting weather in the mid-latitudes, such as when polar vortex “stretching” likely contributed to a deadly cold wave in Texas last year. But the new study suggests that changes in the Arctic will also influence the tropics.

“We will see an ice-free Arctic in the near future,” said lead study author Jiping Liu of the University at Albany in New York state. “The loss of Arctic sea ice can influence the frequency of strong El Niños, so Arctic sea ice loss influences global weather and the climate.”

The Arctic is warming at a rate up to four times faster than the planet as a whole and has lost a third of its sea ice volume in just two decades. It’s expected that by 2050, year-round Arctic sea ice will melt entirely during some summers. One study even predicted this could happen by 2035.

El Niño usually happens naturally every three to five years, with the irregular occurrences named for the Christ child by Peruvian fishermen who noticed the ocean warming trend around Christmas. Liu said he was surprised to find that the high-emissions global warming scenario computer models used in the study predicted that total summer sea ice loss could promote the most drastic kind of El Niño, where Pacific sea surface temperatures increase by 1.5° Celsius (2.7° Fahrenheit) or more. The models found that the frequency of these strong El Niños could increase by 35% before the end of the century.

That suggests that melting sea ice could trigger more heatwaves, droughts and other extreme weather events associated with strong El Niños around the globe. Liu is now working on research to confirm this influence. Warming water temperatures during strong El Niños can also cause widespread coral bleaching and reef death.

Jennifer Francis, acting deputy director of the Woodwell Climate Research Center who was not involved in the study, told Mongabay that the new research gives some of the most compelling evidence yet of long-distance climate links, or teleconnections, between the Arctic and other regions. Francis co-authored a landmark 2012 study showing that Arctic warming is triggering changes in the jet stream, a band of fast winds circling the polar region that typically bottle up cold air around the north pole. Her work sparked an ongoing debate as to whether Arctic warming affects weather further south, and to what degree.

The effects of human-caused Arctic warming are “reaching all the way down to the tropics. It’s not just influence on the mid-latitudes, it’s not just influence on the jet stream,” she said. “Everything’s connected, and it’s really pretty disturbing to see these strong El Niños projected to increase by quite a lot.… Devastating weather events seem to be associated with that.”

According to Liu’s modeling results, sea ice loss could drive strong El Niños via changes in the movement of both winds and water. Firstly, without the Arctic Ocean summer ice cover, those northern waters could transfer more of their heat energy to the atmosphere, intensifying a low-pressure system off the coast of Alaska called the Aleutian Low. The strengthened winds around the Aleutian Low would then blow against the Trade Winds that typically push warm water west near the equator, allowing it to “slosh” back into the eastern Pacific, where El Niños form.

Secondly, the Arctic Ocean will become less cold without summer ice to reflect sunlight back to space, slowing the poleward movement of warm water out of the eastern Pacific. “The Arctic can say to the tropics, ‘you can keep the heat,’ so we have tremendous heat buildup in the tropics,” Liu explained.

Although the Nature Communications study ran two different sets of models to confirm its results, these models come from the same family. The next step in the research will be to try to replicate the connection between sea ice loss and El Niño using different climate models and different future emissions scenarios, according to professor James Screen, a sea ice and modeling expert at the University of Exeter who was not involved in the study.

Screen noted that Liu’s modeling was done using the RCP 8.5 high carbon emissions scenario, which assumes global warming of 4 to 5 degrees Celsius by 2100, even higher than the 3.2°C predicted if the world’s nations meet their current carbon emission reduction pledges under the Paris Climate Agreement. Each fraction of a degree of warming that the world can avoid likely decreases the chances that Arctic sea ice will disappear completely every summer and that stronger El Niños will become more frequent.

An ice-free Arctic could have many other impacts, recent research has shown. A paper published in Science last month found that the western Arctic Ocean is acidifying three to four times faster than other ocean basins due to escalating ice loss, according to data from 47 research voyages between 1994 and 2020. Open water exposed to the air by receding ice absorbs more carbon dioxide, which increases acidity. This effect could corrode the shells of mollusks and other invertebrates, although more research on these impacts is needed.

This summer, a climate modeling study published in Weather and Climate Extremes showed that the melting of sea ice in the Greenland Sea, which normally “shields” Norway’s Svalbard archipelago from moist air originating further south, has increased the likelihood of extreme precipitation in the islands. Deluges like one that caused a landslide onto a road in Longyearbyen in 2016 are going to get more common as sea ice continues to decline, the study predicted.

“The climate crisis is here today. It’s affecting people today, it’s affecting ecosystems today, and it’s piling on,” Francis said. “We’ve really got to get on the stick and do whatever we can to slow it down.”