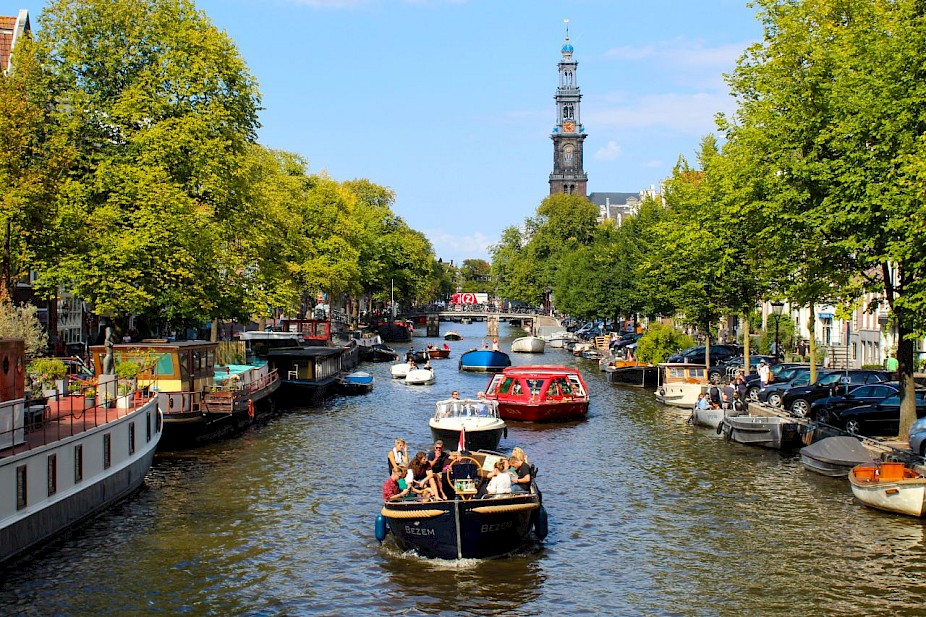 The Netherlands’ network of barriers, dams and wind-powered pumps has long enabled Dutch city-dwellers to build and live on the water. But even the most advanced flood control system has its limits as sea levels continue to rise, spelling uncertainty for the future of development in Amsterdam over the next century — in particular, its waterfronts.

The city’s engineering achievements were on display during the Bloomberg CityLab summit this week, as attendees took a ferry tour down the IJ River. Urban planner Zef Hemel pointed out a series of formerly industrial man-made islands and peninsulas on the eastern bank, known as the Eastern Docklands, that the city has spent the last 30 years redeveloping.

What was once empty swampland is now lined with rows of mid- to high-density housing, as well as museums, concert halls and other recreational facilities featuring striking modern architecture. Among the most recognizable is the NEMO Science Museum, which is built atop a tunnel. Designed by the renowned Italian architect Renzo Piano, it has a curved, copper-green facade resembling a ship’s bow rising from the water. The sloped rooftop houses a piazza, gifted by Piano, who felt the city lacked a public square.

“We are almost halfway now, so another 20 to 30 years to go,” Hemel said of the Eastern Docklands development progress. “And then we can conclude this huge — what would we say — public works development.”

Built on reclaimed land (like much of Amsterdam), the area served as the city’s main seaport until the end of the 1960s, when the needs of shipping companies outgrew the capacity of its docks. The site sat abandoned for roughly 20 years as harbor activity moved to where the city center is today. Warehouses and other buildings were left to decay, some demolished and others occupied by squatters and artists.

But that decade would be a pivotal one, with the city facing a population boom and little room left inland to build.

Officials began looking at the Eastern Docklands, taking inspiration initially from Baltimore and New York City, which had undergone their own waterfront revitalization efforts. The young Dutch architect Rem Koolhaas even proposed putting a highway along the waterfront like in New York, which was initially endorsed by the city — to the community’s dismay.

That ultimately stalled when the city’s public-private partnership with its developer fell through, opening an opportunity for the officials to rethink their approach. Soon they embarked on a massive project to redevelop the area into compact, sustainable communities.

It would be filled with vibrant neighborhoods, and plenty of affordable housing for its growing population. More importantly, it would embrace the city’s most abundant natural resource. “It’s all about water, and living with water,” Hemel said.

Amsterdam currently lies two meters (6.6 feet) below sea level, with many of its historic buildings constructed atop millions of wood pilings driven deep down to meet a layer comprising rock, compacted sand and clay. The city operates its own flood defense network in conjunction with the larger regional system: Locks, sluices and pumping stations built as far back as the 19th century have essentially stopped any tidal movement in the city, allowing excess water to drain into the North Sea during extensive rainfall.

But Maarten Ouboter, a hydrologist at the regional water company Waternet, says that as the region’s flood vulnerability increases, systems may not be able to keep up. Nationally, current flood protections are designed to be sufficient only until 2050 — although as experts say sea levels are rising faster than expected, engineers are constantly improving them.

Meanwhile in Amsterdam, increasingly heavy rainfall will test the limits of the city’s combined sewage system, built between 1872 and 1987 to collect both wastewater and rainwater. “There’s only space in the overflows for water to raise about 25 centimeters [9.8 inches],” Ouboter said. “This means that all the water that comes to our system has to be pumped away immediately. It’s not the storage system.”

The city will have to innovate around that limitation, he added, as rebuilding the entire sewer system would cost billions.

Such challenges will change the way Amsterdam continues developing. It may not, for example, rely on building artificial islands much longer to solve its housing crunch, because that would affect water levels. “So the party is over, in a way,” Hemel said.

These development changes won’t come without conflict: “In the future, we will have to keep track of the water and [build] houses that will probably still be there in 100, 200 years,” Ouboter said. “So the choices we make have to be very much conscious of long-term development, which is very hard to do, because money-wise you look at investments for a shorter range of time.”