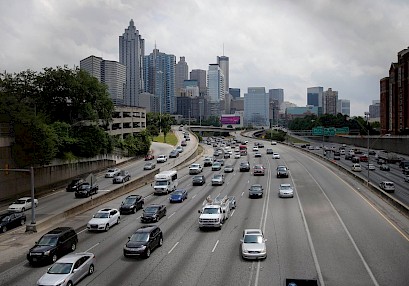 If COVID is scary as the media and Bill Gates wants you to believe — then why would anyone want to take public transit?

If America is dominated by car culture and the call of the open road, there is a big reason for that: Over the past 65 years, the United States has spent nearly $10 trillion in public funds on highways and roads, and just a quarter of that on subways, buses and passenger rail.

But President Biden’s $2 trillion infrastructure plan, unveiled this week, represents one of the most ambitious efforts yet to challenge the centrality of the automobile in American life, by proposing to tilt federal spending far more toward public transportation and coax more people out of their cars. Experts say that transformation is necessary to tackle climate change, but could prove extremely difficult in practice.

As part of his plan, Mr. Biden wants to spend $85 billion over eight years to help cities modernize and expand their mass transit systems, in effect doubling federal spending on public transportation each year. There’s also $80 billion to upgrade and extend intercity rail networks such as Amtrak. That would be one of the largest investments in passenger trains in decades.

And, while Mr. Biden’s plan offers $115 billion for roads, the emphasis would be on fixing aging highways and bridges, rather than expanding the road network. That, too, is a shift in priorities: In recent years, states have spent roughly half of their highway money building new roads or widening existing ones, which, studies have found, often just encourages more driving and does little to alleviate congestion.

“There’s no question that the share of funding going toward transit and rail in Biden’s proposal is vastly larger than in any similar legislation we’ve seen in our lifetime,” said Yonah Freemark, a senior research associate at the Urban Institute. “It’s a dramatic shift.” 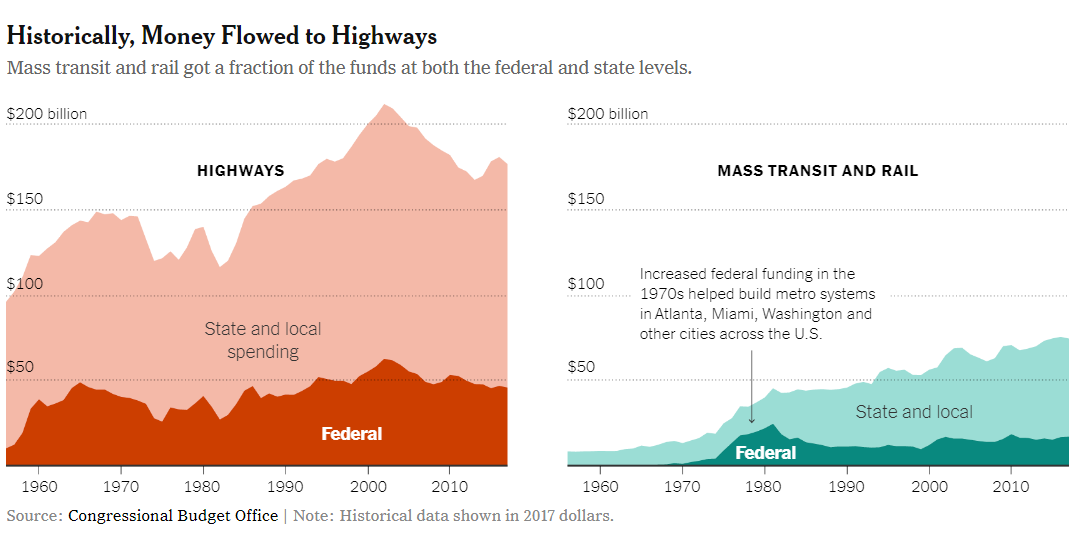 When Congress writes new multibillion-dollar transportation bills every few years, typically about four-fifths of the money goes to highways and roads, a pattern that has held since the early 1980s. To many, that disparity makes sense. After all, roughly 80 percent of trips Americans take are by car or light truck, with just 3 percent by mass transit.

But some experts say this gets the causality backward: Decades of government investment in roads and highways — starting with the creation of the interstate highway system in 1956 — have transformed most cities and suburbs into sprawling, car-centered environments where it can be dangerous to walk or bike. In addition to that, other reliable transit options are scarce.

“We’re almost forcing everyone to drive,” said Catherine Ross, an expert on transportation planning at the Georgia Institute of Technology. “The choices that individuals make are deeply shaped by the infrastructure that we have built.”

Transportation now accounts for one-third of America’s planet-warming greenhouse gas emissions, with most of that from hundreds of millions of gasoline-burning cars and S.U.V.s. And, while Mr. Biden is proposing $174 billion to promote cleaner electric vehicles, experts have said that helping Americans drive less will be crucial to meeting the administration’s climate goals.

“Far too many Americans lack access to affordable public transit, and those who do have access are often met with delays and disruptions,” Mr. Biden said on Wednesday. “We have the power to change that.”

But Mr. Biden, a longtime Amtrak rider and proponent, will face hurdles in trying to make the United States more train- and bus-friendly.

His plan still needs to get through Congress, where lawmakers in rural and suburban districts often prefer money for roads. Nationwide, new transit projects have been plagued by soaring costs. The coronavirus pandemic has also led many Americans to avoid subways and buses in favor of private vehicles, and it remains unclear when or whether transit ridership will bounce back.

The Biden administration may also have limited ability to sway the actions of state and local governments, which still account for the vast majority of transportation spending. Many key urban planning decisions — such as whether to build dense housing near light-rail stations — are made locally, and they can determine whether transit systems thrive or struggle.

“States are the emperors of transportation,” said Beth Osborne, director of Transportation for America, a transit advocacy group. “But so much of the culture of our current program is based on what has come out of the Department of Transportation, so it’s an important statement if the Biden administration is saying it’s time to pivot.”

Analysts cautioned that the White House still has not revealed key details of the plan. Its effectiveness may hinge on how the proposal gets integrated with transportation bills currently being worked on in Congress, which could adjust the balance of funding between highways and transit or impose conditions on how states can use federal funding.

Still, some transit agencies say a large infusion of federal money could be transformative. Many urban transit systems are more than a half-century old and struggle to secure enough funding to address their growing backlog of needed repairs. That typically leaves little money left over to consider major new expansions.

In Philadelphia, the Southeastern Pennsylvania Transportation Authority needs federal aid to move forward on a $2 billion plan to extend rail service to King of Prussia, a fast-growing job center, as well as a $1.8 billion plan to modernize the city’s aging trolleys, said Andrew Busch, a spokesman for the agency.

In the Bay Area, federal funding would be necessary to extend the Bay Area Rapid Transit light-rail system to San Jose and create a regional network of car-pooling lanes, said Randy Rentschler, director of legislation and public affairs at the region’s Metropolitan Transportation Commission.

Mr. Biden has also proposed spending $80 billion to upgrade and expand intercity rail service such as Amtrak. Right now, the busiest Amtrak route is the Northeast Corridor between Washington, D.C., and Boston, which Amtrak says needs $38 billion for upgrades and repairs.

Other cities have infrequent and often inconvenient connections. For instance, to travel from Cincinnati to Chicago by rail, there is just one train per day. The trip takes nine hours and the train departs at 1:41 a.m.

Amtrak has suggested that, with $25 billion, it could greatly expand its network by 2035, adding 30 routes to cities currently unserved by intercity rail, like Las Vegas and Nashville, and improve service along 20 routes to cities like Houston and Cincinnati. Amtrak claimed that annual ridership would increase from 32 million today to 52 million, cutting greenhouse gas emissions by displacing car and air travel.

Yet attempts to expand America’s transit and rail systems may run into pitfalls.

Building infrastructure in the United States has become notoriously expensive and difficult compared with other countries. In California, a plan for high-speed rail between Los Angeles and San Francisco that received federal funding from the Obama administration has struggled with repeated delays and cost overruns, and it remains unclear whether even a partial segment will be finished before 2030. The Biden proposal mentions this cost problem, but is vague on ideas for how to fix it.

Another challenge will be ensuring that funding goes to the most effective projects. “When a lot of money is raining down from the top, states and localities will do whatever they can to get that money,” said Paul Lewis, vice president for policy and finance at the Eno Center for Transportation, a nonpartisan research center in Washington. “Sometimes, that money may go to projects that aren’t the best projects.”

Mr. Lewis noted that improving the nation’s transportation system isn’t always a question of laying down new cement and steel. Often, the most effective changes may be operational, such as charging people more to drive during rush hour to alleviate congestion, lowering speed limits to improve traffic safety or increasing the frequency of bus routes to make them more useful to riders.

Some experts have also questioned whether the Biden administration will try to rein in local governments’ preference for major highway-expansion projects that, critics say, continue to deepen the nation’s reliance on automobiles.

The administration has signaled a more skeptical stance toward highways. On Thursday, the Federal Highway Administration took the unusual step of pausing a planned expansion of Interstate 45 near Houston, amid concerns over increased air pollution and the displacement of Black and Hispanic communities. Separately, the Biden administration’s infrastructure proposal includes $20 billion to improve road safety, including for pedestrians, as well another $20 billion to “reconnect neighborhoods” that were harmed by past highway projects.

But it remains to be seen how these programs will work. For instance, without strict conditions from the federal government, some states could simply take federal money intended for road repair and safety and then use their own state funds for further highway expansion.

“If this money isn’t accompanied by real policy changes,” said Kevin DeGood, director of infrastructure policy at the Center for American Progress, “then states will just keep doing what they’ve always done, which isn’t equitable or green.”