A Thanksgiving history lesson, in a handful of corn 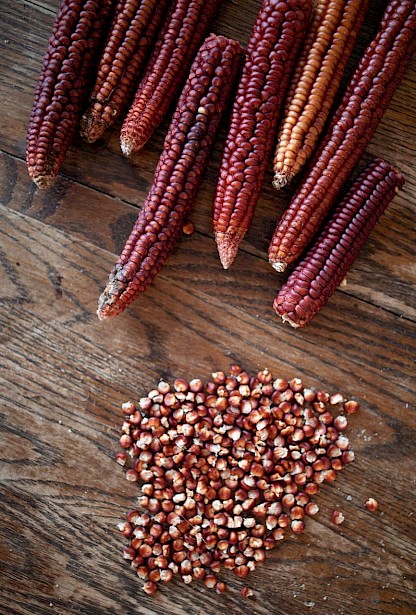 In September, Danielle Hill Greendeer harvested 200 to 300 ears of hard, red-kerneled King Philip corn she had planted in the Mashpee Wampanoag Tribe’s community garden in Mashpee, Mass. Although it was her first crop, Mrs. Greendeer, a tribal member, likes to say that the corn came back to her.

“This is the corn Wampanoag people have historically grown in this area,” she said. “It’s kind of cool that it’s looping back around to the Wampanoag community, because we haven’t grown our corn on our lands in hundreds of years.”

Those lands once stretched from Narragansett Bay to Nantucket, Martha’s Vineyard and the Atlantic beaches of Cape Cod. They extended north to the current site of Plymouth, Mass., where the Pilgrims held a harvest celebration 400 years ago that has come to be known as the first Thanksgiving.

They did not call it that, no matter what generations of students have been taught. The Native people who came to the celebration were Wampanoags, though, and the corn that was served was Wampanoag corn. If it wasn’t the King Philip strain, then it was another closely related variety of sweet, deeply flavorful Northern flint corn.

Today only a few farmers plant kernels from those heirloom lines. But cornmeal — usually ground from another hard maize called dent corn — is one of a handful of main ingredients found on Thanksgiving tables across the continental United States, baked into loaves, muffins and sticks; crumbled into stuffings and dressings; and steamed with molasses and eggs in a custard that has been known as Indian pudding since the era when the colonists referred to ground corn as Indian meal.

In that corn — written, in a sense, into its genetic code — is the story of the people who lived in Plymouth and throughout the Western Hemisphere before Europeans arrived.

If you know how to read the corn, it can tell you about the civilization those people built. It can tell you why, when the wheat crop planted with grain brought from Europe failed, Wampanoag corn kept the Pilgrims from starving, and why it wove itself so deeply into the diets of the European settlers and their descendants.

Unlike deer or cranberries, maize wasn’t just there for the taking. Its long history of cultivation goes back at least 9,000 years, according to archaeologists. Through selective breeding, Indigenous people living in the Balsas River Valley, south of Mexico City, turned teosinte, a wild grass with little value as food, into a crop bearing ears of large, closely packed kernels that were dense with protein and other nutrients.

This new strain had been altered so much from the naturally occurring grass that it could not survive in the wild. Neither can its descendants. To keep any line of maize from dying out, farmers have to plant it faithfully, keep it far from any other variety and save some kernels for next year.

From the Balsas Valley, maize traveled. Long before Columbus, it was being grown across the Western Hemisphere, including the Caribbean islands. Along its path, Native peoples adapted the maize for their own climate, again through selective breeding.

In Arizona, Hopi farmers developed maize that could be planted a foot below the surface of high desert valleys, many inches deeper than other strains, down where meltwater from winter snows lingered into spring. Their maize has roots that can dig even deeper to find moisture, and shoots strong enough to reach the desert topsoil.

At the other end of the continent, in Quebec and northeastern Maine, Mi’kmaq people bred a fast-growing strain called Gaspé whose two-foot-tall stalks yield short, stubby ears that are ready to pick as soon as 45 days after planting. This is about half the time most corn needs to ripen, making Gaspé the earliest maturing Northern flint corn.

Tony VanWinkle, an anthropologist who teaches sustainable food systems as a professor at Guilford College in Greensboro, N.C., has helped grow Gaspé corn in Vermont, in partnership with the Nulhegan Band of the Coosuk Abenaki nation. That and other work with corn have left him with profound respect for the agricultural skill of the Indigenous people in whose hands the crop once flourished.

This prowess has seldom been recognized by outsiders “because of an inheritance of very limited and narrow stereotypes,” he said. “But they were incredibly sophisticated farmers.”

One of their refinements, taken from Mesoamerica and adapted to local conditions, was the “three sisters” method of planting maize and beans in mounds, with winter squash between them. The cornstalks give the beans a pole to climb. The broad squash leaves shade the ground, keeping water in and weeds out.

Europeans settlers quickly learned to appreciate the local maize they acquired by theft and by trade.

Appreciation for the people who had shaped it to thrive in the local climate did not follow. Native people were killed or forced to move to other places. Along the way, they often lost the corn was at the center of their diets and their cultural and spiritual lives.

The corn survived. Davis Farm in Stonington, Conn., at the state’s southeastern tip, still grows a white flint corn that the family obtained around 1654 from a local tribe. According to documents in the Mohegan Tribe’s archives, their founding chief, Uncas, gave it to Thomas Stanton, the farm’s founder. Stanton, the chief’s friend and military ally, acted as an interpreter for the Mohegans and operated a trading post on the river.

The farm’s current operator, Larry Davis, said the white corn kept his grandparents and other families in the region alive through the Depression. “There were a lot of farms around here that had it back then,” he said. “But as they’ve died off, gone out of business, it’s disappeared.”

Across the hemisphere, heirloom lines of corn have dwindled or died out as more productive but far less flavorful dent corn strains came into favor, particularly on large-scale farms.

Mr. Davis said his farm has lost the King Philip corn that once grew there, but has kept its white flint line going. He now guards it jealously. He will sell you all the ground corn you want, but not a kernel, much less a whole cob.

“The only way corn gets out of here is if it goes through my mill,” he said.

He knows of just one exception to this policy in his lifetime: In 1996, his father gave seed corn back to the Mohegans, after the tribe won federal recognition.

Over the past few decades, other tribes have been reunited with their heirloom maize. Corn and other seeds are also a focus of a growing food sovereignty movement that seeks to give Native people control over their own food supply. The Indigenous Seed Keepers Network, founded in 2015, supports Native people who want to grow their traditional crops again, through seed exchanges and other programs.

Rowen White, a member of the Mohawk Tribe who is one of the network’s organizers, draws a parallel between the return of Native crops to Native hands and the repatriation to tribes of artifacts and human remains held in museums. But she prefers to say the seeds have been “rematriated,” in part because women were the farmers in Mohawk and other communities.

Mrs. Greendeer has several plans for her first crop of King Philip corn. She wants to cook it into three sisters soup together with her squash and beans for the Wampanoag harvest festival. She will send some back to Truelove Seeds, the company that gave her the kernels to plant through its rematriation program, and trade some with other tribal members who want to grow the corn.

“The ultimate goal would be in coming years for the tribe to grow it on larger scale, make a Wampanoag cornmeal out of it and sell it,” she said. It would make a nice addition, she thinks, to the Ute Mountain Ute Tribe cornmeal she sells at the shop she owns in Mashpee, the Wampanoag Trading Post & Gallery.

These goals are part of an attempt to revive the deep, almost symbiotic relationship between corn and humans.

“For Native people, it’s not just about growing out the corn and bringing it back home,” Mrs. Greendeer said. “It’s about creating a spiritual connection and relationship with this being, the corn. She’s alive. So the goal is to ingest it and become one with the corn.”

The past doesn’t always define us, but the stories we tell about it do. That’s their purpose.

The United States is in the middle of a fierce battle over the stories Americans tell themselves about how the nation was built and what it stands for today. Dramatic and at times violent conflicts have erupted over monuments to Confederate soldiers, institutions named after slave traders and plantation owners, the history lessons children learn and the books they read. Efforts to revise popular narratives about history to include Black, Indigenous and other points of view that have been ignored, and resistance to those efforts are now a central feature of political life.

One aim of many stories Americans tell about Thanksgiving is nation-building. In 1863, when he called for its first observance as a national holiday, President Abraham Lincoln asked “my fellow citizens” to “fervently implore the interposition of the Almighty Hand to heal the wounds of the nation and to restore it as soon as may be consistent with the Divine purposes to the full enjoyment of peace, harmony, tranquillity and Union.”

Another aim is to paper over the long and shameful history of killing Native Americans, driving them from their land and shattering their culture. For many Native people, Thanksgiving is a national day of mourning, a time to remember what they have lost since Europeans first sailed into sight.

Mrs. Greendeer has just finished her own tale of the original 1621 feast, a children’s book to be published next year called “Keepunumuk: Weeâchumun’s Thanksgiving Story.” Written with two other Native American authors, the book is narrated by a Wampanoag woman who tells her grandchildren that the protagonist of the Pilgrim’s harvest feast was the corn.

A plague had killed many Wampanoags before the Pilgrims arrived, and in the winter of 1620-21 the Pilgrims were dying off, too. Seeing all this, the corn asks the Native people to show the newcomers “how to take care of me” so they won’t starve, Mrs. Greendeer said.

Her book is “about corn in our culture history and culinary world, and her taking a position of authority and guidance over people,” she said. “All people, without discrimination.”