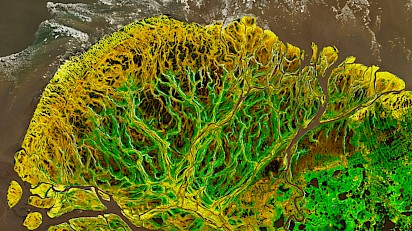 The westward journey of the mighty Yukon River takes it from its headwaters in Canada’s British Columbia straight across Alaska. The river has many stories to tell, of generations of Indigenous people hunting on its banks and fishing in its waters, of paddle-wheeled boats and gold panning and pipelines.

Where it meets the Bering Sea, the river fans out into an intricate delta resembling cauliflower lobes of river channels and ponds. The delta has a story to tell, too — that of an increasingly green Arctic.

A composite image of the delta’s northern lobe, taken May 29 by the U.S. Geological Survey’s Landsat 8 satellite, shows willow shrublands lining river channels as they wind toward the sea. Farther inland, tussock grasses carpet the tundra. Grasslike sedge meadows populate low-lying wetlands, punctuated by ponds left behind by springtime floods along the riverbanks from snow and ice that have melted upstream.

In southern Alaska, such as in the Kenai Peninsula, the Arctic has been getting noticeably greener since the 1980s, as global temperatures climb (SN: 4/11/19). Researchers observed this change using satellite measurements of red and near-infrared light reflected off the vegetation. Now, analyses of changing vegetation in the Yukon Delta and nearby Kuskokwim Delta show that more northern areas are getting greener too, researchers report June 1 in Earth Interactions.

The increasing prevalence of tall willows, an important moose habitat, is one sign of these changes in the delta. Moose populations, too, are on the rise. But for the Yukon and other Arctic deltas — where higher floodwaters due to climate change are likely to deposit thicker sediment piles, supporting more greenery — many more changes are likely to come as the planet warms.