A new Australian high-rise will be covered in 1,182 solar panels 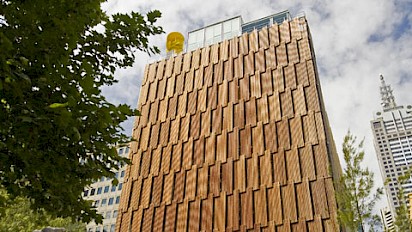 When a new high-rise office building is built in Melbourne, Australia, next year, its facade will include 1,182 solar panels. Along with extra solar power on the roof, the building will be able to power itself completely.

“The building is designed to be self-sustainable,” says architect Pete Kennon, who led the design. “We can harness electricity on-site and use it immediately. This is very different to buildings that are offsetting their on-site power with remote solar or wind farms.” One advantage: Because the electricity doesn’t have to travel hundreds or thousands of miles, it’s more efficient and helps reduce strain on the grid.

The design will be the latest to use panels from a German company called Avancis, which makes each glass panel in the same thickness as an ordinary facade; thin film solar cells are built into each panel. The product doesn’t look like typical rooftop solar panels—and it isn’t even apparent that the facades include solar at all. The panels come in a variety of colors, from a dark gray used on a municipal building in Amsterdam to a deep blue on a building in Berlin.

In Melbourne, where the biggest source of energy consumption is often air-conditioning, Kennon used a solid version of the panels on one wall to help shade it from heat, saving the amount of energy needed for cooling. Both the building’s heating and cooling systems will run on electricity from the solar panels. The tower will be the first in Australia to use the technology; the project is going through the final stages of getting approval from regulators now.

Building materials like cement and steel, and the construction process, create a large amount of “embedded emissions” for any building. But as the new tower generates more renewable power than it needs—eliminating around 70 metric tons of CO2 emissions a year—Kennon says that it can pay off its carbon debt and truly be carbon neutral, without offsets, in a few years.

This type of solar facade should be used on more buildings, Kennon argues. “It feels urgent to innovate our building technologies to more sustainable methods,” he says. “Collecting solar is a natural trajectory on our large-scale projects, particularly in locations that have great access to sunlight.”