A climate change guide for kids 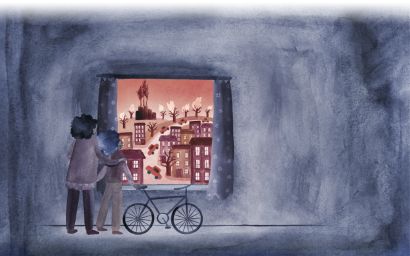 If you’re a kid, almost every year you’ve been alive has broken a temperature record, or come close. You’ve witnessed huge wildfires, intense droughts and severe storms. This is what climate change looks like, and it’s here to stay.

The planet is going to change a lot more in your lifetime. Things could get really bad. Or, if we take action now, we could avoid the worst effects. You can help decide. So, let’s take a look at how both scenarios could unfold.

But first, how did we get here?

Take a look around your home. Your lights, refrigerator and television are all powered by electricity.

For most of human history, we lived without it. But since the late 1800s, electricity has become an essential part of modern life. Americans now use 13 times as much as they did in the 1950s.

Your home probably gets electricity from power lines that run along your street. They lead to a power station, one small part of a vast energy network that keeps our houses, businesses and factories running.

Historically, we’ve produced electricity by burning fossil fuels like coal, oil and natural gas. These substances also provide most of the energy used for heat and nearly everything else humans do.

Today, fossil fuels are big business. People use almost seven billion tons of coal every year and roughly 100 million barrels of oil and other liquid fuels every single day.

Fossil fuels form deep underground from the remains of ancient plants and animals. When we extract them and use them for energy, we release prehistoric carbon into the air as carbon dioxide and methane.

These greenhouse gases work like a blanket: As the sun’s energy warms the planet, they prevent some of Earth’s heat from escaping. Human-caused emissions have already made the climate hotter than it’s been in at least a thousand years. And we keep producing more.

When we burn fossil fuels, we also produce pollutants that can cause health problems.

These pollutants hurt low-income people and communities of color the most. Those people often live near pollution sources like power plants or major highways because of housing prices and discrimination.

In the United States, cars and trucks are a major source of both harmful pollutants and greenhouse gases. Over all, transportation produces more than a third of the country’s carbon dioxide emissions.

Greenhouse gases also come from less obvious sources. Think about the concrete buildings and sidewalks in your town.

The cement that holds them together is made by crushing and heating limestone, which requires energy and releases carbon dioxide. Cement, steel and other industries account for about 20 percent of global emissions.

What we eat matters, too. Cows and other livestock produce greenhouse gases when they burp, fart and poop. Gases also seep from crop fields.

In some places, like the Amazon Rainforest, people cut down trees to clear lands for farming. And this releases large amounts of carbon stored in wood and soils. Globally, agriculture and other ways of using the land account for about a quarter of all greenhouse gas emissions.

If we continue on like this, the planet will keep getting hotter and the effects of climate change will get worse. Let’s take a look at this scenario,whichwe’llcall“TheBadFuture”becauselifewill get harder for many people and other living things.

In The Bad Future, most places on Earth will be hotter, although there will still be some cold days. School and sports will be canceled during intense heat waves.

High temperatures could even be fatal for vulnerable populations like older people and those who work outside.

Changes in the weather will make it harder for us to grow food. In certain places, water supplies will dry up.

Many people will leave their homes in search of better places to live, and the poor will suffer more than the rich. This is already happening today.

Extreme heat and drought will make wildfires even more dangerous. More of us will be exposed to unhealthy smoke.

Many plants and animals will face extinction from habitat loss and other human threats.

As glaciers and ice sheets continue to melt, rising seas will flood many coastal communities, displacing hundreds of millions of people worldwide by the end of the century.

The ocean will get more acidic as seawater absorbs carbon dioxide from the air.

The water will keep getting hotter, too, which will help some marine animals but hurt others — including many that humans depend on for food.

That all sounds really bad. But it doesn’t have to be this way! There is still time to choose a different path. Although the science may be settled, the future is not.

The greenhouse gases we’ve already released will bring warmer temperatures, higher sea levels and ecological changes. But if governments, companies and all of us humans work together, we can cut emissions over the next few decades and avoid the worst effects of climate change.

In The Better Future, the effects of climate change would be slower and less extreme, so nature and society could adapt more easily. For instance, governments could help to move coastal communities farther inland where they’d be safer from flooding.

Wealthier countries, which have done the most to cause climate change, would help poorer countries cope with the effects.

This future would still bring large wildfires and poor harvest, but less often. We could protect forests and plant more trees, which suck some carbon back out of the air as they grow. Indigenous peoples with deep ecological knowledge could lead the way.

We could also eat differently in The Better Future. Many people could eat less meat than they do today. And our farms could grow crops that are well suited to the new climate and use sustainable farming practices.

The transformation would touch every part of society, including industry. We could invent ways of making concrete that emit much less carbon dioxide. We would live and work in energy-efficient buildings made of sustainable materials like wood and local stone.

In The Better Future, we would get around in cars that run on electricity and cleaner-burning fuels, instead of gasoline and diesel. This would also improve air quality in many communities.

Cities could encourage people to travel on public transit and bikes. Planes would still emit some carbon dioxide, but we could fly less.

Sunlight, wind and other renewable energy sources would provide electricity without producing more greenhouse gases. We could store extra energy to use later so that the lights stay on even when it’s cloudy or when there’s no breeze.

And here’s the good news: We already know how to make many of these changes. In fact, they’re already happening in many places — just not fast enough. That’s because the biggest challenges we face are not about science, they are about people.

World leaders and business people have to get serious about addressing climate change, and the rest of us have to help, if we want The Better Future to be the real future.

Will we do it? The choice is ours.