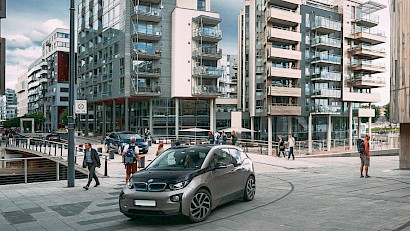 If you saw Will Ferrell taunt Norway in GM’s Super Bowl ad for electric vehicles, you already know that the Scandinavian country sells far more EVs per capita than the U.S. New stats show how far ahead they are than the rest of the world: In September, nine out of every ten new vehicles purchased in Norway were either electric or plug-in hybrids. Eight out of ten were fully electric.

In the U.S., EV sales are quickly climbing but still only make up around 5% of total sales. In the U.K., in September, electric and plug-in hybrid vehicles made up 21% of sales. In China, as of August, EVs made up 19% of sales.

Norway’s a leader, in part, because it got an early start in adopting policy to support electric vehicles. In an odd bit of historical trivia, the Norwegian synth-pop band A-ha played a role, working with an environmental group to stage publicity stunts with electric cars in the 1980s. By 1990, the country passed a law exempting EVs from import taxes. Later, other laws followed that gave EVs more tax incentives—a pass from paying tolls on toll roads, free rides on ferries, access to bus lanes, and free city parking (which was later phased out).

The policies didn’t have much impact, initially, because there were still few electric cars available for sale. But that started to change after Tesla launched. The country also invested heavily in charging infrastructure, and by 2017, started a program to add at least two charging stations every 30 miles or so, on every major road in the country.

In 2012, electric and plug-in hybrid cars made up just 3% of new car sales in Norway. By 2019, that had jumped to 56%. Now, the country wants to get to 100% EV sales by 2025—and it might actually succeed. The Norwegian Automobile Federation recently reported that if past trends continue, it’s possible that the last fossil fuel-powered vehicle in Norway might be sold as soon as next year. To get on track for climate goals, the rest of the world will have to catch up. Under current policies, according to a new report from the U.S. Energy Information Administration, the U.S. won’t meet targets for reducing emissions from transportation.