The U.S., like the rest of the world, has to reach net-zero emissions by the middle of the century for the planet to avoid the worst impacts of climate change—a goal that Biden has pledged to support. A new report says that there are multiple realistic paths the country can take to succeed, but all of them require the same eight things to happen before 2030.

Wind and solar capacity will have to grow by 3.5 times by the end of the decade while most electricity generation from coal is eliminated, cutting emissions in the electric sector by at least two-thirds. We’ll need a network of new electricity transmission lines, along with new pipelines for hydrogen and captured carbon dioxide, says the study, from the Department of Energy’s Lawrence Berkeley National Laboratory and the University of San Francisco along with the consultancy Evolved Energy Research. 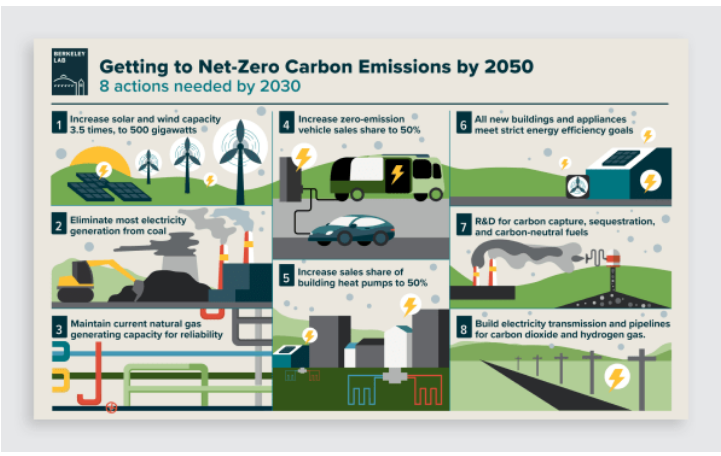 Zero-emissions vehicles such as electric cars will have to reach a 50% share of the market by 2030. Heat pumps, a renewable source of heat that can replace gas and other fossil fuels, will also have to reach a 50% share. New buildings and appliances will have to meet strict energy standards. We’ll have to work on developing new carbon capture and sequestration tech and carbon-neutral fuels., but the rest of the immediate transition can happen with existing technology.

“Fortunately, we don’t have to have a solution for every single thing already mapped out in order to proceed with what we need to do now,” says lead author Jim Williams, associate professor of Energy Systems Management at the University of San Francisco and a Berkeley Lab affiliate scientist. Last, even though natural gas will decline, the report says that we’ll have to maintain capacity as a low-cost source of power when renewables can’t meet demand. (Natural gas infrastructure could also later run on hydrogen made with electricity or other net-zero fuels.)

“There’s a lot that needs to happen over the next 10 years,” says Ryan Jones, cofounder of Evolved Energy Research, which looked at eight scenarios for reaching net zero as part of the report, using detailed models that included the entire energy system and every building and vehicle in the country. One of the challenges is the pace of adoption of new technology such as electric cars. “Based on our projections, pretty soon the range of an electric vehicle will be over 300 miles, and it will cost about as much as an internal combustion engine vehicle,” he says. “But we still have a little way to go in making it as convenient to drive, both in the time it takes to charge and the locations of chargers.”

Still, the transition doesn’t have to be immediate. The modeling, which looks at the lowest-cost ways to reach net zero, takes into account the natural lifetime of technology—people won’t have to replace their gas cars before they’d already buy a new car anyway, or immediately buy a more efficient refrigerator, for example. After 2030, we can take a variety of different paths. The researchers modeled what would happen depending on variables such as how fast consumers adopt technology or whether or not we choose to move fully to renewable energy; 100% renewable energy requires far more land than using some fossil fuels or nuclear energy, so it actually has some environmental trade-offs. In each case, the cost to implement the change is relatively low. In the middle-of-the-road scenario, the cost to build new infrastructure amounts to around $1 per person per day—and that ignores the economic benefits that will come from avoiding climate and health impacts. That’s far less than researchers expected just five years ago, when they did a similar study, because of the quickly falling costs of technology such as wind and solar.

It’s critical to make the transition carefully, says Williams. “If we don’t do this transition in a way that captures new technology jobs for American workers, if we don’t do it in a way that helps there be a decent and equitable transition for those who are in fossil fuel industries, this is not going to work,” he says. From a technology standpoint, the researchers are optimistic: It’s fully feasible to meet the goal of net zero. But we’ll also have to move much faster than we have in the past. “We have been slow to muster the collective will to make this transformation happen,” says Jones. “I think there needs to be a step change in the implementation effort for these pathways to come about in the time frame that we have described here.”