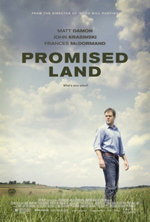 In Promised Land, Matt Damon stars as Steve Butler, a corporate salesman whose journey from farm boy to big-time player takes an unexpected detour when he lands in a small town, where he grapples with a surprising array of both open hearts and closed doors. Gus Van Sant helms the film from an original screenplay written by John Krasinski & Matt Damon, from a story by Dave Eggers.

Steve has been dispatched to the rural town of McKinley with his sales partner, Sue Thomason (Academy Award winner Frances McDormand). The town has been hit hard by the economic decline of recent years, and the two consummate sales executives see McKinley’s citizens as likely to accept their company’s offer – for drilling rights to their properties – as much-needed relief. What seems like an easy job and a short stay for the duo becomes complicated – professionally by calls for community-wide consideration of the offer by respected schoolteacher Frank Yates (Academy Award nominee Hal Holbrook) and personally by Steve’s encounter with Alice (Rosemarie DeWitt). When Dustin Noble (John Krasinski), a slick environmental activist, arrives, suddenly the stakes, both personal and professional, rise to the boiling point.